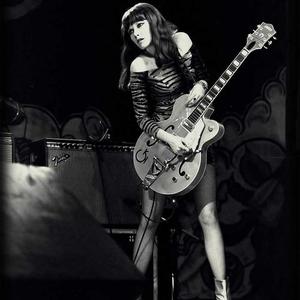 The Cramps were an American garage punk band formed in Sacramento, California in 1976. The band was influential in founding of a hybrid subgenre later known as "psychobilly," which is a fusion of punk and rockabilly. Their music is mostly in blues form, played at varying, (though usually fast) tempos, with a very minimal drumkit. An integral part of the early Cramps sound is dual guitars, without a bassist. The content of their songs and image is sleaze, trashy Americana (much in the style of filmmaker John Waters), sexual fetishism, clever bad jokes, and cheap, horror B-movie clich?s.

Their line-up has rotated much over the past couple of decades, with husband and wife Lux Interior and Poison Ivy--the lead singer and lead guitarist, respectively--as the only permanent members.
Lux picked up Ivy when he was driving on the highway. Ivy had raised her hand for an auto stop, Lux stopped his car and ...fate brought them together.

They were part of the early CBGB's punk rock movement that had emerged in New York, although they had formed several years earlier in California. The band is credited as a prominent factor in terms of influence on the gothabilly genre.

Their sound was heavily influenced by early rockabilly and proto-rock'n'roll like Link Wray and Hasil Adkins, 1960s surf music acts such as The Ventures, The Surfaris and Dick Dale, 1960s garage rock artists like The Standells, The Gants, The Trashmen, The Green Fuz and The Sonics, as well as the post-glam/early punk scene from which they emerged. They also were influenced to a degree by The Ramones as well as Screamin' Jay Hawkins, who is often credited for having pioneered their style of theatrical horror-blues.

On February 4, 2009, Lux Interior died of a pre-existing heart condition at the age of 62.

Albums & EPs:
Gravest Hits
Songs The Lord Taught Us
Psychedelic Jungle
A Date with Elvis
Stay Sick!
Look Mom No Head!
Blues Fix
Flamejob
Big Beat from Badsville
Fiends of Dope Island
Live albums:
Smell of Female
Rockin n Reelin in Auckland New Zealand
Singles:
"Surfin' Bird" / "The Way I Walk" "Human Fly" / "Domino" "Fever" / "Garbageman" "Garbageman" / "TV Set" "Garbageman" / "Drug Train" "Drug Train" "Goo Goo Muck" "The Crusher" "Faster Pussycat" "I Ain't Nuthin' But a Gorehound" "Can Your Pussy Do the Dog?" "What's Inside a Girl?" "Kizmiaz" "Get Off the Road" "Bikini Girls with Machine Guns" "All Women Are Bad" "Creature from the Black Leather Lagoon" "Eyeball in My Martini" "Let's Get Fucked Up" / "How Come You Do Me?" "Ultra Twist!" "Naked Girl Falling Down the Stairs" "Like a Bad Girl Should" "Big Black Witchcraft Rock"
Compilations
...Off the Bone Bad Music for Bad People How to Make a Monster The Secret Life of the Cramps

How To Make A Monster CD2

How To Make A Monster CD1