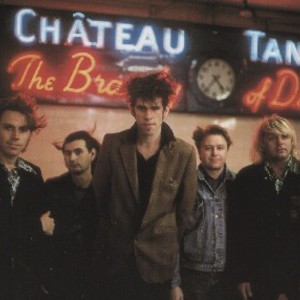 Beasts of Bourbon were an Australian rock 'n' roll band from Sydney, New South Wales that formed in 1983, with a line-up that has changed as the band splintered and reformed several times. Although they received limited commercial success, they are widely influential and critically acclaimed. They helped define Australian Swamp rock and are something of a supergroup, featuring line-ups of some of the most popular musicians of that sub-genre over many years.

The Beasts of Bourbon's music has often been compared to that of a rougher Rolling Stones (whose 'Cocksucker Blues' they covered), The Gun Club (who they played with and who some Beasts filled in for) and The Birthday Party. In Germany, the band were described as 'Muddy Waters on crack'. Their music is a tough amalgam of country music, blues, rock and roll and punk parsed through the garage sound of The Stooges and the drunken mayhem of Australian pub rock. It often touches on themes of depravity, morbidity, despair, drug abuse and violence.

The group were initially thrown together by vocalist Tex Perkins to fulfill a booking his previous band, Tex Deadly and the Dum-Dums, could no longer make. The band began playing together in small venues in Sydney. The initial version of the group included Spencer P. Jones of The Johnnys, Boris Sudjovic and Kim Salmon of The Scientists and James Baker of The Hoodoo Gurus. Recruited in large part because they were often found in the Southern Cross, an inner-city Sydney bar, these members form what is considered by some to be the 'classic' line-up. This lineup was featured on the band's first album, The Axeman's Jazz, recorded in 1984 in a single afternoon for one hundred dollars by Tony Cohen. The album was an excursion into deranged Gothic country and western, with a strong sense of irony and irreverence toward country music's clich?s. A cover of "Psycho" was a hit on alternative radio. Although the album became an underground success, the band continued, for the time being, to be just a side project for its members until 1988.

The Beasts of Bourbon grew from simply being a side project to become a true supergroup of the Australian pub rock scene. The original line-up fell apart in 1984 when the Scientists left Australia to tour overseas; fill-ins included Stu Spasm of Lubricated Goat and Brad Shepard of The Hoodoo Gurus. When both the Johnnys and the Scientists fell apart, however, the original line-up reunited in 1987, to record another album, Sour Mash in 1988. The swamp-rock of The Axeman's Jazz had given way to a fusion of blues-based pub rock and punk with great effect. Black Milk, recorded in 1990, expanded on this idea.

The band grew particularly confident and powerful while touring Europe on the back of Sour Mash and grew in popularity. In 1991, Baker and Sujdovic left to be replaced by Brian Hooper and Tony Pola - the bassist and drummer of Kim Salmon's new band, The Surrealists. This line-up (considered by other fans to be the 'classic' line-up) recorded the highly popular album The Low Road in 1991. The band disintegrated in Europe while touring to support the album.

A double album of live tracks and rarities, titled The Belly of the Beasts - Live '91 & '92 and shit we didn't put out the first time was released to mark the group's ten years together, and the group toured extensively in support of the album. Following the tour, it appeared as if the Beasts would announce their demise. Salmon left the group to concentrate on the Surrealists and Perkins' group The Cruel Sea was achieving huge success with their album The Honeymoon is Over.

In 1996, the group reformed with former Divinyl Charlie Owen on guitar and released Gone in 1997. The album received lukewarm reviews, but managed to produce a minor single in the form of Saturated. In 1997 the band went on hiatus.

In late December 2006 it was announced that Albert Productions had signed an exclusive worldwide recording deal with the band and they are set to unleash their new album ?Little Animals' on April 21st 2007.

Tex Perkins said ? The Alberts label releases have been a huge influence on the Beasts of Bourbon, so to be signed to this legendary label is not only a great honour and the start of an exciting new chapter in the bands history, it feels like?..Destiny?

Recently the group played alongside other Autralian bands and artists at the [Rockin' for Rights] concert which protested the unfair Workchoices legislation of the Howard Government.

After a show in Berlin in April 2008, the group cancelled their remaining tour dates and ended the band. Rumours say that a heated drunken argument between Tex Perkins and Spencer P Jones forced Spencer to return to Australia immediately with no intention of continuing the Beasts project.

From The Belly Of The Beasts CD2

From The Belly Of The Beasts CD1