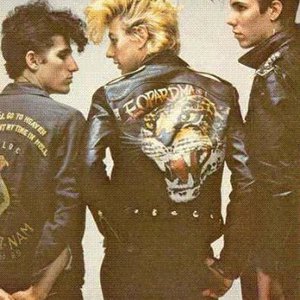 Stray Cats is a rockabilly band which formed in 1980 in Massapequa, New York, United States. The band consists of Brian Setzer (vocals, guitar), Lee Rocker (bass) and Slim Jim Phantom (drums). The band released two successful albums in the United Kingdom in 1981 before releasing their American debut album "Built for Speed" the following year. The band's singles "Stray Cat Strut" and "Rock This Town" were successful in multiple countries.

The group, whose style was based upon the sounds of Sun Records artists and other artists from the 1950s, were heavily influenced by Eddie Cochran, Carl Perkins, Gene Vincent and Bill Haley & His Comets. The Stray Cats quickly developed a large following in the New York music scene playing at CBGB and Max's Kansas City as well as venues on Long Island. When the Cats heard a rumor that there was a revival of the 1950s Teddy Boy youth subculture in England, the band moved to the UK. They then spearheaded the nascent rockabilly revival, by blending the 1950s Sun Studio sound with modern punk musical elements. In terms of visual style the Stray Cats also blended elements of 1950 rockabilly clothes such as wearing drape jackets, brothel creepers and western shirts with punk clothes such as tight black zipper trousers and modern versions of 1950s hair styles.

In the summer of 1980 the Cats found themselves being courted by the elite of the music world including Virgin Records, Stiff Records and Arista Records. Word quickly spread and soon members of The Rolling Stones, The Who and Led Zeppelin were at their shows. After a gig in London, Stray Cats met producer Dave Edmunds, well known as a roots rock enthusiast for his work with Rockpile and as a solo artist. Edmunds offered to work with the group, and they entered the studio to record their self-titled debut album, Stray Cats, released in England in 1981 on Arista Records. They had three hits that year with "Runaway Boys", "Rock This Town", and "Stray Cat Strut". The UK follow-up to Stray Cats, Gonna Ball, was not as well-received, providing no hits. Yet the combined sales of their first two albums was enough to convince EMI America to compile the best tracks from the two UK albums and issue an album (Built for Speed) in the U.S. in 1982. The record went on to sell double platinum in the US and Canada and was the #2 record on the Billboard album charts for 26 weeks

Musical and personal conflicts began to emerge in the ways that the individual members handled their new-found success; Phantom married actress Britt Ekland, while Setzer made guest appearances with stars like Bob Dylan and Stevie Nicks and became the concert guitarist for Robert Plant's Honeydrippers side project. In late 1984, the band added former BMT's guitarist and Long Island native Tommy Byrnes on second guitar and harmony vocals, and after a European and US tour which ended at the New Orleans World's Fair, parted ways.

Rocker and Phantom formed a trio called Phantom Rocker & Slick (the "Slick" being former David Bowie guitarist Earl Slick) which contained the single "Men Without Shame", guest musicians on this record included both Keith Richards of the Rolling Stones and Nicky Hopkins on the piano. Setzer went on to a solo career, retaining Byrnes and exchanging his rockabilly focus for a more wide-ranging roots rock/Americana sound on albums such as 1986's The Knife Feels Like Justice. In 1986, the Stray Cats reunited in Los Angeles, and recorded the covers-heavy Rock Therapy. In 1989, they reunited once again for the album Blast Off!, which was accompanied by a tour with US blues guitarist Stevie Ray Vaughan. No longer with EMI America, they entered the studio with Nile Rodgers for the record titled Let's Go Faster, issued by Liberation in 1990. After 1992's Dave Edmunds-produced Choo Choo Hot Fish, and after another covers album, 1993's Original Cool, the group called it quits again.

In 2004, the Stray Cats reunited for a month-long tour of Europe. A live album culled from those concerts, Rumble In Brixton, included one new studio track, "Mystery Train Kept A Rollin'." In 2007, they reunited once again for a successful and long awaited US tour with ZZ Top and The Pretenders. This was their first North American tour in over 15 years. In the 2000s, the band toured Europe as part of their Farewell Tour, although the band has performed concerts intermittently in the ensuing years.

In 2008, for the first time in 18 years, the Stray Cats visited Australia and New Zealand which included several consecutive sold out shows of their Farewell (Australia) Tour.

In April 2009 the band reunited for a single show to celebrate Brian's 50th birthday at the Fine Line Music Caf? in Minneapolis, MN.

Rocked This Town: From La To London (Live)

The Best Of Stray Cats