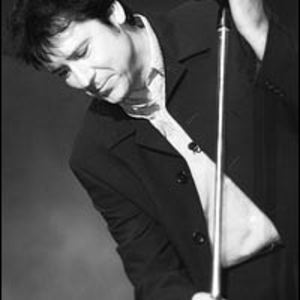 Shakin' Stevens also known as 'Shaky' (born Michael Barratt, 4 March 1948, in Ely, Cardiff, South Glamorgan, Wales) is a Welsh rock and roll singer, who has the distinction of being the top selling male UK singles artist of the 1980s. He began his career fronting Shakin' Stevens and the Sunsets, managed by Paul Barrett. The Sunsets were a 1950s influenced rock'n'roll outfit from Penarth, South Glamorgan.

He began his career fronting Shakin' Stevens and the Sunsets, managed by Paul Barrett. The Sunsets were a 1950s influenced rock'n'roll outfit from Penarth, South Glamorgan. An early break for the band arrived when they were given a support slot for The Rolling Stones in December 1969. Despite landing a recording contract with Parlophone Records the following year, the band found success hard to come by, at least in their native Great Britain, though they had hit singles in other countries. After seven years of constant touring and recording, Shaky left the band in 1977 and gained a lead role in Jack Good's "Elvis!" musical.

Regular TV appearances on the revamped TV show Oh Boy led eventually to his first chart success, a reworked version of a Buck Owens song "Hot Dog", which Owens would go on to re-record using Stevens arrangement which had been created by pedal steel guitar player B.J. Cole.

In 1979, Shaky signed what was to be his most successful management deal with Freya Miller, and in 1981, he had his first UK number 1 with "This Ole House" and would have 10 more songs reach the top 5, including three number 1 hits with "[track artist=Shakin' Stevens]Green Door", "Oh Julie" and "Merry Christmas Everyone", while "You Drive Me Crazy" and "A Love Worth Waiting For" reached number 2 in 1981 and 1984 respectively. His 1984 hit "Teardrops" featured Hank B. Marvin on guitar and Stevens has often featured famous musicians such as Albert Lee, Roger Taylor, Bonnie Tyler and more recently Tony Joe White on his recordings. In the mid 80s, Stevens reunited with former producer Dave Edmunds to record an album Lipstick, Powder And Paint and the Christmas smash "Merry Christmas Everyone".

The hits continued throughout the 1980s, making Stevens the biggest selling artist of the decade, and into the early 1990s. Chart successes also included his album Shaky reaching number 1.

It was in the 1990s, however, that Stevens took a lengthy break from recording and was stung by a court ruling requiring a substantial payout to former bandmates The Sunsets. In 1999, Shaky returned to performing and undertook tours that year and the year following. In 2004, things started to look up for Stevens he had a further platinum CD/DVD album in Denmark and a gold album in South Africa.

In 2005, he returned once again to the charts in the United Kingdom, with his greatest hits album The Collection, which reached the UK top 5. That year, he also appeared in the video to Tony Christie's and Peter Kay's #1 hit single "Is This the Way to Amarillo", alongside many other UK stars, including Ronnie Corbett, Jim Bowen, Michael Parkinson and Geoffrey Hayes. He was the winner on the reality television show, Hit Me Baby One More Time. This was quickly followed by a re-release of his cover and his own biggest hit sung in the show, ("Trouble" covering Pink's version) / "This Ole House"), which reached #20 on the UK Singles Chart in June 2005, his 33rd Top 40 hit in the United Kingdom.

In May 2007, Stevens released a brand new album in Denmark entitled Now Listen.

Echoes Of Our Times