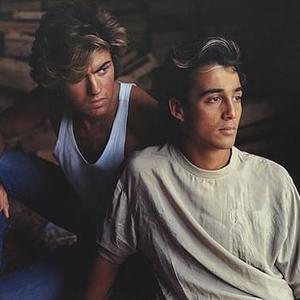 Wham! (often written WHAM!) was a pop band formed in 1981 from Bushey, England. They were briefly known in the United States as Wham! UK due to a naming conflict with another band. George Michael and Andrew Ridgeley met at Bushey Meads School in Watford, England. At first, they performed in a short-lived rock and roll band called The Executive. They then changed their name and signed with Innervision Records. Soon after a legal victory over Innervision, the duo was signed to CBS, Columbia Records in the United States and Canada and Epic Records for the rest of the world.

George Michael and Andrew Ridgeley met at Bushey Meads School in Watford, England. At first, they performed in a short-lived rock and roll band called The Executive. They then changed their name and signed with Innervision Records. Soon after a legal victory over Innervision, the duo was signed to CBS, Columbia Records in the United States and Canada and Epic Records for the rest of the world.

Further information: Artist development deal
Michael took on the majority of roles and responsibilities within the band? composer, singer, producer, and occasional instrumentalist? but the contribution of Ridgeley as the group's image specialist and spokesman was crucial to the band's initial success. Ridgeley convinced a reluctant George that Wham! needed to change their image and sound frequently, from the leather-clad moody singers of "Bad Boys" and "Young Guns (Go For It!)" to the more fashionable pop superstars of "Wake Me Up Before You Go-Go."

Still teenagers, they promoted themselves as hedonistic youngsters, proud to live a carefree life without work or commitment. This was reflected in their earliest singles. Such works as "Wham Rap! (Enjoy What You Do?)" have been seen as sarcasm advocating the other point of view.

The first record to be released by the band was "Wham Rap!". It was a double-A side with a Social Mix and Anti-social Mix. The record was banned for general release in the UK due to the profanity in the Anti-social Mix. In October 1982, their song "Young Guns (Go For It!)" was issued. The song was an appeal from one youthful lad to his friend to not throw his life away so early on marriage. It stalled outside the UK Top 40 but then Wham! got lucky when Top Of The Pops scheduled them. An important weekly BBC chart show on television, it had to look outside the Top 40 to fill a gap created by an act which had pulled out of recording. Nearest to the 40 mark and still climbing, Wham! was summoned, and a phenomenon immediately began.

The impact of Wham! on the public, especially teenage girls, was felt from the moment they finished their debut performance of "Young Guns (Go For It!)" on Top Of The Pops. Michael's appearance may have helped. He wore espadrilles, a suede jacket slit open, and rolled-up denim jeans. Ridgeley stood behind him, flanked by backing dancers D.C. Lee and Shirlie Holliman.

The performance was as much one of acting as it was of singing, with Michael playing the part of the pleading goodtime lad, and Ridgeley the guy who had been drawn into commitment. Afterwards, the song shot into the Top 40 at #24 and peaked at #3 in December. The following year (1983), D.C. Lee began her work with Paul Weller of The Style Council, and was replaced by Pepsi DeMacque. Holliman and DeMacque would later record music as Pepsi and Shirlie.

Wham! followed up "Young Guns (Go For It!)" with the reissue "Wham Rap! (Enjoy What You Do)", a song about the joys of a leisurely life (the full version of which clocked in at almost seven minutes long); "Bad Boys", about a strained relationship between a rebellious teenage lad and his worried parents; and "Club Tropicana", a satire of the Club 18-30 scene. Each song came with a memorable music video.

By the end of 1983, Wham! was rivaling Duran Duran and Culture Club as Britain's biggest pop act. Notoriety and column inches were duly achieved with their antics of placing a shuttlecock down their shorts, and their first album Fantastic reached #1.

Around this time, Ridgeley become conscious of legal problems with their initial contract at Innervision. He mounted a legal challenge against the record company and its founder Mark Dean, who had initially signed them to the label, and George publicly stated they were financially mistreated [citation needed]. While the legal battle raged (perhaps to raise much-needed funds for the fight), Innervision released a medley of non-single album tracks from Fantastic, entitled Club Fantastic Megamix. Wham! publicly denounced the move, and urged fans not to buy it. After all the legal wrangling, Innervision admitted there were royalty discrepancies with Wham!'s contract, leading to the bankruptcy and dissolution of Innervision.

Driven by Ridgeley, the duo changed their image, and Wham! returned in May 1984 with an updated, cutting-edge pop image quickly copied by other pop bands. Andrew changed the band's look from "moody in leather jackets" to smiles and fashionable clothing, with an aim to promote themselves more as sex symbols rather than spokespeople for a disaffected generation.

Fittingly enough, these changes propelled the next single (a pop standard) to the top of the charts around the world. Wake Me Up Before You Go-Go, a song Michael wrote from a note left to him in his hotel room one night by Ridgeley. The note was mistakenly written by Ridgeley as "don't forget to wake me up up before you go go, George". Since he accidentally wrote the word "up" twice, Ridgeley decided to compound the error and write "go" twice. It became their first UK #1 and rose to the top in the USA), capped by a memorable video of the duo, plus the ubiquitous Pepsi and Shirlie, wearing Katharine Hamnett T-shirts with the slogans CHOOSE LIFE and GO GO.

These t-shirts became essential fashion items as Hamnett wrote herself into the pop culture lexicon, having simultaneously designed the FRANKIE SAY t-shirts for Frankie Goes to Hollywood.

Although some critics felt that Wham! represented bubblegum pop[citation needed], many were starting to appreciate Michael's proven ability as a songwriter and capable vocalist. (The following year, he would win the Ivor Novello Award for songwriting.) However, at the same time they bemoaned the status of Ridgeley, who had started to "play" a guitar during live shows (never on any recordings) but whose overall contribution was deemed to be lightweight[citation needed].

With some bizarre contradiction, the next single "Careless Whisper" was issued as a George Michael solo piece, yet unlike any Wham! single since "Wham Rap!," it was co-written by Ridgeley. The song quickly reached #1. In the autumn of 1984, Wham! came back as a duo with "Freedom", another chart-topper. In November, they released their second album, Make It Big, which coasted to #1 on the album charts. The band set off on another arena tour at the end of '84, and George told Smash Hits magazine at the time that he had written a song called "Stephen." The song had been composed for a friend who was struggling to cope with bereavment. While this song is still unreleased, those that were at the recording sessions decsribe it as a heartfelt story of the loss of a loved one[citation needed].

George contributed to the Band Aid project, with Michael providing vocals as the song usurped their own Christmas release, "Last Christmas"/"Everything She Wants", the former of which featured a video set in a ski resort.

The single became the highest-selling single ever to peak at #2 in the UK charts. As such, Wham! donated all their royalties to the Ethiopian famine appeal to coincide with the fundraising intentions of Band Aid, the song which beat them to the top spot. Band Aid's success meant that Michael had been at #1 within three different entities in 1984?as a solo artist, half of a duo, and part of a charity ensemble.

Michael desired to create music targeted to a more sophisticated audience than the duo's primarily teenage fanbase. Therefore, Michael and Ridgeley announced the breakup of Wham! in the spring of 1986, destined to take place after a farewell single and album, along with a historic grand finale concert at Wembley Stadium on June 28, 1986, called The Final. British pop group Five Star declined George's invitation to be the supporting act, saying they needed to concentrate on their own career at the time.

If You Were There (The Best Of Wham!)

Music From The Edge Of Heaven

Wake Me Up Before You Go-Go (Japanese Edition) (VLS)

Everything She Wants (VLS)