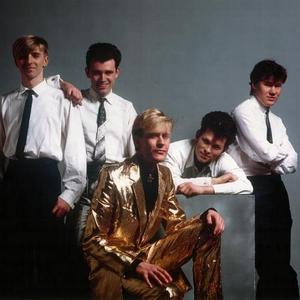 ABC (often spelled with three stars) are a british new wave band from Sheffield, England fronted by singer Martin Fry. They charted ten UK and five US Top 40 singles between 1981 and 1990. Their last album Traffic was released in April 2008. The group's first single, "Tears Are Not Enough", made the UK Top 20 in 1981. Soon afterwards, David Robinson left the band and was replaced by drummer David Palmer.

The group's first single, "Tears Are Not Enough", made the UK Top 20 in 1981. Soon afterwards, David Robinson left the band and was replaced by drummer David Palmer. In 1982, the band released their debut album The Lexicon Of Love, which reached number one in the UK Albums Chart. Produced by Trevor Horn, it often featured in UK critics' lists of favourite albums: it ranked 42nd in The Observer Music Monthly's "Top 100 British Albums" (June 2004) and 40th in Q magazine's "100 Greatest British Albums" (June 2000). The band had three Top 10 hits during 1982: the singles "Poison Arrow", "The Look Of Love (Part 1)" and "All Of My Heart" and shot high-concept music videos.

ABC found it difficult to follow up their debut. The second album, Beauty Stab, was released in November 1983. It performed poorly in comparison to its predecessor. Gary Langan, who had engineered The Lexicon of Love, produced the effort. The first single, "That Was Then But This Is Now", briefly appeared in the UK Top 20, followed by a Top 40 showing for "S.O.S.". The band eschewed remixes for the project, and the 12" single for "That Was Then but This Is Now" featured the disclaimer "This record is exactly the same as the 7" version. The choice is yours." Stephen Singleton retired from the band in 1984.

Now a duo of Fry and White, augmented by two non-performing band members, Fiona Russell-Powell (known as Eden) and David Yarritu, ABC's chart fortunes in the UK dwindled further with the 1985 album How To Be A Zillionaire. Keith LeBlanc from Tackhead programmed much of the beatbox work for the album. The group did score its first US Top 10 hit with "Be Near Me" (which also made the UK Top 30). The album also featured the singles "(How To Be A) Millionaire", "Vanity Kills" and "Ocean Blue". ABC was one of the first bands to do video scratching" for several videos from the How to Be a... Zillionaire album, including the video for "Be Near Me".

Following a hiatus. while Fry was treated for Hodgkin's disease, ABC returned with Alphabet City. Best known for "When Smokey Sings", a tribute to Smokey Robinson, the album also spawned "The Night You Murdered Love" and "King Without A Crown" as singles. All three tracks would make the CD version of the group's first anthology.

In 1989, the duo issued Up, their fifth and final PolyGram studio album. This time experimenting with house music, ABC scored a minor UK hit with the single "One Better World". They then released another single, "The Real Thing". During this period the group worked on a couple of outside productions aimed at the house music scene. One was Paul Rutherford's (Frankie Goes to Hollywood) solo album and first single release; the other was for Lizzie Tear on the group's own Neutron label.

In 1990, the band released a greatest hits compilation album, Absolutely. This covered all of ABC's albums up until 1990, and featured all of their singles. The compilation made the UK Top 10. A video package featuring promos was also released. One new song, "The Look Of Love (1990 Remix)", was released to promote the package.

The group then moved to the EMI label (and MCA in North America), where they recorded the 1991 LP Abracadabra. "Love Conquers All", the first single, barely placed in the UK chart, though Italian production team Black Box provided remixes of "Say It" which appeared in the US dance chart.

Fry resurrected the band's name in 1997 for the album Skyscraping, an homage to several of his musical heroes, including David Bowie, Roxy Music, and the Sex Pistols. A collaboration with Glenn Gregory of Heaven 17 and Keith Lowndes, the album again was met with critical approval rather than broad commercial success. However, three singles were released, "Rolling Sevens", "Skyscraping", and "Stranger Things", complete with extra B-sides.

In 1999, ABC released their first live album, The Lexicon Of Live. The album covered most of their major hits. Although Fry was the only member left, he had a backing band and adorned the album cover in his trademark gold lam? suit.

Look of Love: The Very Best of ABC was released in 2001. Although essentially a reissue of greatest hits package Absolutely (from 1990), the album featured two new songs by Fry titled "Peace And Tranquility" and "Blame". A companion DVD, along with a bonus disc of remixes, was also released.

In 2004, the VH1 show Bands Reunited attempted to get the line-up of Fry, Palmer, Singleton and White together for a reunion concert. Fry and Palmer appeared and played together (with help from Nick Beggs of Kajagoogoo) for the first time in over twenty years. Singleton and White opted not to participate.

Following a tour of the United States in May and June 2006, Fry and Palmer, together with keyboardist Chuck Kentis, put together a new ABC album, Traffic. It was released on 28 April 2008. Gary Langan, who worked on The Lexicon of Love and Beauty Stab, mixed and produced the album. The first single, "The Very First Time", debuted on BBC Radio 2 in January, was added to the station's "A" playlist for the week beginning 29 March, and was released as a download track on 1 April. ABC performed two songs from Traffic during the 2008 Regeneration Tour of the US; "Ride" and "The Very First Time".

On 1 September 2007, ABC performed a set with other 1980s acts at Retrofest at Culzean Castle in Ayrshire, Scotland. This appearance included a rendition of "Addicted to Love", with Tony Hadley of Spandau Ballet and Peter Cox of Go West.

In the summer of 2008, ABC toured the US as part of the 2008 Regeneration Tour, which also featured The Human League, Belinda Carlisle, A Flock of Seagulls, and Naked Eyes.

In April 2009, ABC performed the Lexicon Of Love album live at the Royal Albert Hall, accompanied by the BBC Concert Orchestra. Anne Dudley of Art of Noise, who arranged and played keyboards on the original record, conducted the performance. A music review in the 13 April 2009 edition of The Independent newspaper, described the performance as a "glorious night that has placed one of the Eighties' most perfectly constructed albums back near the top of the pop pantheon".

In 2009 ABC toured the US as the headliner of the 2009 'Regeneration Tour', which also featured Terri Nunn of Berlin, Wang Chung, and the Cutting Crew.

Based On Mars (EP)

The Lexicon Of Love II

The Lexicon Of Love (Live With The Bbc Concert Orchestra)