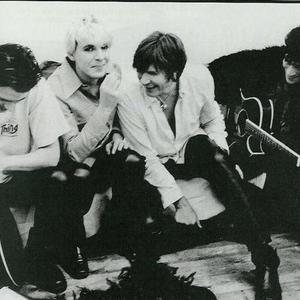 Duran Duran (named after a character in Roger Vadim's sci-fi classic, Barbarella) is an electronic pop-rock band that was part of the new wave music movement in the early 1980s. Created by Nick Rhodes (keyboards) and John Taylor (bass) in Birmingham, UK, 1978, with the later addition of Roger Taylor (drums), Andy Taylor (guitar), and Simon Le Bon (lead vocals), the band has sold more than 100 million records, making them one of the best-selling bands in history.

Their songs are vivid, hook-laden pop that have usually fared well on the radio, but what many remember best about Duran Duran is their iconic music videos. Though many of the videos were tongue-in-cheek, the band never quite escaped the glamorous and decadent jet set image their early videos projected.

Their first singer and original founding member was Stephen Duffy and the original bassist was Simon Colley. Several drummers and guitarists were subsequently tried, as well as a handful of vocalists after Duffy left Duran Duran early in 1979.

In 1985, Duran Duran performed the title sequence theme for the James Bond film "A View to a Kill." In 1987, "Out of My Mind" was featured at the end credits of The Saint.

Like Depeche Mode, Duran Duran was among the earliest bands to work on their own remixes. From the very beginning, the band had a keen sense of style, and worked with stylist Perry Haines and fashion designers such as Kahn & Bell and Antony Price to build a sharp and elegant image, soon growing beyond the ruffles and sashes of the pirate-flavoured new romantic look.

Although the group never disbanded, it went through several line-up changes over the years - American guitarist Warren Cuccurullo (formerly of Missing Persons) was also a member of the band from 1989 to 2001, and drummer Sterling Campbell was a member from 1989 to 1991. John Taylor, Roger Taylor and Andy Taylor all returned in 2001 and created a stir among music media and the band's fans. Duran Duran released the first album from the reunited line-up, Astronaut, in 2004, which was in turn followed up by many sold out shows in England, most notably Wembley Arena, where a live DVD of the tour was filmed in 2004/2005.

In October of 2006, it was announced on Duran Duran's website that Andy Taylor had left the band. The band's latest album, 'Red Carpet Massacre' was released in November 2007. They performed the album live in New York City on Broadway at the Barrymore Theater, for what was originally scheduled as an unprecedented 10-night run. A stage hand union strike shortened the run by a few nights, but Duran Duran were able to re-schedule the shows elsewhere. They went on to tour the world, ending their successful run in December of 2008.

2008 also saw the release of a new DVD that documents the making of their now-classic "Rio" album (called "Classic Albums: Rio (Collector's Edition)"), and a book called "Would Someone Please Explain?"- a compilation of questions from the "Ask Katy" area of their popular website.

Duran Duran returned at the end of 2010 with their 13th album, the digital and self-released album All You Need Is Now which debuted at number one on the iTunes charts in many countries (including the USA). The physical version of the album will be released with bonus tracks in February 2011. The album was produced by Mark Ronson.

A Diamond In The Mind (Live)

All You Need Is Now (Deluxe Edition)