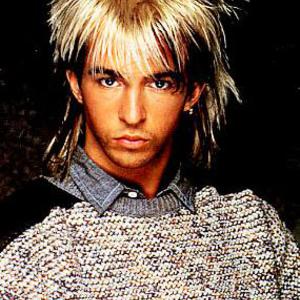 Christopher Hamill (born December 19, 1958) in Pemberton, Wigan, Lancashire, England, United Kingdom, better known by his stage name Limahl, was the lead singer of the 1980s pop band Kajagoogoo and subsequently enjoyed a solo career. He adopted his stage name (an anagram of his surname) at the time he was recruited by the existing members of Kajagoogoo. An advert was placed in a music magazine asking for a 'front man who could sing and look good'.

He adopted his stage name (an anagram of his surname) at the time he was recruited by the existing members of Kajagoogoo. An advert was placed in a music magazine asking for a 'front man who could sing and look good'. Soon after he had joined, the group released their first single "Too Shy" which went to number one in the UK charts and the top five on the Billboard Hot 100.

However, Limahl never enjoyed good relationships with the rest of the band, and later in 1983, the others in the band fired him after an acrimonious dispute. Defenders of Limahl claim that the band struggled with fame and Limahl's popularity was proving too much of a diversion from the music. Limahl accused the others of being jealous and told the press that "I've been betrayed!" and that "I was sacked for making them a success."

After leaving the band, Limahl launched a solo career, achieving hits with "Only For Love" and the title theme to the film The NeverEnding Story. He hit hard times after 1984, although he could enjoy a sense of schadenfreude from the low profile of Kajagoogoo after he had left. In the late 1980s, he was photographed coming out of a job centre. The pictures were published in a Sunday newspaper, highlighting a story of how the once mighty can fall.

When the boom for 80s nostalgia began, Limahl began to wear an orange wig identical to his original Kajagoogoo hairstyle and started playing gigs, performing the hits he had with the band and by himself. His willingness to send himself and the whole era up gained him plenty of respect, and other declined acts of the 1980s followed him back on to the stage.

In 2004, Limahl took part as a contender in musical reality show Comeback on German TV (Pro7). A year later, he appeared in a similar UK show Hit Me Baby One More Time (ITV).

Limahl shared a flat with disc jockey Paul Gambaccini during his heyday, leading to rumours in the tabloid press that the two were lovers, a claim which both denied.

Colour All My Day