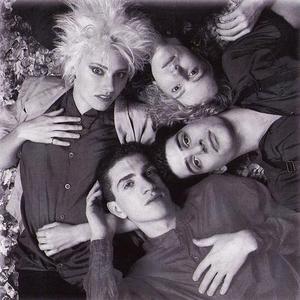 After The break up of The Young Snakes, 'Til Tuesday,an American new wave band, was formed in Boston in 1982. Its original lineup was bassist/vocalist Aimee Mann, guitarist/vocalist Robert Holmes, keyboardist Joey Pesce, and drummer Michael Hausman. The group first gained fame six months after its formation when it won radio station WBCN's battle of the bands competition in 1983. Their original composition "Love In A Vacuum" (credited to all members of the group) received a fair amount of airplay on the station, and the group was eventually signed to Epic Records.

The group first gained fame six months after its formation when it won radio station WBCN's battle of the bands competition in 1983. Their original composition "Love In A Vacuum" (credited to all members of the group) received a fair amount of airplay on the station, and the group was eventually signed to Epic Records.

"Love In A Vacuum" was re-recorded for the Epic debut album, 1985's Voices Carry; however the breakthrough song turned out to be the title track. The "Voices Carry" single peaked at US #8, and is said to have been inspired by an argument between Mann and Hausman, who had broken off a relationship before the album's release.

The band became an early MTV staple with the "Voices Carry" video, which depicts an oppressive boyfriend trying to convert Mann to his upper-class lifestyle; she finally lashes out at him during a concert at Carnegie Hall, standing up from her seat in the audience and belting the lyrics, "He said, shut up! He said, shut up! Oh God, can't you keep it down?..." as she removes her cap to reveal her signature spiky, rat-tailed hair. As a result, the group won that year's MTV Video Music Award for Best New Artist.

By the 1986 follow-up Welcome Home, Mann was beginning to write more of the songs herself and the band was moving away from the slick New Wave sound of their debut. But while critical reaction was generally strong, the number 26 placing for the lead single "What About Love" was a commercial disappointment, especially after the top 10 success of "Voices Carry". Even more problematic, the album just barely sneaked into the US top 50, also a letdown after the #19 placing for their first LP.

After the album's release Pesce left the band and was replaced by Michael Montes. Guitarists Jon Brion and Clayton Scoble also joined the group, although not as permanent members.

At about the same time, Mann's two-year relationship with singer-songwriter Jules Shear, whom she had been dating since the release of the Voices Carry album, came to an end. This breakup somewhat informed the band's final album, 1988's Everything's Different Now, particularly in the song "J for Jules," though Mann insisted that not every song on the LP was about the relationship. Shear collaborated with Matthew Sweet on the album's title track; it also featured "The Other End (of the Telescope)," a collaboration between Mann and Elvis Costello on which Costello provides a guest vocal.

Unfortunately, while critical praise continued to flow, Everything's Different Now was a commercial dud. The album peaked at a mere #124, while the lead single "(Believed You Were) Lucky" (co-written with Shear) crawled to #95.

'Til Tuesday essentially broke up after the release of Everything's Different Now. However, Mann toured under that name as a solo artist while legal problems with the band's label Epic prevented her from beginning work on a solo record for several years. Hausmann, meanwhile, became Mann's manager, a position he holds to this day.

Coming Up Close: A Retrospective