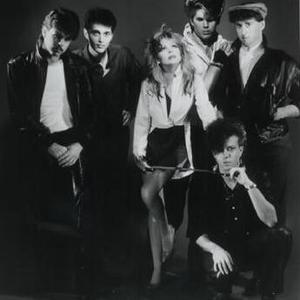 1)Berlin is an American new wave Band 2)Berlin (??????) is also a Japanese Visual Kei Band 3)Berlin was also a Swedish punk band ****** 1)Berlin is an American new wave band featuring lead singer Terri Nunn. Berlin was formed in Orange County, Southern California in 1979. Their first single, "A Matter of Time," was released in 1980 on I.R.S. Records and featured replacement vocalist Virginia Macolino on lead vocals after Nunn had temporarily left the band to pursue an acting career.

Their first single, "A Matter of Time," was released in 1980 on I.R.S. Records and featured replacement vocalist Virginia Macolino on lead vocals after Nunn had temporarily left the band to pursue an acting career. Toni Childs also sang for Berlin briefly before Nunn rejoined the act and their indie released singles and EP Pleasure Victim became a regional hit in LA selling 30,000 copies before they signed with Geffen.

Their first significant hit was the controversial synth-driven "Sex (I'm A...)" (1982), which was banned by some radio & tv stations due to its graphic lyrics and risque video. They had two other early hits: "The Metro", which was later covered by System of a Down, Alkaline Trio, and Sleepthief; and "No More Words", who's subsequent video saw Terri Nunn and bandmates re-enact a Bonnie and Clyde style car chase and shoot-out. Despite their new wave dance club roots, it was the MOR ballad "Take My Breath Away" (from the movie Top Gun) that became their best-selling platinum selling single in 1986.

Aside from Nunn, the core members of the band were founding member John Crawford (primary songwriter, bass guitar & keyboards), and David Diamond (keyboards & guitar). Other members of the band included Ric Olsen (lead guitar), Matt Reid (keyboards), Rob Brill (drums) and Rod Learned (drums). Berlin officially disbanded in 1987 and Nunn retained the legal rights to usage of the band's name after legal wranglings with the founding member of the group, John Crawford. Terri Nunn recreated Berlin (with a new lineup of musicians) in 1999.

They were featured recently on the VH1 show, Bands Reunited where they all agreed to get back together to not only reunite as friends but as a band. They played one show at The Roxy in California to a sold-out crowd.

Terri Nunn has said she was somewhat taken aback by the success of "Take My Breath Away" on adult contemporary radio stations, since none of Berlin's singles up to that point had been suitable for AC radio. She is quoted in The Billboard Book of Number One Hits by Fred Bronson as saying that the first radio station she heard playing it was "something my mom listens to."

All The Way In (With Terri Nunn)