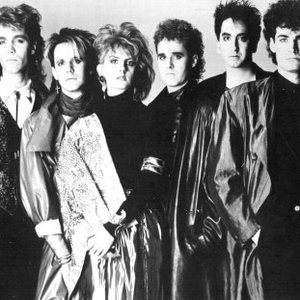 Animotion is a 80's New Wave/synthpop band best known for their songs Obsession (originally recorded and written by Michael Des Barres and Holly Knight of Device), Let Him Go, I Engineer and Room To Move. Formed in Los Angeles, United Statesin 1983 by Astrid Plane from the remnants of a retro science-fiction band called Red Zone, they signed a record deal with Polygram Records in 1984 and made three albums: Animotion, Strange Behavior and Animotion [1989]. In the late of 2011 they started recording their new album that is due to be released in 2012/2013.

Astrid invented the name Animotion to convey energy and emotion. They recruited former L.A. Red Zone band members Frenchy O'Brien (drums), Paul Antonelli (keyboards) and Charles Ottavio (bass). Larry Ross (manager) quit CBS records to become their full time manager and he brought in Bill Wadhams (lead vocals + guitar) to front the band with Astrid. Another keyboard player was brought on board that same year when Greg Smith joined the band, together with lead guitarist Don Kirkpatrick. In March 1984 they did a showcase for Russ Regan of Polygram Records and inked the deal soon after. KROQ in Los Angeles, put Obsession on heavy rotation in December 1984.

Frenchy O'Brien left the band before the recording of Strange Behavior and was replaced by Jim Blair. In the midst of recording their third album Animotion went through personnel changes as all three of the remaining founding members (Bill Wadhams, Astrid Plane and Charles Ottavio) departed. Following their departure, Ottavio and Plane married. Actress/dancer/singer Cynthia Rhodes, known for her performance as the character "Penny Johnson" in the 1987 film Dirty Dancing, replaced Plane as female lead singer. Former solo artist/Device member Paul Engemann replaced Wadhams as the male lead for Animotion's second self-titled album. When their third record did not live up to the chart expectations, the band split in 1990.

In 2001 by special request from Alex Hart of KNRK in Portland, Oregon and with mega-effort from Bill, Animotion - once again with Astrid on lead vocals - reunited. In a display combining energy, emotion and intensity they played to a sold-out crowd. The band all agreed that it felt like magic to be onstage together again and Animotion Version 2001 was launched with Astrid Plane (lead vocals), Bill Wadhams (lead vocals + guitar), Charles Ottavio (drums), Don Kirkpatrick (lead guitar), Greg Smith (keyboards) and Kevin Rankin (drums).

Obsession: The Best Of Animotion