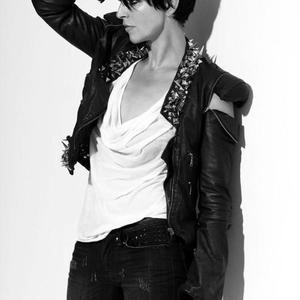 Nena (born Gabriele Susanne Kerner on 24 March, 1960 in Hagen, Nordrhein-Westfalen, Germany) acquired her nickname "Nena", which means "baby girl" in Spanish, at the age of 3 during a vacation to Spain. Her first band was called The Stripes (1979). They had a very minor hit with the song "Ecstasy", but never managed to achieve broad success. The band Nena was formed with Nena (singer), Rolf Brendel (drums), Carlo Karges (guitar), Uwe Fahrenkrog-Petersen (keyboard) and J?rgen Dehmel (bass) in Berlin in 1981.

Her first band was called The Stripes (1979). They had a very minor hit with the song "Ecstasy", but never managed to achieve broad success.

The band Nena was formed with Nena (singer), Rolf Brendel (drums), Carlo Karges (guitar), Uwe Fahrenkrog-Petersen (keyboard) and J?rgen Dehmel (bass) in Berlin in 1981. Their first hit single, "Nur getr?umt" ("Only In Dreams"), came in 1982 after appearing on the German television program Musikladen.

The following year they released their self-titled first album, which contained the singles "99 Luftballons" and "Leuchtturm" ("Lighthouse"). "99 Luftballons" was a #1 hit in many countries (including the U.S.) and an English version of the song, "99 Red Balloons", was recorded, and retains some measure of cultural influence, being referred to in current music - the Guster track Amsterdam. The song also featured in an episode of Scrubs, Gilmore Girls the film, Grosse Point Blank, and most recently the movie Watchmen. Nena then released ? (Fragezeichen) in 1984, Feuer und Flamme ("Fire And Flame", means "to be all for it") in 1985, Eisbrecher ("Icebreaker") in 1986. During her success in the UK, Nena was also famous for having hairy armpits, which in the UK was unusual for a woman to have.

Nena started dating Swiss actor Benedict Freitag shortly after the breakup of the band in 1987, and together with him had a son, Christopher Daniel, who was born disabled due to medical mistakes made during the birth that caused Nena to go into cardiac arrest. He died at the age of 11 months. She later had twins with Freitag, Larissa-Maria and Sakias Manuel.

After splitting with Benedict Freitag, Nena began a relationship with drummer and music producer Philipp Palm of Stuttgart, with whom she has two children, Samuel Vincent and Simeon Joel. The couple and the four children live together in Hamburg.

Throughout the 1990's, Nena released solo albums, including some children's albums. In 1999, Nena voiced the character Lea in the animated film Tobias Totz und sein L?we.

In 2002, Nena celebrated her 20th stage anniversary with the album "Nena feat. Nena," a CD of self-covers of old hits. This jubilee album meant an incredible comeback for Nena that has hardly ever been seen before in German music business. Nena's 2005 album "Willst du mit mir gehn" ("Do You Wanna Date Me?") quickly achieved platinum status as well. The first single from "Willst du mit mir gehn", "Liebe ist" ("Love Is"), shot to Number 1 in the German charts in early 2005.

9th October 2007 Nena released the album "Cover Me", an album composed entirely of cover songs with songs both in English and German.

In 2007, she co-founded the school "Neue Schule Hamburg".