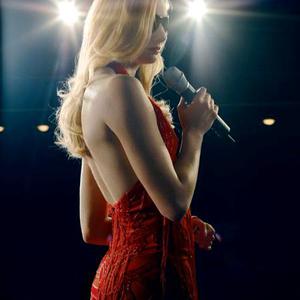 Joana Zimmer (born 27. October 1979 in Freiburg), born to a German mother and an American father, would live the first five years of her life in the states, but eventually moved to Berlin at the age of 5. She soon discovered her love for music and the talent to entertain. Already in her teenage years she appeared in jazz clubs, and also earned some money with modeling jobs. These first financial possibilities were used for her first demo tapes, which - altogether with an unbelievable tenacity and stubbornness - eventually landed her a recording contract.

In 2005 she was the rising star in her native with the Marcella Detroit cover "(I Believe) Give a Little Bit", followed by "I've Learned to Walk Alone" and "Let's Make History (duet with David Bisbal)". Her debut album, My Innermost, reached #5 in the German album charts, yielded two golden records and proved Joana's aspiration for an international career. Jubilated live shows and various awards followed. In late 2006 she commenced works on her second album, "The Voice in Me", with its first single "Bringing Down The Moon". For a BRAVO sampler she also recorded the Art Garfunkel song "Bright Eyes".

The tough singer is also sporty and participated in the Berlin-Marathon in summer 2004. She is also ambassadress of CBM (Christoffel-Blindenmission - Christoffel mission of the blind). Her untamed will and outstanding voice surely make her the most serious contemporary female German singer, other than Sarah Connor.

The Voice In Me