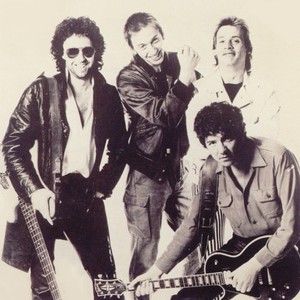 1) After the Fire was a British prog rock/new wave band that originally formed in 1971 in London, England. They are one of a small group of acts to be a one hit wonder in both the UK and US with entirely different songs (1979's "One Rule for You" and 1982's "Der Kommissar", respectively).

The band originally formed in 1971/early 1972 with Peter Banks on keyboards, John Leach on bass and Ian Adamson on drums. The original group disbanded in December 1972. Peter went on to play keyboards for Narnia, playing alongside John Russell.

In 1974 Peter and Ian decided to breathe new life into ATF and started auditions for a guitar player. Andy Piercy approached the pair, and after a settling of opinions the Piercy/Banks partnership was formed. The early material took the form of Christian stories. In 1975 Robin Childs joined the band as a bass player.

In 1977 Robin left, replaced by Nick Battle and Ian left to be replaced by a "strange" drummer, Ivor Twidell. By late 1977 Nick had decided to leave but was persuaded to stay to record Signs of Change.

Signs Of Change was released on a private label out of frustration with the Christian record labels who insisted that bands pay up-front. It was an outstanding album for it's time, well thought through and brilliantly executed. The six tracks are reminiscent of early Genesis and Yes, synth-lead with good-sized instrumental breaks. The album had a limited release of 4000 copies and with an even more limited number including a lyric sheet insert - printed white hand written lyrics on black. The album was distributed by mail order.

ATF moved on musically and with Nick leaving Andy switched to bass (not before various bass players had appeared with the band) and John Russell joined the band as the new guitarist, after seeing the band playing at a pub.

The band was eventually signed up by CBS in 1978 and started recording in the winter. During the production of the Laser Love album no less than 5 producers worked with the band (the band also produced 2 tracks), leaving the final release a little dis-jointed. Some of the tracks were recorded twice by different producers.

During August 1979 the band played the Greenbelt festival for the last time (having been regulars in the past few years) - everything about the bands appearance was electric, from the sound check in the early afternoon to the fireworks that finished the overrun evening performance. It gave the band a chance to air the new tracks before the release of the new album in October 1979.

Ivor left the band in October 1979 after ill health led to his collapse on stage, he was replaced by Nick Brotherwood. The band started work on a new album - 80-f. It was turned down by CBS and led to yet another change in drummer, however, the album contained some excellent tracks like Operator that never saw the light again. An acetate of the album is in existence. This delay cost the band a US tour.

Pete King, ex-Flys drummer, was recruited as the new drummer and quickly filled the role. His style matched the band and he settled in as the band started re-recording the album with Mack as the producer. The album was released with two singles, which again, never got the airplay they deserved. The album sold well in Germany and the band released Sternenflug - a German version of Starflight.

1981 saw the band touring extensively abroad, along with appearances on Old Grey Whistle Test and Rock Goes To College.

The album Batteries Not Included was the most polished release, and sadly the bands last release of new material. The singles did well in London, kept high in the Capital Radio phone votes, but the sales did not reflect this masterpiece.

Demos for a new album were being made.

In 1982 the band appeared on Swap Shop and toured with ELO (Pete King filled for Bev Bevan after he was taken ill), Queen and Van Halen on a fifty-one date tour of America in ninety-nine days. Half way through the tour CBS heard the demo tracks the band had recorded for a new album and requested they return to start in the recording studio. The band, funded by Harvey Goldsmith decided to stay on the tour - they returned in a lot of debt. The band was still not making the money nor had the public backing they needed.

The band announced the split in December 1982 at the Dominion Theatre - their last concert and one of the best. Without the ties of management and record companies the band flowed through the set, relaxed and backed by the crowd.

The band had been pulling in two directions with Andy and John wanting to move the music in a rock direction and the two Peter's wishing to go more pop.

The last single release by the band was Der Kommissar, a Falco hit. The single was a worldwide hit and CBS asked the band to reform but to no avail. Andy returned to the recording studio with John and various session musicians, a re-work of DANCING IN THE SHADOWS was released and a new single 8 Ball in the top pocket followed. The single never achieved airplay and was withdrawn shortly afterwards - the 12" slipped out without notice.

CBS released Der Kommissar - a greatest hits album, to cash in on the single and re-released it with reworked Dancing In The Shadows, One Rule For You and Starflight.

The bands revival was short lived and CBS finally laid the project to rest, abandoning the release of the album Free Heat.

John went on to form Press Any Key with his brother Rob, Andy started a solo career and went on to produce. Pete Banks and Pete King started working on a new project called Zipcodes and a tape was released after the death of Pete King in 1987.

The reworked Der Kommissar was released by Sony recently - the only album to make CD.

Although the band reunited for a couple of special events, things lay dormant until 2004 when Peter Banks and John Russell agreed to take part in a 'Friends' (the After The Fire fan club) reunion where, with John's son Matt on drums and bassist Ian Niblo, they played an informal Karaoke set for brave fans to perform their favourite tracks. Despite a gap of 'some' years it seemed that the fan-base for the band had never deserted them, they were just resting!

This spurred a flurry of activity, resulting in the recruitment of ex-Zipcodes cohort Keith Smith on vocals and a return to The Greenbelt Arts festival in 2004 for a full-on comeback gig some 25 years after the band last played there. A hot and sweaty venue was crammed to capacity where fans were treated to both a trip down memory lane and a band playing timeless classics.

The make-up of the band is different. The charts have moved on. But the band who played over 300 gigs, toured with ELO, Queen, Van Halen and shared a BBC In Concert stage with U2 are back and ready to start a new chapter in their history.

This new phase has seen the release of the bands back catalogue, a 'warts and all' official bootleg of the comeback at Greenbelt on DVD and the release of a single in support of Christian Aid's Trade Justice Campaign, part of the MAKEPOVERTYHISTORY initiative.