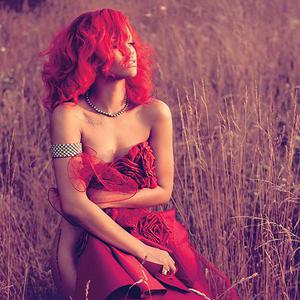 Robyn Rihanna Fenty (born February 20, 1988), known by her stage name, Rihanna, is a Bajan singer. Her song Umbrella was one of the highest-selling songs of 2007 and her 3rd album Good Girl Gone Bad was critically acclaimed, helping propel her to superstar status. She has attained twelve Billboard Hot 100 number ones thus far and is the second Bajan artist to win a Grammy Award. She is also a cultural ambassador for Barbados.

Rihanna was born in Saint Michael, Barbados to Ronald Fenty, a warehouse supervisor, and Monica Fenty, an accountant. Her mother, a native of Guyana, is Afro-Guyanese and her father is Bajan and Irish. She is the oldest of three siblings; two younger brothers, Rorrey and Rajad Fenty. She began singing at around the age of seven. Her childhood was deeply affected by her father's addiction to crack cocaine and parent's rocky marriage, which ended when she was fourteen years old. Rihanna attended Charles F. Broome Memorial School, a primary school in Barbados, and then the Combermere School, where she formed a musical trio with two of her classmates at the age of fifteen. In 2004 she won the Miss Combermere Beauty Pageant. She was an army cadet in a sub-military programme that trained with the military of Barbados and Shontelle was her drill sergeant.

At the age of 15, she formed a girl group with two of her classmates. In 2003, friends introduced Rihanna and her two bandmates to record producer Evan Rogers, who was vacationing in Barbados with his wife. The group auditioned for Rogers, who said that "the minute Rihanna walked into the room, it was like the other two girls didn't exist." While auditioning for Rogers, Rihanna sang Destiny's Child's cover of "Emotion". Over the next year, Rihanna and her mom shuttled back and forth to Rogers home in Stamford, Connecticut. Then, shortly after turning 16, she relocated in the United States and moved in with Rogers and his wife. Carl Sturken helped Rihanna record a four-song demo, which included the ballad "The Last Time," a cover of Whitney Houston's hit "For the Love of You" and what would become her first hit, "Pon de Replay" to send to various recording companies. It took a year to record the demos, because she was going to school and would only record during summer and Christmas school breaks. Rihanna's demo made its way to Def Jam, which invited her to audition for the label's then-president, Jay-Z, who quickly signed her.

Rihanna broke into the recording industry in 2005 with the release of her debut album Music of the Sun, which features the number 2 hit single "Pon de Replay". Less than a year later, Rihanna released A Girl Like Me and earned her first number-one single, "SOS, which sampled the popular 80s track "Tainted Love". "Unfaithful" was also released and was fairly successful.

Rihanna released her third album, Good Girl Gone Bad, in June 2007. Prior to the release of the album, she spent the week of the Grammys writing songs for the album with Ne-Yo. She adopted a more sexual image while recording the album, eventually dying her hair black and cutting it short. Rihanna worked with Timbaland and Christopher "Tricky" Stewart, as well as previous musical collaborators such as Stargate, Carl Sturken and Evan Rogers to re-imagine her album compositions with uptempo dance tracks. Rihanna commented, "I want to keep people dancing but still be soulful at the same time. You feel different every album, and [at] this stage I feel like I want to do a lot of uptempo [songs]."

The album topped the charts in countries like the United Kingdom, Canada, Japan, Brazil, Russia and Ireland, and peaked at number two in the United States and Australia. Unlike previous work, the album featured a more dance-pop sound instead of the dancehall, reggae and ballad styles. The album received positive reviews by critics, becoming her most critically acclaimed album at that time compared to her previous efforts.

It yielded eight hit singles - "Umbrella" "Shut Up and Drive", "Don't Stop the Music" "Hate That I Love You" "Rehab" "Disturbia" "Take a Bow" "If I Never See Your Face Again" - all singles reaching the top twenty on the Billboard Hot 100 ? including the worldwide number-one hit "Umbrella," featuring Jay-Z.

In addition to reaching number one in various countries, "Umbrella" was the number one single in the United Kingdom for ten consecutive weeks, making it the longest-running number-one single since Wet Wet Wet's single "Love Is All Around" spent fifteen weeks at the top in 1994. The song is listed number three on the 100 Best Songs of 2007 published by Rolling Stone magazine. In 2008, "Umbrella" earned Rihanna and Jay-Z a Grammy Award for Best Rap/Sung Collaboration in addition to receiving nominations for Record of the Year and Song of the Year. It managed to stay at number one in the United Kingdom for 10 weeks, the longest time spent by a female and in the 21st century, on this chart.

"Umbrella" has also been recognised in various forms of accolades by the music press. The song is listed number three on the 100 Best Songs of 2007, published by the music magazine Rolling Stone. Time magazine also listed the song number three on their Top 10 Songs of 2007. The song is listed number one on Entertainment Weekly magazine's list of the 10 Best Singles of 2007, while topping the magazine's poll for the best single of 2007. Blender magazine awarded the song Song of the Year in their Readers' Poll 2007. The music press has considered "Umbrella" as 2007's Song of the Summer, while The New York Times writer Kelefa Sanneh regarded it as "arguably 2007's signature slow jam".

Rihanna is finishing up recording of her upcoming fourth album, which is slated for a late-Fall release. Play.com has confirmed that the album will be released on November 23, 2009 whereas Amazon.co.uk has said that the album will be released November 16, 2009. She will be in the studio with Tricky, The-Dream, Stargate, Ne-Yo and SRP in the coming weeks.

In August 2009, Rihanna collaborated with Jay-Z and Kanye West on "Run This Town." The song has so far peaked at number three on Billboard Hot 100 and also reached the top ten in five other countries. Rihanna has also been working on her fourth studio album. She appeared on the cover of Vogue Italia for the September 2009 Issue. The shoot was influenced by Rihanna's hair, which she had cut for the shoot into a mohawk-like style. The style of the shoot was Extreme Couture and very dark, and in one shot she appeared semi-nude. Rihanna performed "Run This Town" along with Jay-Z and West for the "Answer the Call" concert at Madison Square Garden in September 2009, making it her first musical performance since the altercation with Brown. The trio also performed "Run This Town," on the premiere of The Jay Leno Show on September 14, 2009.

In November of 2009, "Rated R" was released in the wake of a physical altercation with romantic interest Chris Brown, who pled guilty to felony assault. The album's lead single, "Russian Roulette" -- written with Ne-Yo - was one of the year's most controversial singles.

One year later, Rihanna released her fifth studio album called "Loud'. It's lead single, "Only Girl (In the World)", reached number one in more than ten countries. The song also won a Grammy Award for Best Dance Recording.

"Talk That Talk" was released one year later after "Loud" be released. With the song "We Found Love", Rihanna became the fastest solo artist in the chart's history to achieve twenty Hot 100 top-ten singles, breaking the previous record set by Madonna. The song later became her eleventh number-one single on the Billboard Hot 100. "You Da One" became the second single from the album and was not as successful as "We Found Love". The third single from the album was announced on Rihanna's Twitter. The title track featuring Jay-Z. A music video is rumored to be in the works.

In 2012, the singer will appear in the movie "Battleship", which is based on the game of the same name.

On February 20, 2012, Rihanna and Chris Brown released 2 remixes featuring the other: Birthday Cake & Turn Up The Music

Rihanna's seventh album, Unapologetic was released on November 19, 2012; it was preceded by the lead single Diamonds, which reached number one on the Billboard Hot 100 becoming Rihanna's twelfth number one single on the chart and tying her with Madonna and The Supremes for the fourth-most number ones in the chart's history.

Lift Me Up (From Black Panther: Wakanda Forever) (CDS)

Sex With Me (Dance Remixes)

Bitch Better Have My Money (CDS)