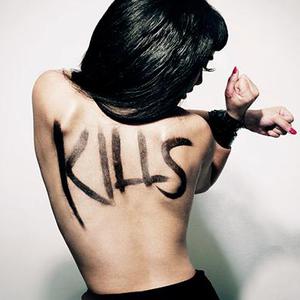 Natalia Keery-Fisher, also known as Natalia Cappuccini (born 15 August 1986), is a British singer-songwriter, actress, and director who performs under the stage name Natalia Kills. She released her debut album, Perfectionist, in 2011. Kills was born in Bradford, West Yorkshire, to an Afro-Jamaican father and Uruguayan mother, where she attended Bradford Girls' Grammar School. In addition, she studied classical drama at the London Academy of Music and Dramatic Art.

Kills was born in Bradford, West Yorkshire, to an Afro-Jamaican father and Uruguayan mother, where she attended Bradford Girls' Grammar School. In addition, she studied classical drama at the London Academy of Music and Dramatic Art. She stated in a post on her blog on social website, MySpace that she grew up flying between London and Florida, where she had relatives, resulting in a mixed American and English accent.

Kills made her acting debut at age 9 in 1995 in New Voices. She had a regular role as Sima on the TV sitcom "All About Me" and also played Amy Franks in the BBC's long-running radio drama "The Archers". She began writing songs at 14, some of which were featured in films and television shows, including "Bring It On 4", "Sleepover", "Just My Luck", and "Entourage". After finishing with "The Archers" in 2003, Kills began pursuing a music career and attributes her musical breakthrough to winning a Radio 1 MC Battle in Leeds under the name "Candy Rapper" in 2003. She signed to the UK record company "Adventures in Music" and released her first single "Don't Play Nice" under the name Verbalicious in February 2005. Kills' told W that her childhood nickname from her mother was "Verbal" because she talked and sang a lot. She adopted the name and variations of it as her stage name at some points during her career.
While writing music for films, Kills posted her self-produced and written demo extended play, "Womannequin" on music social website MySpace in 2007 that attracted the attention of blogger Perez Hilton in 2008, her song received 2 million plays on the website and Kills reached the top of the unsigned artists chart. With offers coming in for concerts and festivals, Kills moved to Los Angeles. In LA, Kills was approached by producers, A&R and labels with contracts. A DJ introduced her to will.i.am after hearing her demo and learning that she did not have a record deal. In January 2008, will.i.am signed her to his record label, "will.i.am Music Group". She did not sign right away as she had reservations about the music industry and will.i.am had to go to London a month later to convince her to record with him. During this time she also co-wrote and appeared on "They Talk Shit About Me" by French recording artist M. Pokora and met underground director Guillaume Doubet, who would go on to direct many of her videos, in Paris.

Kills explained in an interview that she adopted the stage name Natalia Kills at the behest of her record company, which found "Natalia Cappuccini" hard to pronounce. She had taken on her grandmother's family name a few years prior. She explained in an interview that her stage name is based on the phrase "you killed it", and represents her tendency to be a perfectionist. Kills released her debut album "Perfectionist" in April 2011 in Germany following a top ten placing by the first single, "Mirrors". The album was described as a concept album by Kills, proving that perfection is attainable. It features production by Jeff Bhasker and Fernando Garibay, who had worked with Lady Gaga. The album was accompanied by four singles, "Mirrors", "Wonderland", "Free" and "Kill My Boyfriend". The first three singles were minor hits in some European countries but failed to chart in the US or UK. Kills opened for Kelis' European All Hearts Tour, as well as supported Robyn on her Body Talk Tour in November 2010 and early 2011. She also supported Ke$ha on the UK leg of her Get Sleazy Tour. Throughout August and September 2011, Kills supported Katy Perry on her California Dreams Tour for eight dates in Europe and S?o Paulo, Brazil. She also opened for the Black Eyed Peas over the summer of 2011 in Europe.
Kills is featured on a Junior Caldera's single, "Lights Out (Go Crazy)", along with Far East Movement. It was released on March 13, 2012. Kills also features in Tatana's single, "You Can't Get in My Head (If You Can't Get in My Bed)".

On September 5, the singer announced new video entitled "Controversy" to start the promotion of her sophomore studio album entitled "Trouble" that's scheduled for release early 2013 through Cherrytree and Interscope Records. She also revealed the artwork with the official viral video.

Kills called Kate Bush and Alanis Morissette her most important musical influences, highlighting them as emotional artists who wrote honestly about their own experiences. She has also gone on to cite Gwen Stefani as her hero. She also claims that Depeche Mode, Prince, Vanity 6 and Freddie Mercury inspire her live performances.