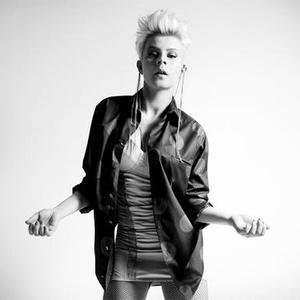 Robyn is the stage name of the Swedish pop singer-songwriter Robin Miriam Carlsson (born 12 June 1979 in Stockholm, Sweden). She is best known for her critically acclaimed electropop music, her impressive live shows and the hits "With Every Heartbeat" (#1 UK) and "Dancing on My Own" (#8 UK, #1 Sweden). In 2011, the single "Dancing On My Own" was nominated at Grammy Awards for the category Best Dance Recording. She is the owner of Konichiwa Records, which release only her music, including Robyn and Body Talk.

Robyn's parents are actors, and she herself was involved in acting at the age of 9, with an extra role in Kronbruden at the Swedish theatre Dramaten. In 1991, at the age of 12, Robyn recorded the theme song named "Du kan alltid bli nummer ett" ("You can always be number one") for the Swedish television show Lilla Sportspegeln. In the same year she performed this song on television show S?ndags?ppet. Robyn was rediscovered by Swedish pop singer Meja in the early 90s. Meja and her band Legacy of Sound visited Robyn's school and were involved with a musical workshop.

Following the completion of her middle school education, Robyn signed to Ricochet Records Sweden, a subsidiary of BMG. She collaborated with producers Max Martin and Denniz Pop. Writing duties were assisted by Ulf Lindstrom and Johan Ekhe, who also helped to produce the album, and they stayed on board with Robyn until 2003.

Robyn started her career in the pop music industry at the age of 16. She signed a record deal with RCA Records in 1994 to release her debut single "You've Got That Somethin'" in Sweden, followed by her breakthrough single "Do You Really Want Me (show respect)". In October 1996 she released her debut album Robyn Is Here. Robyn's US breakthrough came in 1997, when the dance-pop singles "Show Me Love" and "Do You Know (What It Takes)" reached the top 10 on the Billboard Hot 100.

Her second album My Truth was released in May 1999 in Sweden, with subsequent releases elsewhere in Europe. The single "Electric" was a hit across Europe, and propelled My Truth to second position in Sweden. Despite her success in the US market with her debut album, My Truth did not receive an international release.

The decade-long relationship between Robyn and BMG ceased in 2004. When they reacted negatively to "Who's That Girl", which showcased a new electropop sound, Robyn decided to release music on her own. In early 2005, she announced she would be leaving Jive Records to start her own record label, Konichiwa Records. In May 2004, Robyn's Best was released in America. It is essentially a condensed version of her debut album, containing no material from her later releases. In 2006, following her departure from BMG, the compilation Det B&auml;sta Med Robyn (The Best of Robyn) was released in Sweden.

Robyn released the single "Be Mine!" in March 2005, followed a month later by her fourth studio album Robyn. This album became her first number one album upon its release in Sweden. Collaborators of this album include names like Klas ?hlund from Teddybears, the Swedish duo The Knife and former Cheiron producer Alexander Kronlund. Sampling influences from electronic, rap and R&B music, Robyn received rave reviews, and gained the singer three Swedish Grammy Awards in 2006 for "?rets Album" (Best Album), "?rets Komposit?r" (Best Writer, alongside Klas ?hlund) and "?rets Pop Kvinnlig" (Best Pop Female). Robyn released three more singles from the eponymous album: "Who's That Girl", "Handle Me" and "Crash and Burn Girl".

In 2006 she featured on the Basement Jaxx track "Hey you", taken from their album Crazy Itch Radio. The year also marked the release of Christian Falk's second album People Say, on which Robyn contributed the tracks "Dream On" and "C.C.C.". In December 2006, she released The Rakamonie EP in the UK.

In March 2007, Robyn released the single "Konichiwa Bitches" in the UK, followed by the revised edition of the album Robyn in April 2007. This version contains slightly altered versions of two of the original songs and two new tracks: "With Every Heartbeat" (a collaboration with Kleerup) and "Cobrastyle" (a cover of a 2006 single by Swedish rockers Teddybears). The second single from this revised album was "With Every Heartbeat", issued in late July 2007 and reaching number one on the UK singles chart. Follow-up singles "Handle Me", "Be Mine!", "Who's That Girl" and "Dream On" were top thirty hits. Also in 2007, Robyn contributed vocals to Fleshquartet's single "This One's for You", from their album Voices of Eden.

The Rakamonie EP was released in January 2008 in the US under Cherrytree Records, a subsidiary of Interscope, and the US edition of her self-titled album was released in April 2008. "With Every Heartbeat (with Kleerup)", "Handle Me" and "Cobrastyle" were top ten club hits, and the former received airplay at US pop and dance radio stations. She was also featured on "Sexual Eruption (Fyre Department Remix)" by Snoop Dogg.

Robyn completed a short US tour to promote the album Robyn, and was the supporting act for Madonna's Sticky & Sweet Tour at select European dates in 2008. In January 2009, Robyn won a Swedish Grammis Award for Best Live Act 2008. In 2009 she featured on the single "The Girl and the Robot" from the album Junior by Norwegian electronic band R&ouml;yksopp.

In 2010 Robyn announced she planned to release three albums in the same year. To promote the first part, she released the songs "Fembot", "Dancehall Queen" (produced by Diplo) and "None of Dem" (featuring R?yksopp) to digital outlets as promotional singles on 13 April 2010. Klas ?hlund was the main producer of all Body Talk albums.

Robyn released Body Talk Pt. 1, on 14 June 2010 in the Nordic countries through EMI and on 15 June 2010 in the US through Interscope. This mini-album was preceded on 1 June 2010 by the lead single "Dancing on My Own". The song became Robyn's first number one hit in Sweden, and her fourth top ten hit in both the UK and the US, peaking at #8 on the UK Singles Chart and at #3 on Billboard's Hot Dance Club Songs chart. Later The Guardian and Slant Magazine rated "Dancing On My Own" as the best song of 2010, and Pitchfork Media ranked it 4th in their Top 100 Tracks of 2010. On 30 August 2010, Robyn performed at Polar Music Prize 2010 a cover of "Hyperballad", with Bj&ouml;rk being in the audience.

Robyn released on 22 November 2010 (US and Scandinavia) the third and final part of the Body Talk series, entitled Body Talk. The album includes five songs from each previous Body Talk parts, along with five new songs. The new tracks have been made available separately as Body Talk Pt. 3 in the United States and Germany. The album was promoted mainly by the release of the single "Indestructible" on 1 November 2010. Body Talk received extremely favorable reviews from most music critics and featured on many year-end lists.

On 1st April 2011, Robyn issued the single "Call Your Girlfriend".

Who Do You Love (Wolfgang Voigt Gas Remix) (With Kindness) (CDS)

Dancing On My Own (Cassius Remix) (CDS)

Who's That Girl (CDM)