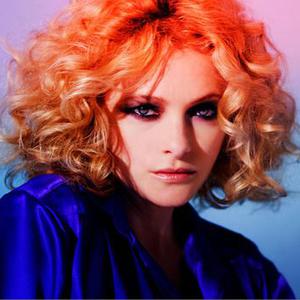 Goldfrapp is an electronic music duo, formed in 1999 in London, England, and made up of Alison Goldfrapp (vocals, songwriter) and Will Gregory (songwriter, producer). Goldfrapp's musical style has changed over time, from a cinematic ambient sound, through electropop, to a glam rock influenced sound, folktronica and 80's synthpop. The majority of the band's songs are composed by Alison Goldfrapp and Will Gregory, although they have collaborated with session musician Nick Batt several times.

The majority of the band's songs are composed by Alison Goldfrapp and Will Gregory, although they have collaborated with session musician Nick Batt several times. They have called their writing sessions a "democratic affair", playing off one another while in the recording studio. While writing, Alison uses her vocals to create melodies and drumbeats. Will composes his music on vintage keyboards, interpreting the mood of Goldfrapp's lyrics.

Alison Goldfrapp was inspired by artists like Serge Gainsbourg, Donna Summer, Kate Bush, T. Rex, Iggy Pop. While traveling through Europe in the early 90s, she also began listening to Polish disco music and cabaret music from the Weimar Republic. Will Gregory's musical background was classical music and has cited Ennio Morricone as his main influence. They also draw inspiration from surrealism, nature and movies (like Cul-de-sac, The Wicker Man and the James Bond franchise).

Alison Goldfrapp began her musical career in the early 90s as a guest vocalist with the electronic band Orbital and trip-hop artist Tricky. In 1999, she was introduced to composer Will Gregory after he had listened to an early version of the song "Human". Gregory felt a connection with Goldfrapp and invited her to record a demo for the film soundtrack he was composing but the demo was never completed. Following several months of phone calls, they decided to form a musical band and began performing under Goldfrapp's last name. In August 1999, Goldfrapp signed a recording contract with London-based record label Mute Records.

In 11 September 2000, Goldfrapp released the critically acclaimed debut album Felt Mountain. The album features Alison Goldfrapp's synthesized vocals in cinematic scope and takes influence from a variety of music styles such as 60s pop, cabaret, folk and electronic (especially ambient). Felt Mountain was a top 75 album in United Kingdom, was certified gold in October 2001 and was shortlisted for the Mercury Prize 2001. Four singles were issued: "Lovely Head", "Utopia" (#131 UK), "Human" (#100 UK) and "Pilots" (#68 UK). The single "Utopia" was re-issued in 2001 on a slightly remixed form as "Utopia (Genetically Enriched)" (#62 UK).

In 28 April 2003, Goldfrapp released their second album, Black Cherry to generally positive reviews. The album represented a change in Goldfrapp's musical style, and featured a blend of glam rock and electropop music. Black Cherry was a top 20 album in United Kingdom, and earned the band a nomination for Best British Dance Act at the 2004 BRIT Awards. They released four singles from this album: "Train" (#23 UK), "Strict Machine" (#25 UK, #54 AUS), "Twist" (#31 UK) and "Black Cherry" (#28 UK).

In 17 October 2006, Goldfrapp released in North America the remix album We Are Glitter. The album features remixes of songs from the Supernature, many of which were previously unavailable in North America.

In 25 February 2008, the band issued the fourth studio album, Seventh Tree. It featured another change in their musical style, and featured a mix of folktronica and trip-hop. Goldfrapp have described the album as a "sensual counterpoint to the glitterball glamour of Supernature". The album received rave reviews and became the band's most critically acclaimed album since their debut album. It was supported by four singles: "A&E" (#10 UK, #85 AUS, #38 BEL, #33 IRL), "Happiness" (#25 UK, #54 AUS), "Caravan Girl" (#54 UK) and "Clowns" (#115 UK).

The Yellow Halo Songfacts states that following electro-pop duo Goldfrapp's departure from EMI, a fourteen-track career-spanning retrospective of their hits to date will be released on February 6, 2012 titled The Singles. The compilation includes two new tracks, "Yellow Halo and "Melancholy Sky. "