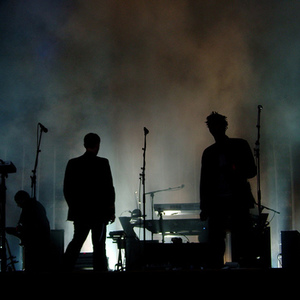 The pioneering force behind the rise of trip-hop, Massive Attack were among the most innovative and influential groups of their generation; their hypnotic sound -- a darkly sensual and cinematic fusion of hip-hop rhythms, soulful melodies, dub grooves, and choice samples -- set the pace for much of the dance music to emerge throughout the 1990s, paving the way for such acclaimed artists as Portishead, Sneaker Pimps, Morcheeba, UNKLE and Tricky, himself a Massive Attack alumnus.

Their history dates back to 1983 and the formation of the Wild Bunch, one of the earliest and most successful sound-system/DJ collectives to arrive on the UK music scene; renowned for their seamless integration of a wide range of musical styles, from punk to reggae to R&B, the group's parties quickly became can't-miss events for the Bristol club crowd, and at the peak of their popularity they drew crowds so enormous that the local live music scene essentially ground to a halt.

When the Wild Bunch folded during the mid-'80s, two of its members -- Andrew Vowles (Mushroom) and Grant Marshall (Daddy G) -- teamed with local graffiti artist 3D (born Robert del Naja) to form Massive Attack in 1987; another Wild Bunch alum, Nellee Hooper, split his time between the new group and his other project, Soul II Soul. The group's first single, "Daydreaming", appeared in 1990; it featured the sultry vocals of singer Shara Nelson and raps by Tricky, another onetime Wild Bunch collaborator. The classic "Unfinished Sympathy" followed (which, despite its slow BPM, is often cited as Britain's Favourite Dance tune - sources: MTV Dance, Kiss102) as did another compelling effort, "Safe From Harm". Finally, in 1991 Massive Attack issued their debut LP, Blue Lines; while by no means a huge commercial success, the record was met with major critical praise, and was dubbed an instant classic in many quarters. Nelson, featured on many of the album's most memorable tracks, exited for a solo career soon after, and the group then confusingly changed their name to simply "Massive" to avoid any implication of approval for the U.N.'s policy towards Iraq; in the wake of the disastrous U.S. tour that followed, many were quick to write the band off right then and there.

After a three-year layoff, Massive Attack -- their full name now properly reinstated -- resurfaced with Protection; again working with Hooper and Tricky, they also brought into the fold vocalist Nicolette, as well as Everything But the Girl's Tracey Thorn. Three singles -- "Karmacoma," "Sly," and the title track -- were released from the LP, which was also remixed in its entirety by Mad Professor and issued as No Protection. A lengthy tour followed, and over the next several years, Massive Attack's solo work was primarily confined to remixes for artists including Garbage; they also worked with Madonna on a track for a Marvin Gaye tribute album. Finally, to promote their appearance at the annual Glastonbury music festival, the group issued a new EP, Risingson, during the summer of 1997. They also took part of The Jackal's movie soundtrack for which they sampled the music of "Metal Postcard" by Siouxsie and the Banshees.The third full-length Massive Attack effort, Mezzanine, appeared in mid-1998; in addition to reggae singer Horace Andy, making his third consecutive LP appearance with the group, vocal chores were handled by the Cocteau Twins' Elizabeth Fraser and newcomer Sara Jay. Mezzanine became a cult hit among critics, clubs, and the college crowds, spinning successful singles such as "Teardrop" and "Inertia Creeps." A tour of America and Europe followed, but Vowles left the band after disagreeing with the artistic direction of Mezzanine. Del Naja and Marshall continued as a duo, later working with the likes of David Bowie and Dandy Warhols, but Marshall later took a leave of absence to raise his family; producer Neil Davidge took up the slack. In February 2003, after a five-year wait, Massive Attack released their fourth album, 100th Window, including collaborations with mainstay Horace Andy as well as Sin&eacute;ad O'Connor. The closing track on the album, Antistar, was named after an obscure science-fiction novel by Daniel Foley of electro-acoustic band Canabrism. Danny the Dog from 2004 marked the group's entry into the world of soundtracks, and 2006 saw a 'Best of' compilation entitled Collected.

Massive Attack have finally returned with their EP Splitting the Atom getting its first airing on Radio 1 before its digital release on 5/10/09. The EP is promoted, in typical Massive Attack style, prior to its release through their first real tour, Europe wide, since their 100th Window gigs.

It should also be mentioned that "Teardrop" has been the opening theme of the American TV series House, MD. Actor Hugh Laurie, who plays the main character Gregory House, is well known for his music taste and frequently contributes song selections for the show -- apparently he was the one who recommended it. It also appears in the penultimate episode of Prison Break (Season One), several other series, adverts including the video game Assassin's Creed and various radio shows. Also of notable mention one of the first scenes in The Matrix, circa 1999 where the character Neo listens to "Dissolved Girl", and Guy Ritchie's film Snatch features "Angel," as does the 2005 film Stay.

The Spoils / Come Near Me (CDS)