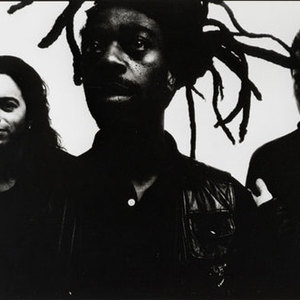 "Eye On The Horizon" reinvents the band with ten tracks that signify the move into fully formed songwriting against a backdrop of dubwise dancabilty. This style helped them to become one of the UK's original dance music pioneers , with a style that has since spawned many sub genres. MCing and reggae vocals partner the mix of live guitars, electronic beats and dub bass to perfection. The album features iconic samples (notably, the legendary theme from Long Good Friday on Gangster, a spoken word piece from Woody Guthrie and Dennis Browns Greensleeves classic Whip Them Jah on American Dread) all of which compliment the bass and beat heavy Dreadzone style perfectly.

The bands influence extends not only out into the current scene as one of the pioneers of dub based music in this country, but rewinding to back in the day as the rhythm section of Mick Jones' Big Audio Dynamite in the 80s . Their roots are embedded in the history of West London sound clash and with a drum and bass partnership of 25 years this year Leo and Greg are still rolling strong and rocking the nation with their distinctive rhythms.

Dreadzone are set to roll like thunder again with a string of live dates already announced in 2010 bringing the music and ingenuity of this unique British group to the people.

The Best Of Dreadzone: The Good The Bad And The Dread

Eye On The Horizon