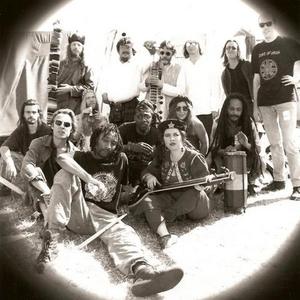 Suns of Arqa is a collective with members in many countries. More than 200 musicians from over 30 countries have been a part of the collective since its inception. Over the years the collective has included seminal musicians and producers such as Adrian Sherwood, John Leckie, Prince Far-I, The Orb, 808 State, A Guy Called Gerald, Kadir Durvesh, Ragunath Seth ... Suns of Arqas mission is to create music that crosses cultural boundaries between the ancient and the modern world.

They were the first to fuse the melodic structure of Indian Raga with the heavy rhythms of Dub Reggae and Electronic Music. As music technology evolved, Suns of Arqa began fusing Traditional Ethnic Instruments with Producers and DJs who explore the cutting edge of digital technology.
SUNS OF ARQA are a seminal force in World Music, a pioneer of the genre now known as World Beat. Founded in 1979 by WADADA in Manchester England, SOA has released over 35 albums on lables such as EMI, VIRGIN, INTERCHILL, ANTLER SUBWAY ... They have performed at major Festivals like the 1st WOMAD Festival, the GLASTONBURY Festival, PHOENIX Festival, TRANS MUSICAL Festival ...
Suns of Arqa have released 35 albums of inspiring music that unites musical styles and cultural heritages. They continue to tour and collaborate with musicians and producers from around the world. Their albums are available through their label ARKA SOUND. Their most recent releases BIG & LIVE and HALLUCINASIA are distributed worldwide by ARABESQUE.

it is worth checking out the work of WADADA, who spent time in jamaica and had many visionary meetings with prince fear-i, and had the vision of melding various cultures of music together, he still tours as WADADA, and was warmly receieved at knockengorroch world ceilidh in summer of 2009 when he also appeared onstage with sitar with THE ORB,

Live (With Prince Far I)