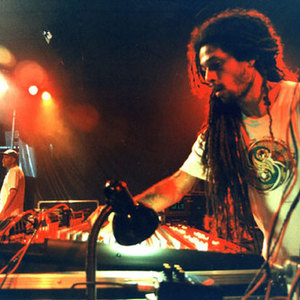 Zion Train are Dub/Dance pioneers and have been undisputed leaders in the genre for more than 15 years. The band are heavily involved in alternative and DIY underground culture and have been since the 90s as well as being purveyors of the finest Roots Reggae music throughout this period. They are one of the finest live dub acts in the world and promoted the practice of dynamic onstage dub mixing which they perform alongside acoustic instruments and the best live vocalists.

Zion Train was founded by Perch (live dub mixing/production), in 1990 and he was later joined by Cod (melodica/production), Tench (production), Molara (voice), Hake (trumpet), and Forkbeard (trombone). Between 2001 and 2005 Dubdadda added extra live vocals and Bigga replaced Forkbeard on trombone in 2001. The live line-up has always been very flexible, varying from Perch and a vocalist for sound-system gigs, to the full lineup for larger events. From 2006 Molara will concentrate on her solo projects and Zion Train live will feature a variety of renowned vocalists including Brother Culture and Kenny Knots alongside Earl 16 and Tippa Irie.

Zion Train have been one of the planet's most prolific groups, along with a mammoth recorded output and innumerable production credits, remixes and song writing collaborations they have produced magazines, CD-ROMs, Internet sites and built sound systems. Their early releases were on their own Universal Egg label, until in 1995 they signed to China Records. They released the world's first promotional dub music video for the 'Get Ready' single and caused a furore with the publicity campaign for their ?Homegrown fantasy' album.

Back on their own Universal Egg label since 1999, they have continued to release quality dub, electronica and world dance music. Their work from the past decade and a half still sounds fresh to today's discerning ears.
Neil@desksmall

Last year saw the reissue of the bands seminal and long unavailable first and second albums; 'A Passage To Indica' and 'Natural Wonders Of The World In Dub' remastered for 2005. 2006 will see the re-release of the third album 'Siren', which was thought by many to herald the birth of the dub-dance vibe that swept the globe in the 1990s.
(text comes from www.ziontrain.co.uk, www.wobblyweb.com

Natural Wonders Of The World In Dub

Original Sounds Of The Zion

Secrets Of The Animal Kingdom

Presents Natural Wonders of the World In Dub