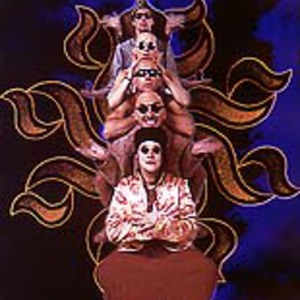 How can one describe a band that mixes middle eastern drum beats, deconstructed dance music, pop culture samples, transcendental remixes, ambient jungle rhythms and more chanting than the monks of Tibet? There are only two words: LOOP GURU. If ever a band embodied the term "Global Villiage," it is Loop Guru. Using a deft combination of old world instruments and vocals with new technology, Loop Guru create a collage of sounds that are somewhat familiar yet still unprecedented.

If ever a band embodied the term "Global Villiage," it is Loop Guru. Using a deft combination of old world instruments and vocals with new technology, Loop Guru create a collage of sounds that are somewhat familiar yet still unprecedented. Like an aural vacation, Loop Guru are more of a guide to a higher consciousness that is part of celebration, part history but 100% fun.

More succinctly, Loop Guru are a protein shake for your head. In the blender are the literary works of William Burroughs, the films of Satyajit Ray, the philosophy of spiritual leader Ram Dass, the music of Brian Eno and the astral landscape of a Phillip 'K. Dick novel.

Called the "Godfathers of global fusion" by Melody Maker, Loop Guru core members, who go under the pseudonyms Salman Gita and Jamuud, have been working together for about twenty years. Their first recorded collaborations were the singles, "Mrbet" in 1992 and "Paradigm Shuffle" in 1993. Both were voted Single of the Week by British weeklies NME and Melody Maker.

Following the release of a third single "Sus-san-tics," Loop Guru recorded their first full length release "Duniya" in 1994. "Duniya" reached #4 on the UK Indie charts and was named to Melody Maker's Top 40 albums of 1994. Loop Guru gained widespread UK and European exposure due to massive radio air-play, as well as amassing a legion of die hard fans due to their highly stimulating live shows.

While Loop Guru's recorded output has garnered rave reviews, the bands live show is equally, if not more, impressive. Having played over 100 dates in the UK alone in 1995, they also played shows in clubs from Tokyo to Switzerland to New York. On a larger scale, Loop Guru have played for enthusiastic crowds at massive outdoor shows like the Glastonbury festival and Peter Gabriel's WOMAD festival at Reading in the United Kingdom.

For the stateside release of Loop Guru's second full-length release entitled "Amrita...all these and the Japanese Soup Warriors", Loop Guru once again reach into their ever-expanding bag of tricks that are sure to open your mind and your soul. Tracks like the techno-dance hybrid "Yayli" and the ambient slow burn "Fumi" are examples of the disparate yet cohesive element that make up Loop Guru's unique sound. According to Jamuud, "There are tunes you can hum but you have no idea what you're humming."

The Fountains Of Paradise