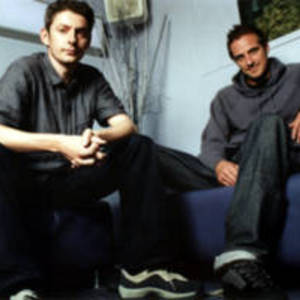 Statik Sound System's first series of releases were met with widespread acclaim. Their 1st long player 'Tempesta', a series of singles and the 'Remix Selection' LP, sent them on a journey playing to ravenous audiences in Italy, Germany, France, Switzerland, Spain and many a club night in the UK. America and Canada then devoured 'Tempesta' with CMJ Music Magazine voting 'Tempesta' and the COT Compilation as their number one new dance album release (Nov, 97).

Statik were featured on endless compilations - E.G Kruder and Dorfmeister's DJ Kicks (recently re-released) and remixed by artists such as Cut La Roc, Mr Scruff, Smith and Mighty, Spring Heel Jack, Aim, More Rockers, J- Raq and Flynn and Flora.
Statik then went into hibernation to build their own studio, reinvent themselves and start their own label. Remote Records is now up and running and the new Statik Sound System album '/My ooh-zik/'was released in October 2001. A follow up of remixes and a single are also ready to drop.
Statik's gourmet morsel's are cooked up by Pete Webb and Giles Butcher who write, produce and mix the tracks. DJ Louie G, who at 22 has already put in a decade on the decks, provides some serious turntable wizardry. Helen White (also of Alpha), Katie Tokus (a nu-blues singer straight from the swamp) and Stepchild (master of the lyrical trickery) provide the vocal delights.

Statik Sound system are returning to work in 2008. They have a new myspace page at www.myspace.com/statiksoundsystembristol We hope to see you there soon, Pete SSS