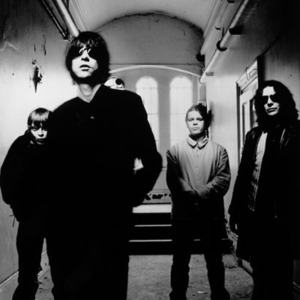 The band is renowned for the frequent change of music style, from indie pop, indie rock, classic rock to alternative rock with electronic influences.

History:
While attending Kings Park Secondary School in Glasgow, Bobby Gillespie met Robert 'Throb' Young and Alan McGee. Gillespie and McGee were heavily influenced by punk rock. In 1978, they joined a local punk band, The Drains, where Andrew Innes was the guitarist. After The Drains disbanded, McGee and Innes relocated to London, while Gillespie chose to remain in Glasgow.

In 1982, Bobby Gillespie and another school friend Jim Beattie recorded "elemental noise tapes", in which Gillespie would bang two dustbin lids together and Beattie played fuzz-guitar. They soon moved on to Velvet Underground and The Byrds cover songs before starting to write their own songs, based on Jah Wobble and Peter Hook basslines. They named themselves Primal Scream, a term used to describe a cry heard in primal therapy. Their first recording session, for McGee's independent label Essential Records, was a single track entitled "The Orchard". Beattie later claimed that they burned the master tape.

After the aborted recording, Gillespie joined The Jesus and Mary Chain as their drummer, and alternated between both bands. Soon Gillespie and Beattie expanded Primal Scream's lineup to include Robert Young on bass, rhythm guitarist Stuart May, drummer Tom McGurk, and tambourine player Martin St. John. This lineup was signed to Creation Records, an independent record label founded by Alan McGee, and recorded the group's debut single, "All Fall Down".

After the release of the single, Gillespie was told by The Jesus and the Mary Chain leaders William and Jim Reid that he was to either dissolve Primal Scream to join the Mary Chain full-time or resign and Gillespie chose to remain with Primal Scream. The B-side "Velocity Girl" of the single "Crystal Crescent", was released on the C86 compilation. The band switched to Alan McGee's Elevation Records.

After some lineup changes, Primal Scream's debut album Sonic Flower Groove was released in September 1987. The album reached number 62 on the British charts and received poor reviews. The backlash from the album caused internal strife within the band and another change in lineup.

The band were first introduced to the acid house scene by McGee in 1988. The band met up with DJ Andrew Weatherall at a rave, and he was given a copy of "I'm Losing More Than I'll Ever Have", a track from Primal Scream album, to remix for one of his shows. Weatherall added a drum loop from an Italian bootleg mix of Edie Brickell & The New Bohemians's "What I Am", a sample of Gillespie singing a line from Robert Johnson's "Terraplane Blues" and the central introductory sample from the Peter Fonda B-movie The Wild Angels. The resulting track, "Loaded", became the band's first major hit, reaching number 16 on the UK Singles Chart. This was followed by another single, "Come Together", which reached number 19.

The band entered the studio with Weatherall, Hugo Nicholson, The Orb, and Jimmy Miller producing, and Martin Duffy now full time on keyboards. They released two more singles, "Higher Than the Sun" and "Don't Fight It, Feel It", both of which were successful. Their third album, Screamadelica, was released in the October 1991 to ecstatic reviews. The album was also a massive commercial success, reaching number 8 on the UK charts. The album won the first Mercury Music Prize, beating Gillespie's former band, The Jesus and Mary Chain.

In March 1994, Primal Scream released their fourth album, Give Out But Don't Give Up to mixed reviews. Whereas some praised the band's new The Rolling Stones-influenced sound, some dismissed the album as tired and drawing too heavily on their influences. The album was preceded by the successful single "Rocks". It was the band's highest charting single to date, reaching number 7 on the UK charts. "Rocks" was followed by the singles "Jailbird" and "(I'm Gonna) Cry Myself Blind".

Primal Scream also supported Depeche Mode on their American tour. After a short hiatus, the band returned with a new lineup. The bassist Gary 'Mani' Mounfield joined Primal Scream after break-up of his previous band, The Stone Roses and Paul Mulreany was added as their new drummer.

In July 1997, Primal Scream released their fifth album, Vanishing Point. It received almost unanimously positive reviews upon release and revitalized the band's commercial viability. The music on the album had a complex shoegazing dance/dub rhythm, harking back to the crossover success of Screamadelica, but sounding significantly darker. Some songs on the album were inspired by 1971 cult film Vanishing Point; Gillespie said that they wanted to create an alternative soundtrack for the film. Three singles supported the album: "Kowalski", "Star" and "Burning Wheel".

Before a short supporting tour scheduled to begin in July, Mulraney left the band and they were forced to use a drum machine. In October 1997, Primal Scream released Echo Dek, a collection of alternative mixes/remixes from Vanishing Point with the bulk of mixes done by Adrian Sherwood. Later that year Kevin Shields (My Bloody Valentine) joined the band on tour, and would have a major influence over their sound in the next few years.

In 31 January 2000, Primal Scream released their sixth studio album, XTRMNTR. The album featured mulitiple guest appearances, including The Chemical Brothers, New Order's Bernard Sumner, and former My Bloody Valentine guitarist Kevin Shields, who had become a semi-permanent member. Three singles supported the album: "Swastika Eyes" (#22 UK), "Kill All Hippies" (#24 UK) and "Accelerator" (#34 UK). The XTRMNTR's political content was well received, with Allmusic calling it a "nasty, fierce realization of an entire world that has... lost the plot". In 2009 NME charted XTRMNTR at #3 in The Top 100 Greatest Albums of the Decade.

Primal Scream returned in 5 June 2006 with their seventh studio album, Riot City Blues. On this album, the band leaves its electronic element behind and returns to more traditional rock. The album features Will Sergeant (Echo & the Bunnymen) on "When the Bomb Drops", Warren Ellis (Nick Cave and the Bad Seeds, Dirty Three) on "Hell's Coming Down" and Alison Mosshart (The Kills) performing backing vocals on "Dolls (Sweet Rock and Roll)". The first single, "Country Girl", became the band's highest charting in their career (#5 in the UK Charts). In 2007 they signed B-Unique Records.

In 21 July 2008, the band released Beautiful Future, their ninth studio album. The album featured a return to alternative rock and it was promoted by the single "Can't Go Back", produced by Bj?rn Yttling (of Peter Bjorn and John) and Paul Epworth. The album features guest appearances from Lovefoxxx (of Cansei de Ser Sexy), Josh Homme (of Queens of the Stone Age) and folk singer Linda Thompson.

After touring seminal album Screamadelica for most of 2011, on 18 October 2011 Mani revealed he had left the band due to the reformation of his original band The Stone Roses. In April 2012 it was announced that Debbie Googe (My Bloody Valentine) replaced Mani as the bass player of the band.

Give Out But Don't Give Up - The Original Memphis Recordings CD2

Give Out But Don't Give Up - The Original Memphis Recordings CD1

Give Out But Don't Give Up- The Original Memphis Recordings CD2

Give Out But Don't Give Up- The Original Memphis Recordings CD1