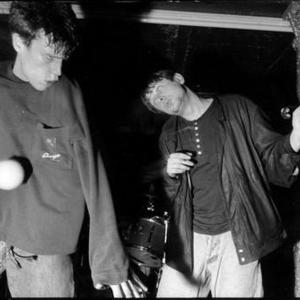 Happy Mondays are an alternative rock band formed in Salford, Greater Manchester, UK in 1985. The band is fronted by Shaun Ryder, who formed the band with his brother Paul Ryder, who played bass. The rest of the band consists of their friend Bez, who danced and played percussion, plus guitarist Mark Day, keyboardist Paul Davis, and drummer Gary Whelan. There are several theories about why the Happy Mondays are called what they are.

One is that the band's name refers to what Manchester's unemployed population called the day that welfare checks were issued, or that simply they didn't have to go back to work on Mondays unlike the poor working sods. However, Shaun Ryder did remark in an interview with drug smuggler Howard Marks that the name Happy Mondays was merely a quick solution to naming the band and bears no real relevance atall. The name has no connection with the song "Blue Monday" by New Order, as the Mondays were together and had named the band before this song was released.

First incarnation
Manchester pop impresario Tony Wilson discovered the Mondays at a battle of the bands contest held at his Hacienda nightclub. The story goes that Wilson signed them to his label, Factory Records, even though they came in last. Their first album, Squirrel and G-Man Twenty Four Hour Party People Plastic Face Carnt Smile (White Out), debuted in 1987. A number of other albums followed, most of which were released in the United States on the Elektra Records label. By the late 1980s, the Happy Mondays were an important part of the madchester music scene and personified rave culture. By this time frontman Ryder was fighting a serious drug problem and the band's productivity plummeted.

Musically, the band fused indie pop guitars with a rhythmic style that owed much to house music, techno and northern soul. Much of their music was remixed by popular DJs, emphasizing the dance influences even further. In terms of style and dress, they crossed hippy fashion and ideals with 1970s glamour. Sartorially and musically, the band helped to encourage the psychedelic revival associated with acid house. One of their most popular songs was Lazyitis, featuring a surreal duet between Ryder and country music legend Karl Denver.
The Mondays disbanded in 1992, and Shaun Ryder and Bez formed Black Grape with ex-Paris Angels guitarist, Paul Wagstaff a.k.a."Wags" and ex-Ruthless Rap Assassins star, Paul Leveridge a.k.a. "Kermit".

Second incarnation
Seven years passed, but in 1999 Happy Mondays reformed, minus Paul Davis and Mark Day. In their place were Wags and a number of other musicians close to Shaun Ryder. However, the reunion with a world tour and the release of a new single, The Boys Are Back In Town, was to be short-lived. The single sunk in the charts, reaching only number 30 in the UK singles chart. It was also dropped from the live set after proving difficult for the band to perform live. In 2000 the band called it a day after providing support for Oasis on their "Standing on the Shoulder of Giants" tour.

The band is featured in the 2002 movie 24 Hour Party People, with Danny Cunningham as Shaun Ryder. Paul Ryder had a cameo role as a gangster and Rowetta (who sang for the band on Pills 'n' Thrills and Bellyaches and Yes, Please!) appeared in the film as herself.

Third incarnation
2004 saw another reformation, comprising Bez, Gary Whelan and Shaun Ryder, following the latter's unsuccessful solo career. The musicians released a live DVD that year of a show in Barcelona, and rumours abounded that the band was recording a new album. The Mondays played a variety of festival dates in 2005 (including Glastonbury), capping it off with a concert at the Manchester Evening News Arena in their hometown.

In June 2006 the Mondays performed another one-off gig in Liverpool, although Paul Ryder was not present - having sworn to never perform with his brother again following the 2000 break-up. On Sunday 30th July 2006 the Mondays were special guests at The Fuji Rock Festival - a 3 day festival held at the Naeba Ski Resort in Japan. They performed a 60 minute set - starting with Loose Fit and ending with 24 Hour Party People. Only Shaun, Bez and Gaz Whelan were present from the original lineup.

In early August of 2006, the band announced that they had completed their first album in 14 years with producers Sunny Levine and Howie B, and have recently signed to Sanctuary Records. A new single, "Playground Superstar" from the soundtrack for the football film "Goal!" was released a few months prior to completion of the new album, titled Uncle Dysfunctional and released in Summer 2007.

Happy Mondays performed before another reformed act, Rage Against the Machine, to put the finishing touches at the venerated 2007 Coachella Music Festival in Indio, California on April 27, 2007. The band then toured medium-sized venues in England in May 2007, playing old and new material. Various festival dates in the UK and New York City were performed throughout Summer 2007.

Shaun Ryder and Bez are currently living in Derbyshire, UK.

The Boys Are Back In Town (CDS)