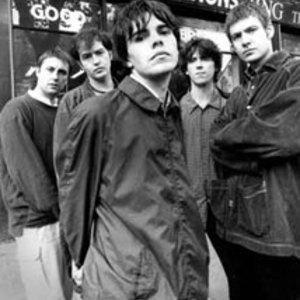 There are two bands with the name The Charlatans. 1. An alternative rock band from the United Kingdom 2. A psychedelic rock band from the United States 1. The Charlatans (known as The Charlatans UK in the U.S. to avoid confusion with the 1960s group of the same name) were originally formed in the West Midlands/Northwich, England in 1988 by bassist Martin Blunt, who recruited fellow West Midlanders; Rob Collins (keyboards), Jon Brookes (drums), John Baker (also known as Day) (guitar) plus vocalist Baz Ketley.

1. The Charlatans (known as The Charlatans UK in the U.S. to avoid confusion with the 1960s group of the same name) were originally formed in the West Midlands/Northwich, England in 1988 by bassist Martin Blunt, who recruited fellow West Midlanders; Rob Collins (keyboards), Jon Brookes (drums), John Baker (also known as Day) (guitar) plus vocalist Baz Ketley.

- Early Days and Initial Success (1990-91) -
Former Electric Crayons singer Tim Burgess (from Northwich) replaced Ketley before the release of The Charlatans debut single "Indian Rope" in 1990 on the band's own Dead Dead Good Records label. It proved an indie hit and the group soon found a major label, Beggars Banquet off-shoot Situation Two, in time for the release of The Only One I Know which reached the Top 10 in the UK singles chart. A further single, Then, and debut album Some Friendly, were released later that year to great commercial and critical acclaim.

- Line-up change / Elusive success (1991-94) -
Baker left the band after the 1991's Over Rising single, to be replaced by Mark Collins (no relation to Rob), who made his debut on another non-album single and video, Me. In Time.

Trying to capitalize on the earlier success of "The Only One I Know" the band brought in maverick producer Flood for their second album Between 10th and 11th. Named after the address of the New York Marquee, site of the group's first U.S. gig, the album failed to hit the top twenty in the UK. In a time where grunge was predominant in the music scene, The Charlatans took a more sophisticated path with this elaborate production and were considered voluntary outsiders from the mainstream of modern grunge rock tendencies of the early 90's. The album included the emblematic Weirdo but as a sign of the times it was poorly-received, both by critics and fans although it has subsequently recovered in recognition and praise.

The follow-up album, Up to Our Hips, which was hailed as a return to form, was a big success and reached number 8 in the UK albums chart.

- Mid-Nineties Resurgence / Death of keyboardist Rob Collins (1995-97) -
In 1995 the band's fourth self-titled album The Charlatans saw them become major UK stars again, topping the UK albums chart and spawning the top 20 single, Just When You're Thinking Things Over. Unfortunately, just as things seemed to be going well for the band, keyboard player Rob Collins was tragically killed in a car crash during the recording of fifth album Tellin' Stories on July 22, 1996. After much soul-searching the band decided to continue and Primal Scream and former Felt keyboardist Martin Duffy was drafted in for The Charlatans high-profile support slot with Oasis at their Knebworth gigs in the summer of 1996, until a permanent replacement for Collins could be found.

Tellin' Stories was released in 1997 featuring contributions from both Rob Collins and Duffy; and in the singles One to Another, North Country Boy and How High the group had their biggest UK hits to date, sounding more like a classic rock act now than ever before.

- New record label / New keyboard player (1998-2004) -
After releasing the career-spanning compilation Melting Pot the band's contract with Beggars Banquet was up, and they signed for Universal with Burgess stating that, although he and the band had enjoyed their time on the independent record label they had made next to no-money in the eight years since their first release. Relations with 'Beggars' remained strong however, and the band helped put together the DVD "Just Lookin' 1990 - 1997" showcasing all their promo videos and a selection of live recordings from that era and B-sides collection Songs from the Other Side, both of which were released in 2002.

Us and Us Only saw the start of a new era for The Charlatans. Their first release for Universal saw new keyboard player Tony Rogers make his Charlatans album debut (he had previously toured in support of "Tellin' Stories" and contributed to b-sides "Keep It to Yourself" and "Clean Up Kid" (from the How High single) and the band took on a slightly country sound, heavily influenced by Burgess's love of Bob Dylan. The soul influenced Wonderland followed in 2001, prooving Tim Burgees to be a very skilled singer into the art of falsetto, before the more 'traditionally Charlatans sounding' Up at the Lake was released in 2004.

- The Sanctuary and Cooking Label (2005-present) -
The band released their ninth full-length album in April 2006, their first for new label Sanctuary Records. Titled Simpatico, the reggae and dub tinged album featured tracks like the fan favourite "NYC (There's No Need to Stop)", and first single Blackened Blue Eyes, that was produced by Jim Lowe. The single charted relatively well at number 28. The album charted in the top 10 in its first week, but soon after dropped out of the charts. Their follow-up to "Simpatico" was the career-spanning singles compilation entitled "Forever: The Singles", which was released on CD and DVD in November 2006.

Taking inspiration from Radiohead who pioneeered the modern concept of musicians making money from touring and merchandising and special versions, rather than the basic recording (to combat the proliferation of illegal downloads primarily but also with an eye on a new paradigm for music distribution), The Charlatans made their follow up album available for download with a minimal "honesty" charge. You Cross My Path was released on 12th May 2008, with a deluxe collectible version available to pre-order for fans, but with the basic album available free of charge. The album was reminiscent of New Order's style, with many of the songs driven by an insistent rhythmic bassline. The trademark Hammond organ patterns were still present and remain a constant.

Their latest (2010) is entitled Who We Touch. The eleventh album for the band, it was released on 6 September 2010 by Cooking Vinyl in a standard and 2-disc version which contains a second CD including early demos and alternative mixes of tracks off the standard album, plus some recordings that didn't make it on to the record. The album peaked at #21 in the UK album charts.

2. The band who originated the name "The Charlatans" were harbingers of the San Francisco underground. Formed in '64 by Mike Wilhelm (lyrics, guitar), George Hunter (autoharp, vocals), Michael Ferguson (Keyboards), Richard Olsen (bass) and Dan Hicks (drums and vocals) they developed a unique sound hybridizing folk, blues, jug band and R&B. Their turn-of-the-century Western image was even more distinctive; with their long hair, hats, watch chains, Victorian suits, and starched, high-collar shirts, they were every inch the saloon dandies, and by 1965 they were a striking and catalytic presence in the Bay area scene.

Despite their influential status, however, their recording career stalled quickly, maybe because they were never able to quite catch a hold on to the musical trends of their time and also being deliberately anachronistic in their appearance. Their haunting version of Buffy Saint-Marie's "Codine" was to have been their debut single for Kama Sutra in early '66. However mindful of the song's controversial subject matter, and much to the band's chagrin, the label opted instead for the tamer "The Shadow Knows". "Codine" did not see an official release until decades later.

Hicks found subsequent success with his band Dan Hicks & His Hot Licks, while Mike Wilhelm went on to play guitar with The Flamin' Groovies.

Who We Touch CD1