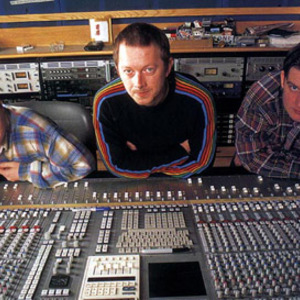 808 State are an electronic music outfit formed in 1988 in Manchester, England taking their name from the Roland TR-808 drum machine. Widely regarded as one of the pioneers of acid house, they were formed by Graham Massey (from ex-factory records band Biting Tongues), Martin Price and Gerald Simpson (later to record as A Guy Called Gerald). They released their debut Newbuild in 1988. Autechre and Aphex Twin have often cited the album as being enormously influential, and the group achieved some degree of chart success in the UK in the early 1990s with releases Pacific State...

They released their debut Newbuild in 1988. Autechre and Aphex Twin have often cited the album as being enormously influential, and the group achieved some degree of chart success in the UK in the early 1990s with releases Pacific State, Cubik and In Yer Face.

They were considered pioneers of the acid house sound, a staple and foundation of rave music. Martin Price, who owned a popular and legendary record store called Eastern Bloc and who founded the independent label Creed, joined up with producer and local musician Graham Massey. They teamed up with Gerald Simpson, who collaborated the effort. At this time, 808 State recorded the debut EP Newbuild, in 1988.

MC Tunes (real name Nicky Lockett) was a Manchester rapper, who worked with the band on the 1990 album, The North At Its Heights. The album was a moderate success, reaching #26 in the UK charts, and also saw European and Japanese release. It spawned three UK singles, The Only Rhyme That Bites (UK #10), Tunes Split The Atom (UK #18) and Primary Rhyming (UK #67). Tunes later returned in 1996 to work with on a new track, Pump, taken from their album Thermo Kings. It was due to be released as a single, but this never happened.

Simpson left the group in 1989 to form his own solo project, A Guy called Gerald; his biggest hit was Voodoo Ray. At this point, the remaining personnel enlisted Andrew Barker and Darren Partington (known as the Spinmasters) to record an EP called Quadrastate in 1989. A very popular hit on the club floors came forth from this effort, entitled Pacific. Their next album, Ninety, was well-received by the ever-growing rave culture at that time. There were other singles released, some of which ended up on the 1991 album Ex:El, which featured vocals from Bernard Sumner (New Order) and ex-Sugarcubes vocalist Bj&ouml;rk. It is said that people crawled through the air shafts of the Hacienda to see them.

In 1992, Price left the group to do solo producing, eventually forming his own label, Sun Text. The remaining members released a fourth album called Gorgeous, and after that, did some remix work for David Bowie, Soundgarden, and other performers, before returning with the album entitled Don Solaris in 1996. They released a greatest-hits compilation named 808:88-98 in 1998. The band is still active, touring and performing DJ sets, and releasing albums and singles to the dance and rave scene.

In September 2011, ZTT released the compilation, Blueprint, featuring some re-recordings of several of their best songs.

The Best Of 808 State: Blueprint