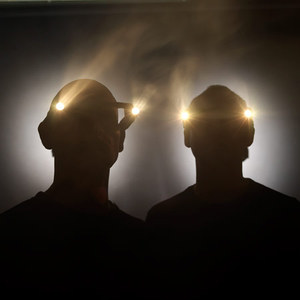 Orbital are an electronic music duo consisting of brothers Phil Hartnoll and Paul Hartnoll formed in Sevenoaks, Kent, England whose career originally lasted from 1989 until 2004. Orbital reformed in 2009 with the original lineup of Phil Hartnoll and Paul Hartnoll. Orbital took their name from Greater London's orbital motorway, the M25, which was central to the early rave scene and party network in the South East during the early days of acid house.

Orbital reformed in 2009 with the original lineup of Phil Hartnoll and Paul Hartnoll.

Orbital took their name from Greater London's orbital motorway, the M25, which was central to the early rave scene and party network in the South East during the early days of acid house. One of the biggest names in British electronica during the 1990s, Orbital were both critically and commercially successful, being particularly known for an element of live improvisation during their shows, a rarity with techno acts. They were initially influenced by early electro and punk rock.

In 1989, Orbital recorded a track called "Chime" on their father's cassette deck. It was released on Oh Zone Records in December 1989, and re-released on FFRR a few months later. The track became a rave anthem, reaching number 17 in the UK charts, and earning them an appearance on Top of the Pops, during which they wore anti-Poll Tax t-shirts. A few singles and EPs followed, and their first self-titled album, a collection of tracks recorded at various times, was released in late 1991.

In late 1992, the "Radiccio" EP barely reached the UK top 40, but it included probably their most well-known song, "Halcyon". The song featured a backwards sample of Kirsty Hawkshaw from Opus III's "It's a Fine Day", and B-side "The Naked and the Dead" was similarly based on a line from Scott Walker's rendition of Jacques Brel's song "Next". Halcyon was dedicated to the Hartnolls' mother, who was addicted to the tranquiliser Halcion for many years.

The duo's popularity grew rapidly with the release of their second album, titled "Orbital 2" in 1993. The album featured complex arrangements and textures, and opens with the two minute track "Time Becomes", which comprises nothing more than 2 slightly detuned, looped samples of a Michael Dorn line from Star Trek: The Next Generation, "...where time becomes a loop" being played simultaneously through the left and right channels, respectively (until 1 cycle of phase difference has happened). This very same sample was used at the beginning of "The Mobius", the opening track in the previous album. This audible pun was intended to make listeners believe that they had bought a mis-pressed album (Orbital 1 packaged in Orbital 2). The album reached #28 on the UK album charts, staying in the top chart for fifteen weeks. Halcyon was remixed for the album, as "Halcyon + On + On". The version played live has also gained notoriety amongst fans for containing a complete mashup of diverse samples including "You Give Love a Bad Name" by the band "Bon Jovi", "Heaven Is a Place On Earth" by Belinda Carlisle, and most recently "I Believe in a Thing Called Love" by the band "The Darkness". The first two albums are commonly known as the "Green Album" and the "Brown Album", after the colour of their covers.

Orbital won a NME award for "Vibes Best Dance Act" early in 1994, but it was their headline appearance at the Glastonbury Festival on 25 June 1994 that brought them most attention. Q magazine classed it as one of the top 50 gigs of all time, and in 2002 included Orbital in their list of "50 Bands to See Before You Die". Orbital gave an improvisational element to live electronic music as the brothers mixed and sequenced their tracks on the fly, wearing their trademark head-mounted torches behind banks of equipment. Orbital were one of the few electronic acts invited to play at Woodstock '94.

The third album "Snivilisation" was released in August 1994. Alison Goldfrapp provided vocals on a couple of the tracks, including the single "Are We Here?". This track also included a sample from "Man At C&A" by "The Specials". Among the remixes of Are We Here? was "Criminal Justice Bill?" - four minutes of silence, a reference to the Criminal Justice and Public Order Act 1994, which was in part intended to clamp down on the rave scene which had given birth to Orbital. The other track with Goldfrapp vocals, "Sad But True", was remixed for the "Times Fly" EP, the band's only release in 1995.

The single "The Box" was released in April 1996, reaching #11 in the UK, and its parent album "In Sides", released in May 1996, became their second top five album. It revealed a less obviously dance-oriented sound than previously, and had more in common with soundtrack music. In Sides has since come to be considered one of their most critically well-regarded works. As with the previous album, there was a vague theme of ecological disaster and dissatisfaction with society. The following year, the duo contributed to film soundtracks (The Saint & Event Horizon) and enjoyed the biggest singles of their career, with a live version of Satan and their reworking of the aforementioned "The Saint" theme both reaching #3 in the UK.

1998 saw a return to the studio to work on their fifth album "The Middle of Nowhere". This was released in 1999, becoming their third top five album, and was a return to a more upbeat style, with Alison Goldfrapp returning on vocals, and included the single "Style" featuring the stylophone. In 2000 the single Beached was released from the soundtrack to the film "The Beach", mixing the brothers' musical style with a melody by Angelo Badalamenti and the words of Leonardo DiCaprio from the film.

2001's "The Altogether" featured guest vocals by the Hartnolls' brother-in-law David Gray, a sampled Ian Dury, and a version of the "Doctor Who" theme, entitled "Doctor ?". It was to be their last album for FFRR, and had a mixed critical reception. The following year, "Work 1989-2002" collected various singles from Chime onwards.

Orbital split up in 2004. They played a final series of gigs from June through July 2004 at the "Glastonbury Festival", the "T in the Park" Festival in Scotland, the "Oxegen" festival (formerly known as "Witness") in Ireland, and the "Wire Festival" in Japan, concluding with a live "Peel Session" gig at Maida Vale Studios in London on 28 July 2004. The release of their seventh and last original album, the "Blue Album" (which, unlike the untitled previous green and brown albums, was actually named the "Blue Album"), coincided with this final wave of shows. The album featured "Sparks" (on "Acid Pants") and Lisa Gerrard (on the final single "One Perfect Sunrise").

Paul Hartnoll continues to record music under his own name, including tracks for the new "Wipeout Pure" game for the PSP. He released his first full length solo album, entitled "The Ideal Condition" on the ACP record label in June 2007. Phil Hartnoll formed a new electronica duo, "Long Range", with Nick Smith. Their debut album, "Madness and Me", was released on their own label, Long Range Recordings, on August 6.

In 2008 as "Long Range", they signed to commercial management company Angel Artists who additionally represent the likes of Dave Ball (of "Soft Cell"), "The Grid", Paul Dakeyne & "Icehouse Project". He lives in Brighton with his three sons, Louis, Milo and Conrad.

Orbital released a 2 CD/DVD compilation "Orbital: Live at Glastonbury 1994-2004" on 11 June 2007. The collection contains over 2 hours of music recorded from the group's performances at the festival over the course of a decade of appearances there.

Orbital sometimes incorporated political and environmental commentary into their music. The track "Forever" on Snivilisation samples a speech by Graham Crowden from the 1982 Lindsay Anderson film Britannia Hospital, in which he lambasts humankind for its destructive ways; and the track "You Lot" on the Blue Album, features a confrontational, partially vocoded anti-genetic engineering sample from Christopher Eccleston, originally from the TV two-part series The Second Coming written by Russell T Davies.

They recorded "The Girl With the Sun in Her Head" from "In Sides" using Greenpeace's mobile solar power generator CYRUS. They named an early record "Belfast" after playing live in the city of Belfast at the height of The Troubles in 1990. Other album track titles suggest environmental concern such as "Kein Trink Wasser" ("no drinking water" in German) from Snivilisaton and "D?r Budr" ("dirty water" in Welsh) and "P.E.T.R.O.L." from "In Sides".

Although Orbital has done many live shows, Phil Hartnoll said in an interview, that he only learned to DJ in the last few years. LRR is the music label of Phil Hartnoll (Orbital) and Nick Smith and home to the band, Long Range. www.longrange.tv and www.myspace.com/longrangemusic

Pioneer of British electronic music returns Orbital (aka Phil and Paul Hartnoll) were, for almost two decades, one of the most creative and influential electronic acts on the planet, recording their seventh and last studio album in 2004. Not content to rest on the laurels of past glory, Phil Hartnoll's new creative project is Long Range, formed in conjunction with Nick Smith, an artist whose recording career for dance labels Dragonfly and Atomic Records has led to major film credits with Ridley Scott. Long Range's sound harks back to the ambient genius that was Orbital whilst transporting the listener into a more acoustic, atmospheric and cinematic realm. From blissed out moments to jarred and broken beats, their eponymous album references a spectrum of genres and refuses to be pigeonholed.

Where Is It Going (EP)