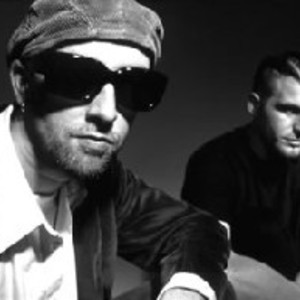 Meat Beat Manifesto, often shortened to Meat Beat or MBM, is an electronic music outfit originally consisting of Jack Dangers and Jonny Stephens formed in 1987 in Swindon, United Kingdom.. This was also the hometown of the band XTC, who helped Meat Beat get started. Meat Beat Manifesto are considered a 'best-kept secret' in the world of dance music, providing (sometimes unwittingly) the musical starting blocks for young samplists in the know (most notably The Prodigy...

Dangers and Stephens left Perennial Divide in 1988 to record an album, but the tapes were burnt in a studio fire. They then recorded the EP Storm the studio, which found them pigeonholed as an industrial act. In response, they recorded 99% in 1990 which was more techno-influenced. Later that year, they released Armed Audio Warfare, which was an effort to re-record the burned tapes of the would-be debut album.

The band's live show was conceived as an intense audio-visual experience, with dancers, led by choreographer Marcus Adams, in costumes designed by artist Craig Morrison and video clips accompanying live instruments, sequenced electronic instruments, and live DJing. In the United States, they opened for Nine Inch Nails on their debut national tour in 1990. Adams appeared in many of the band's promo photos with his trademark "popcorn" hairstyle (mostly shaved, with scattered tufts of braided hair) until Satyricon in 1992.

In 1992, the band released Satyricon which continued to show Meat Beat as more of an electronica band. In 1994 Dangers relocated from England to San Francisco, resulting in Stephens' departure from the band. Dangers continued the band as a solo-plus-collaborators form, releasing Subliminal Sandwich in 1996. While this album represented MBM's major-label debut on Trent Reznor's Nothing records, it failed to reach the critical and commercial successes of previous releases.

In 1997 Dangers recruited drummer Lynn Farmer and guitarist Jon Wilson to record and release Actual Sounds and Voices in 1998, which found the group's earlier flirtations with jazz fusion featured more prominently; the record included appearances by saxophonist Bennie Maupin. The album yielded the single Prime Audio Soup which was featured in the film The Matrix.

In 2002 MBM released RUOK?, which demonstrated great steps in the evolution of their sound and prominently featured Dangers' newly acquired EMS Synthi 100. In 2003 they released a remix album for Storm The Studio, followed by ... In Dub, a remix album of RUOK?.

At the Center was released in May 29, 2005. A part of independent label Thirsty Ear's Blue Series, the album is a collaboration between Jack Dangers and jazz musicians Peter Gordon, Dave King, and Craig Taborn. It has been well-received by many critics, with one reviewer calling it "one of the best albums of the year in any genre." An EP titled Off-Centre, consisting of outtakes, a remix, and a live track, was released several months later, as well as a limited edition live album recorded during the extensive touring for At the Center. Later, in 2006, Dangers put out a DVD featuring a live MBM show at the Metro in Chicago.

Meat Beat Manifesto's 9th studio album, Autoimmune, was released on April 8th, 2008. Originally slated to be a double disc, twenty song affair, it was pared down to a single disc with fourteen tracks upon release. It features the first lyrical work from Dangers since his limited vocal appearances on 1998's Actual Sounds & Voices. In addition, Azeem and DJ Z-Trip make guest appearances. A remix EP was released on iTunes prior to the album's street date, and at least one B-side has been put up for free download on the official MBM website.

AlbumAnswers Come in Dreams was released in 2010 by Metropolis label. This time Dangers use deep dubstep bass and dark ambient sounds.