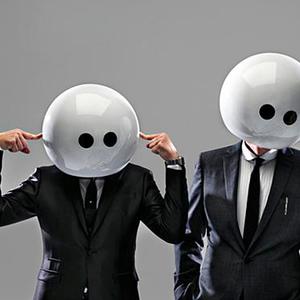 Underworld are a British electronic group formed in 1986 in Romford, Essex, England, by Karl Hyde (vocals, guitar, production) and Rick Smith (keyboards, production), assisted by Darren Price (keyboards, production) when playing live. They are best known for their unique mix of techno, trance, dance, ambient and sometimes drum and bass, the vocal parts performed by Hyde as spoken-word streams of consciousness, and for their outstanding live shows. The band gained worldwide fame with Born Slippy .NUXX from Trainspotting soundtrack.

Before Underworld, Hyde and Smith started out in 1979 on The Screen Gemz band while working together in a diner in the city of Cardiff, where both had been studying. In 1983 they recorded two albums for CBS Records with a proto-electroclash new romantic band whose name was a graphic squiggle, later entitled Freur.

In 1986 Hyde and Smith formed Underworld, after disbanding of Freur. They tried a more guitar-oriented funky electropop sound on their two albums released on Sire Records: Underneath the Radar (1987) and Change the Weather (1989). This initial lineup (also called Underworld Mk1) consisted of Karl Hyde, Rick Smith, Alfie Thomas, Bryn Burrows, Baz Allen and Pascal Consoli before sinking back into obscurity and disbanding in 1990.

British DJ Darren Emerson hooked up with Hyde and Smith in 1992 and helped them refine their sound into something more sleek and beat-oriented, yet still shot through with tinges of blues, rock and spoken-word streams of consciousness. After several releases on Junior Boy's Own as Lemon Interupt, the trio re-adopted the Underworld name in 1992. Two songs from this era are Rez and Spikee.

In addition to their music, Hyde and Smith are members of Tomato, a graphic design company which has done high-profile work for clients around the world as well as art for all of Underworld's releases. Hyde, along with former Freur keyboardist John Warwicker, has also published two typographic journals, Mmm... Skyscraper, I Love You (1994) and In The Belly Of Saint Paul (2003).

Their first full-length, Dubnobasswithmyheadman, was released in 1994 to rave reviews and is still considered a landmark. It spawned several hit singles (Dark & Long, Cowgirl, Dirty Epic) and was followed a couple years later by the Born Slippy single.

The sophomore album Second Toughest in the Infants was released in 1996. This album showed Underworld maturing as a trio, mixing elements of techno, house, drum and bass and pop music to spectacular effect. The first track Juanita/Kiteless/To Dream of Love (three parts) is one of the longest songs recorded by Underworld, with a length of over 16 minutes.

In the same year they issued an EP Pearl's Girl, containing various mixes of the song Pearl's Girl and five new tracks (one of them is Cherry Pie, an early version of Rowla). Underworld's much-praised remixography also grew, including Bj&ouml;rk, Saint Etienne, Simply Red, Massive Attack and Leftfield.

After licensing out a remix of Born Slippy (entitled Born Slippy .NUXX) for the 1996 cult classic film Trainspotting, Underworld gained instant worldwide fame and found themselves touring the world. Their fame continued to run high into the release of Beaucoup Fish in 1999. Five singles were released: Moaner, Push Upstairs, Jumbo, King of Snake, and Bruce Lee.

Underworld issued a live set and a DVD named Everything, Everything in 2000, after which Emerson left the group to concentrate more on his DJ career. The mellower album A Hundred Days Off followed in 2002. It was promoted by two singles: Two Months Off and Dinosaur Adventure 3D.

In 2003 Underworld released a 2 CD compilation entitled 1992-2002, comprising some of their best songs. Also since 2003 the group has been trickling out new music on their official website www.underworldlive.com via a series of downloadable mp3s dubbed "The Riverrun Project". Each mp3 bundle features 25-or-so-minute of mixed new material, hundreds of photographs and traditional album art.

In 2005 the band issued another live album, Live in Tokyo 25th November 2005, a recording of Underworld's live performance at the Electraglide festival in Tokyo on 25 November 2005. There were apparently only 7000 copies of the album made.

Oblivion With Bells, their fifth studio album was released in October 2007, the first in collaboration with Darren Price who joined the band in 2005. It spawned four singles: Crocodile, Boy, Boy, Boy, Beautiful Burnout, and Ring Road.

On 13 May 2010, Underworld released a new single Scribble (radio edit), available for free download on their official site. This single was followed by a new album later that year, called Barking, which is still in the process of releasing singles, beginning with the aforementioned Scribble, Always Loved a Film and finally Diamond Jigsaw. Also released on a beatport remix contest was Bird 1 where amateur producers were able to put their take on Underworld's collaboration with Dubfire. As of 2011, the duo can also attach to their resumes soundtracking a live stage play. Frankenstein, produced and directed by Danny Boyle, starring both Johnny Lee Miller & Benedict Cumberbatch who are, on alternating nights, both Frankenstein, or the Creature. The Soundtrack is available through Underworld's Website.

Drift Series 1 (Underworld And The Necks)