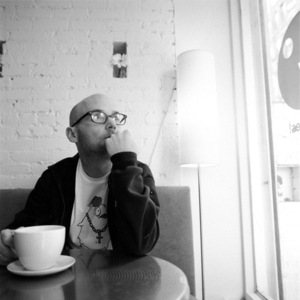 Moby is an American electronic musician and is also the name of his live band. Born Richard Melville Hall on September 11, 1965 in Harlem, New York. Moved to Darien, Connecticut at the age of two. He has also released music under the names Voodoo Child, Barracuda, U.H.F., The Brotherhood, DJ Cake, Lopez, On the Rim of the Wheel a Nail, and Brainstorm/Mindstorm. Moby plays keyboards, guitar and bass guitar. He took his performing name from the novel Moby-Dick by Herman Melville, who is his great-great-granduncle.

He has also released music under the names Voodoo Child, Barracuda, U.H.F., The Brotherhood, DJ Cake, Lopez, On the Rim of the Wheel a Nail, and Brainstorm/Mindstorm.

Moby plays keyboards, guitar and bass guitar. He took his performing name from the novel Moby-Dick by Herman Melville, who is his great-great-granduncle.

Moby used to be in a punk band called the Vatican Commandos, which was formed in 1980, but abandoned punk in 1989 for electronic music. He realized his music tastes and growth were going in a different direction than his previous band's.

His first album "The Story So Far (aka Moby)" featured the single "Go", which gained popularity in many discos, and earned a spot on the UK charts. The song is so popular that Moby still plays "Go" regularly in his sets. "Go" is a progressive track using the string line from "Laura Palmer's Theme" from the TV drama Twin Peaks.

His first album for the UK based MUTE Records was Everything Is Wrong (which had US distribution via Elektra) , which earned early critical praise and minor commercial success. He followed that up with a hard rock/electronic album called Animal Rights in 1996. In 1997, he released I Like to Score, a collection of music included in movies. Among those tracks was an updated version of the James Bond theme used for the James Bond film Tomorrow Never Dies. However, both Animal Rights and I Like to Score had only limited success and Moby and Elektra parted company however he remained signed to MUTE.

After a decade's worth of music, Moby's breakthrough album was 1999's Play. Mainstream reviewers raved about his talents on the album (released on V2 Records) though some early fans were let down. The album has 18 tracks and was the first album in history to have all of its tracks commercially licensed: "Porcelain," for instance, appeared on TV commercials for Bailey's Irish Cream, Hong Kong's PCCW and Nordstrom, and Volkswagen's MKIV Jetta; "Find My Baby" was on a commercial for American Express featuring golfer Tiger Woods. The album's tracks eventually were accepted in various radio formats, but because of Play's extensive licensing, the album could have been financially successful even without radio play. In addition to fame garnered through its licensing, Play is also notable for its extensive sampling of old blues recordings collected by Alan Lomax. In a 2005 posting on his web site, Moby theorized that his eagerness to license his music is a result of "growing up in poverty."

In 2001, Moby founded the Area:One Festival. It was a popular touring rock festival that featured an eclectic range of musical genres. A second tour was organized for the following year.

In 2001 Moby also earned the ire of Eminem after calling his music misogynistic and homophobic; Eminem later satirized Moby (among others) in "Without Me," calling him a "fag" and questioning his relevance with the claim "Nobody listens to techno." Moby replied that he hadn't played techno since 1992. The two were in a confrontation at the 2002 MTV Video Music Awards, though Moby expresses respect for Eminem as an artist.

In 2002, Moby briefly had a television show on MTV, Se?or Moby's House of Music, which focused mostly on more obscure electronic music. Also in 2002, Moby released 18, an album that had 18 tracks. The most popular song on the album was "We Are All Made of Stars". Moby says he wrote "We Are All Made of Stars" because of the September 11th Terrorist Attacks, which happened on his birthday.

In 2005 Moby released "Lift Me Up", a single from his album Hotel, which featured, in addition to numerous remixes, UK company Digimpro's software. The program allows users to remix the song - using any or all of the samples included?and save it as an MP3 file. Thus unlimited, personalized versions of the title track were possible. Digimpro had previously seen exposure with group Erasure's single "Breathe," allowing users the same ability. Instead of his usual usage of samples, all of the vocals and instruments on "Hotel" were performed live in the studio by Moby and vocalist Laura Dawn, who is the Cultural Director of MoveOn.org.

For certain dates on Moby's 2005 European tour, Liveherenow provided concert goers with CDs of the show 10 minutes after the show finished. Other Mute Records artists like Erasure and Client have previously used this company for similar reasons.

Moby has recently scored the soundtrack for Richard Kelly's upcoming movie 'The Southland Tales'. Whilst he is generally against composing music for films, he was a huge fan of Kelly's previous film 'Donnie Darko' and could not resist the offer the director gave him.

ITV in the United Kingdom use Moby's song "Lift Me Up" for their coverage of Formula One racing by using the song as the intro. and also snippets to segues for interviews and advertisements.

Also, Moby had one of his older songs used in a Original HBO series, The Sopranos. This song, "When its Cold I'd like to Die" was used in the last scene in which Tony was in his dream state.

Moby is a vegan, non-denominational Christian and self-proclaimed "simpleton" (for his often sincere and idealistic political assessments).
Moby lives in New York City. Until recently he co-owned a small restaurant and coffee shop called TeaNY, where he occasionally waited tables. He also organized the Little Idiot Collective, a group of artists that also includes cartoonist and musician James Kochalka. He's a huge fan of the TV series "The Simpsons".

Moby is a well known advocate for a variety of progressive causes, working with MoveOn.org, and PETA, among others. He created MoveOn Voter Fund's "Bush in 30 Seconds" contest along with singer Laura Dawn and MoveOn Executive Director Eli Pariser.

He also actively engages in nonpartisan activism. He has performed benefit concerts for the Institute for Music and Neurologic Function, promoting music therapy. Moby also serves on the Board of Directors of Amend.org, a nonprofit that implements injury prevention programs in Africa.

He is an advocate of network neutrality and he testified before the US House committee debating the issue in 2006.

This Is Not Our World (Ce N'est Pas Notre Monde) (Feat. Indochine) (CDS)

My Only Love (Lunar Plane Remix)

Everything Was Beautiful, And Nothing Hurt (The Eastwest Sessions)

Everything Was Beautiful, And Nothing Hurt (Remixes)