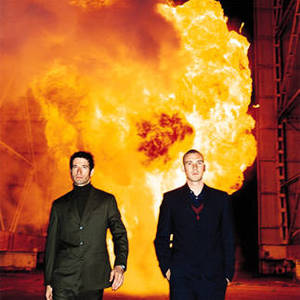 Propellerheads is a British big beat music band from Bath made up of electronic producers Will White and Alex Gifford. The term "Propellerhead" is californian slang for a computer nerd, and when Gifford and White heard a friend from California drop this into conversation, they thought it the perfect name for their band. Their first release was an EP named Dive!, published in 1996 through independent label wall of sound.

Their first release was an EP named Dive!, published in 1996 through independent label wall of sound. They gained fame the next year by providing a remix for Bond composer David Arnold's Bond tribute album Shaken & Stirred covering John Barry's On Her Majesty's Secret Service, the theme song to the sixth James Bond film, re-orchestrated by Arnold. The single "History Repeating" followed, a collaboration with jazz diva Shirley Bassey, fusing big beat with jazz.

Their only album to date is Decksandrumsandrockandroll, released in 1998 by Wall of Sound in the UK and Europe and DreamWorks in the US and Japan. The Dreamworks versions include collaborations with hip hop veterans De La Soul and Jungle Brothers, and the Japanese version is a sought-after 2 Disc Special Edition including some of their earlier singles. A track from the album, "Spybreak!", became widely known after its use in the famous lobby scene in The Matrix.

After touring for their hit album, Will White fell ill. They released Extended Play EP in 1998, and in the song "Props' Vote Of Gratitude", Alex Gifford raps for the first time, explaining to the attentive listener that the band would "be back after this short break". Things subsequently went quiet in the Propellerheads camp. Alex moved to New York and produced the Jungle Brothers 1999 Album V.I.P. In which he raps alongside The Black Eyed Peas among others and Will White provides the drums for the eponymous track. He has also produced a track for Rufus Wainwright ("Shadows") on his 2001 album Poses. White has since released a mix compilation for the Beatz and Bobz series, and he has also appeared as a member of the De-Fex music project.

In October 2003 Wall of Sound commemorated its 10th birthday, and to celebrate, released a two disc album charting 10 years of its pioneering British music. The first CD featured alumni such as R?yksopp, The Wiseguys and Mekon, while Gifford provided a mix CD for the second disc. Surprisingly the first track on that disc was a new song by Propellerheads featuring British rapper Livingroom Johnston, entitled "10 Years", a cool, laid back funky tune with a catchy riff, that might give an indication about the Propellerheads' forthcoming album.

Gifford and White have reportedly been close to finishing "that difficult second album" for a while now, but have scrapped material they did not believe was fresh or new enough to warrant release. Their next album will apparently feature duets from Rufus Wainwright and k.d. lang among others, but WoS has no projected release date.

Their song "Take California" was the first song ever to be used in an Apple iPod television ad.

On Her Majesty's Secret Service (CDS)