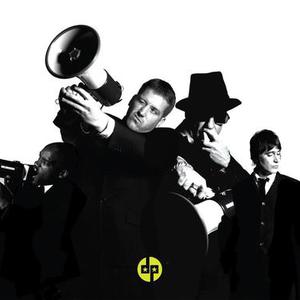 From their early singles for Concrete Records to their genre defying ?Six Million Ways To Live' lp, the Dub Pistols have always added a much needed Rock n Roll swagger to the UK's dance scene. Chewing up hip-hop, dub, techno, ska & punk & spitting them out in a renegade futuristic skank they have consistently defied genres & exceeded the highest of expectations. Their genre-mashing abilities have led to remix work for the likes of Moby, Crystal Method, Limp Bizkit, Bono, Korn & Ian Brown, and seen them work with hiphop legend Busta Rhymes on ?One'...

Their genre-mashing abilities have led to remix work for the likes of Moby, Crystal Method, Limp Bizkit, Bono, Korn & Ian Brown, and seen them work with hiphop legend Busta Rhymes on ?One', a track for Blade 2 & ?Molotov' on the Y Tu Mama Tambien soundtrack.

Front man Barry Ashworth is also known for his full-throttle peak-time DJ sets across Australia, Singapore, Serbia, Dubai, Thailand, Germany, Croatia, Italy and France, to name but a few. Whilst 2010 is yet another busy year for Barry; licensing deals with Playstation Singstar & Hollywood Movies Parenthood & Piranha 3D, remixes in the making for Atomic Hooligan, DJ Love & Myagi, and his co-owned label Westway making bigger waves than ever. There is just no letting up for this much-loved party starter.

Barry Ashworth and his motley crew created their latest long-player in between gigs every weekend following the release of acclaimed 2009 album ?Rum & Coke'. ?Worshipping The Dollar' sees a return to lyrical themes explored on earlier albums with deeper and more conscious lyrics and a pacier feel to the tracks, which mirrors their increasingly frenetic live shows.

?There are a lot more statement songs - a lot of food for thought on this one,? says main man Barry Ashworth. ?It's more uptempo, there's some DNB, but the lyrics are deeper and darker. It's more like our old stuff in a way.?

The title of the album is taken from a track voiced by Akala, Ms Dynamite's brother. ?Living in squalor, worshipping the dollar, there is no flag large enough to wrap around the horror? ? so runs a key lyric on the anti-war song ?West End Story', a scathing indictment of US imperialism.

From their early beginnings as a soundsystem project, Dub Pistols have grown into a party-rocking live band that ignites festivals and venues. Their infectious blend of ska, dub, hip-hop, electronic music and punk has won them many fans around the globe over the past 15 years and, following sold-out shows across Europe, they were justifiably voted the Best Live Act at DJ Mag's Best Of British Awards at the end of 2011. A full festival schedule is booked in the diary this summer.

The Return Of The Pistoleros