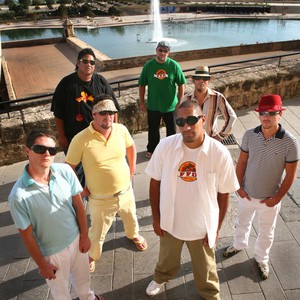 Fat Freddy's Drop is a 7 piece live Dub/Reggae band from Wellington, New Zealand. Founded in 2001, the current lineup consists of DJ Fitchie, Joe Dukie, Toby Chang, HoPepa, Chopper Reedz, Jetlag Johnson, and Dobie Blaze. The name "Fat Freddy's Drop" is a reference to a piece of blotter art that was circulating in the NZ dance scene in the late 90's. Fat Freddy's Drop have now released their second major studio album, Dr Boondigga & The Big BW - shipping GOLD on the first day of release on 26th May 2009.

The group's first major release was a live album, Live at the Matterhorn, a lengthy jam session recorded in a popular Wellington night club. Their first studio album, Based on a True Story was released in 2005. After only a day of release it had gone gold and was number one in the New Zealand album charts despite having little advertising or marketing. The album's first single, "Wandering Eye", spent 17 weeks in the RIANZ Top 40 Singles Chart and peaked at number six.

Midnight Marauders and Hope both scaled to the number one spot on Gilles Peterson's top twenty Worldwide picks in 2002 and 2003 respectively.

From the underground to the higher-ground, Fat Freddy's Drop do it for the love of music, and food!

Hope for a generation (EP)