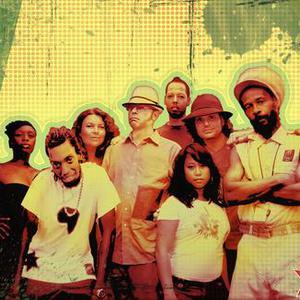 The Easy Star All-Stars are a collective family of some of the finest reggae musicians in the New York area. The band features a rotating cast drawn from a talented pool of players, meaning that every show has its own nuances and its own life. The masterminds behind the All-Stars are Easy Star musical director Michael Goldwasser (a.k.a. Michael G), frequent production partner Victor Axelrod (a.k.a. Ticklah), and Easy Star execs Eric Smith and Lem Oppenheimer.

These four were the team behind the album Dub Side of the Moon (2003), the complete reggae re-vision of Pink Floyd's Dark Side of the Moon and one of the most successful reggae albums of the 21st century. It has spent over 5 years on Billboard's Top Reggae Chart and Reggae Catalog Chart. In 2006, the band followed up Dub Side with Radiodread, a complete reggae re-vision of Radiohead's OK Computer. That record has also been a huge success, sparking great reviews, and even garnering praise from Radiohead.

Originally formed in 1997 for Easy Star Records' first recordings, the All-Stars primarily existed as a studio entity until releasing Dub Side of the Moon. The success of that album led to the formation of a touring version of the collective. The core of the touring line-up has remained relatively intact, including Ras Iray (bass/vocals), Junior Jazz (guitar/vocals), Ive-09 (drums) and Jeremy Mage (keyboards) in the rhythm section. Tamar-kali and Menny More provide additional lead and backing vocals, while the group is filled out by the Chronic Horns (Jennifer Hill on saxophone & flute and Buford O'Sullivan on trombone). The band is always mixed live by a dub engineer, usually Marcos Ferrari or Jocko Randall (of John Brown's Body). Other members of the musical collective, such as Victor Rice (Victor Rice Octet, Version City All-Stars and bassist on Dub Side of the Moon), reggae legend Ranking Joe, trumpet player Pam Fleming (of the Burning Brass), singers Kirsty Rock (of Trumystic) and Stephanie McKay, Groove Collective's Jay Rodriguez, Antibalas's Stuart Bogie, John Brown Body's Josh Driscoll, and even Ticklah and Michael G join the All-Stars on specific gigs, adding their abilities to the already talented ensemble.

The Easy Star All-Stars?in any combination of members?have been a resounding success. The band has played at numerous major festivals or headlined their own shows in the U.S., U.K., France, Italy, Chile, Poland, Turkey, Mexico, Argentina, Israel, Croatia, Ireland, Egypt, Brazil, and beyond.

As individuals, the band's vocalists and instrumentalists have toured and recorded with Burning Spear, Toots and the Maytals, Jimmy Cliff, Gil Scott-Heron, The Toasters, The Meditations, Bernie Worrell, DJ Logic, MC Solaar, King Django, Antibalas, The Scofflaws, Diana King, Dennis Brown, Monty Alexander, Sister Carol, and many others. Each of these musicians gets a chance to shine in the typical Easy Star set, whether it is through soloing, composing, or singing, or simply through playing an essential part in this tight-knit collective. Each line-up may result in slightly different sounds for this unique reggae band, but regardless of who plays, the one thing that never changes is that the Easy Star All-Stars deliver a fun, exciting, and different show every time out.

Dubber Side Of The Moon

Dub Side Of The Moon