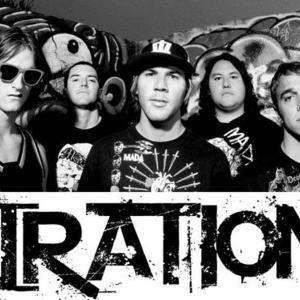 There are multiple artists/bands with the name Iration: (1) Iration is a rock/reggae band originally from Hawaii but have since relocated to Santa Barbara, CA, US. In 2007, they recorded and released their first full length album "No Time for Rest" at Castaway 7 Studios in Ventura, Ca, which featured one of the last recorded performances by reggae legend Mikey Dread. Their single ?Cookie Jar? reached number one in Hawaii on 93.9 DaBeat and was featured on Fuel TV's Triple Crown of Surfing recap. Their music was also featured on MTV shows Maui Fever and Living Lahaina.

(1) Iration is a rock/reggae band originally from Hawaii but have since relocated to Santa Barbara, CA, US. In 2007, they recorded and released their first full length album "No Time for Rest" at Castaway 7 Studios in Ventura, Ca, which featured one of the last recorded performances by reggae legend Mikey Dread. Their single ?Cookie Jar? reached number one in Hawaii on 93.9 DaBeat and was featured on Fuel TV's Triple Crown of Surfing recap. Their music was also featured on MTV shows Maui Fever and Living Lahaina.

In 2008, they embarked on a US national tour titled ?Playboys in Paradise? in support of the band Pepper. They also recently recorded four new songs, two of which were co-written by Grammy Award Winner Charles Brotman. They continue to tour extensively and look forward to bringing their sound to an even larger audience.
Albums:
2006 - New Roots ep
2007 - No Time for Rest album
2008 - Sample This ep
2010 - Time Bomb album
2011 - Fresh Grounds ep

(2) Iration is a roots reggae band composed by three brothers which begins in the heart of the Caribbean and marks the spiritual birth of their musical talent. They arrived on the island of Montserrat in the West Indies in October of 1973 as exiles of the Pinochet government and in 1981 they migrated to the United States of America. Iration was born in early 1983 and their first performance was at Ramapo High School's 1986 Talent Show in Franklin Lakes, New Jersey. Iration began playing college circuits in the US such as Bucknell University in Pennsylvania, Upsala College, The Bronx, Fort Lee etc. They frequently played at local pubs wirthin the Tri-State area and a leg of the Reggae Sunsplash in Greensboro, North Carolina on Sept. 21st, 1991 opening up for J.C. Lodge, Mojo Nya, Truth and Rights and Art Awareness Ensemble.

In April of 1992 they landed in Kingston, Jamaica to record their first single titled ?The Day After? published by Mission 101 Records. Iration is the first reggae group to have recorded professionally under this name and they performed live at the Midnite Ravers show in NYC & were interviewed at the Hapte Selassie show on WBAI Pacifica Radio FM. The single "The Day After" received extensive airplay throughout the caribbean radio programs in Manhattan, Queens and The Bronx including 1190 AM.

In mid 1993 Iration returned to their native land to promote their single extensively and this visit unexpectedly became a semi-permanent one. It was a time of tension where most who rerturned from exile were called "retornados" and music quickly became the source of inspiration to cope with this short lived social critique. Iration managed to place the single
"The Day After" within the programming of most local radio stations and including as far away as Concepcion in the southern part of Chile. Reggae music was now introduced into the mainstream radio audiences and during this period of time Iration naturally began to compose in spanish. This musical journey took them into an independent run into the Chilean underground cultural scene. Reggae music began to flourish and due to these circumstances in 1996 the "Reggae Report" magazine (USA) provided a pretty in depth look into the local reggae scene in Chile at that time (Vol. 14 # 3) and a brief review of the several emerging groups at that time and this brief summary on the talents of Iration:

"Iration is a completely different story. Three brothers: Mario (keyboards), Patricio (bass), and Gino Zamorano (drums) make up the most experienced band of the force, and perhaps the best as well. They moved with their parents to Montserrat in 1973 as political exiles of the Pinochet government. There they grew up with Reggae and other Caribbean rhythms. They then moved to New York in early 1990. Iration has played on the college circuit in the U.S. and has recorded a single in Jamaica in 1993. Moving to their beloved home country in late '94, they established themselves as the leading rhythm section in the country. Now they are rehearsing material for their debut album to be recorded this summer". Iration became the standard in the sense that they were performing with a full band including a brass section and backing vocals, something not seen asa yet in their country within this genre. At that time being independent was viewed as an ultimate suicide but they took on this challenge, giving many interviews on radio, television (mostly culturally oriented program) exposing the mission of reggae music and even turned down a deal with the transnational conglomerate of Sony Music. Iration was performing what was considered as non commercial music and had no airplay, plus their was the fact of their strong lyrical content, so they worked extensively with community radios and performed at many schools for the youth. Looking at the positive side of their music these conditions ultimately gave them the freedom to speak their minds without any limitations and cemented a strong foundation for the upcoming reggae groups in Chile.

Iration began playing in most local clubs in Santiago such as the Rockola, La Ozz, Subte Discotheque, Caribbean and Boomerang just to name a few. This was another challenge that was conquered within a reasonable amount of time by Iration even though reggae music was not even popular within this geographical area. It was years of hard work that made Iration a unique underground sensation, they eventually met the grand Dennis Stone a.k.a "DreadStone" who opened up Chile's first reggae and apparel store named "Reggae Centro" in which the youths were intimately exposed for the first time to a very broad variety of reggae music.

Currently based in S. FL, producing and promoting talented reggae artists such as singer/songwriter/drummer Bradley Brown, as well as ongoing projects with established artists such as Carlton Coffie (the original JA Bad Boy), and upcoming singjay artist Adam "Teacha" Barnes. Recording and mixing at Vybetribe Studio in S.FL as well as out of Barry O'Hare's World-A-Muzic Studio located in the historic Jack Ruby yard, Ocho Rios, JA with boomshot engineer/producer Kirk Hedge. He is also currently collaborating with riddim-kings Heddrokk Productions in Miami. Sourcing nuff dubplates from the JA young~maestro "YelloKid" himself (BIGUP YELLO!) and assisting House/Electro producer/DJ extraordinaire Austin Leeds with ongoing projects. Continuing to forward great Reggae Music with a focus on Culture/Conscious Vibes.

Iration in 1997 soon followed to pursue the recording of their material and moved to New York City for 3 years. On their return to Chile they became the opening act for groups like Los Pericos, The Wailers, Lauryn Hill, Fabulosos Cadillacs, Aut?nticos Decadentes and Matisyahu. They were chosen as backing band for the performances of Kymani Marley and Andrew Tosh on their first visit to Chile. In September of 2003 Iration was invited by Isabel Allende to participate in the Tribute to Salvador Allende ?El Sue?o Existe? sharing the scene with artistes such as Silvio Rodriguez, Shalil Shankar, Vicente Feli?, Gerardo Alfonso, Los Prisioneros, Daniela Mercury, Julieta Venegas, Salvador Ojeda, Le?n Gieco, Gilberto Gil, Daniel Viglietti, Congreso, Quilapay?n, C?sar Isella & Pedro Aznar. This was one of their best performances up to date and attendance at this tribute was around 80,000 +. Their message is clear and being an underground sensation definitely helped them stay in the cultural eyes of their people.

By late 2003 Warner Music Chile releases the album ?Fusion de Estilos 2? by the Hip-Hop group ?Zaturno & Tapia Rabia? in which Iration composes and performs the first single ?Cuando te veo pasar? of the album, the video clip aired on MTV Latino in late September and incorporated the talents of Quique Galdames of the group Illapu. Iration by now had established themselves with enough exposure and basic financing to begin preparations to remix & upgrade addecuately their first album now titled ?En Exilio / In Exile? and begin the task of making their first video clip for the song ?Chile?, a classic example of their talent and quality of composition.
Iration's album ?En Exilio / In Exile? has musicians from the U.S.A., Cuba and Chile such as Rich Tozzoli, David Brian Ondrick (USA), Lino Borbolla, Jose Ismael Gomez (Cuba), Francisco Martinez, Ruben Salgado, Loretto Canales, Karen Vergara, Damian Bodenhofer, Fabian Cordova and Efrain Rodriguez (Chile) creating a nice blend of different styles within their music. It clearly has a Caribbean flavor with a slight South American touch and their music represents their conviction to spiritually fight for a better tomorrow, leaving clear that the most important value is to be part of the solution by just simply giving "love".

Iration programmed and performed at various venues during the summer of 2008 in the United States, which kicked off at the 1st Annual Budweiser Reggae Summerfest @ RFK Stadium in DC accompanying a line-up of artistes such as Iwayne, Kymani Marley, Turbulence, Beres Hamond, Etana, Chuck Fender and Ruth among others. It is from this platform that they embarked on promoting the worldwide release of their album "En Exilio / In Exile". Also released was the single "Amor Eres Tu" - 2009 and "Instrumental" - Christmas/New Year 2010 which are all available online @ limewirestore, itunes, amazon, rhapsody, napster, emusic, lala, shockhound, imvu, nokia and amiestreet.com

Iration means creation in the patois dialect which is spoken in most of the Caribbean islands where english is the primary language.

No Time for Rest