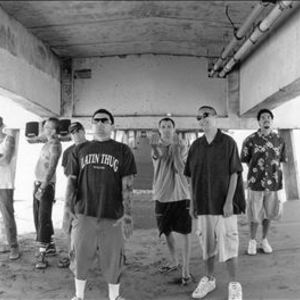 The Long Beach Dub Allstars was a dub reggae/ska/rock band formed in 1997 and disbanded in 2002.

Eric Wilson and Bud Gaugh met in childhood (in 1979) and later started their first garage punk band, consisting of drums, bass and vocals. They later formed Sublime with Brad Nowell. The Long Beach Dub Allstars (LBDAS for short) were founded after Brad died in 1996 of a heroin overdose (frequent contributors to Sublime including Michael "Miguel" Happoldt, Todd Foreman, and "Field" Marshall Goodman are also members of the band).

Eric Wilson says,"We will never replace the greatness that Sublime did or what Brad has done." The band was originally a 10-piece and they recorded their debut recording called Right Back, which shortly after completion in 1999 saw the departure of three members. Their second album, Wonders of the World was recorded and released in 2001. It featured "Sunny Hours" featuring will.i.am from the Black Eyed Peas.

In 2002 rumors that the band had broken up began to surface. Apparently the band had taken a hard-drug-free vow and some of the band's members had broken this vow, which caused Bud Gaugh to quit and join Eyes Adrift with Krist Novoselic of Nirvana and Curt Kirkwood of Meat Puppets. Gaugh was also playing with Kirkwood and Michael Happoldt in the band Volcano.[1].

Eric Wilson, Trey Pangborn and RAS-1 formed Long Beach Shortbus with former Slightly Stoopid and temporary Sublime drummer, Kelly Vargas (later replaced by Damion Ramirez). Jack Maness and Opie Ortiz formed Dubcat, with members of Hepcat. Shortbus has had slightly more success than Dubcat, though the latter has yet to release an album.

Their feel-good song "Sunny Hours" was used as the title track for the sitcom Joey.

Wonders Of The World