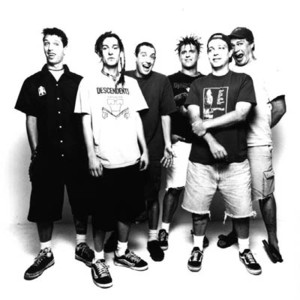 Less Than Jake is a ska-punk band formed in 1992 in Gainesville, Florida. They were recently released from their contract with Warner Brothers. Their current line-up includes Chris (vocals, guitar), Roger (bass, vocals, guitar at certain live shows), Vinnie (drums, lyricist), Buddy (trombone, bass at certain live shows) and JR (saxophone). The band's name derives from a bird Vinnie had while growing up, which was treated better than the rest of the family. It's also a reference to the phrase "everything is jake," which is an old phrase meaning everything is cool.

The band recently finished recording their latest studio album, GNV FLA, which was released in 2008. They released it themselves, through their company, Sleep it Off records.

Vinnie was previously the owner of the independent record label Fueled by Ramen, as well as a toy company called W?nderland War (formerly Monkey Vs. Robot). This label has signed bands such as Fall Out Boy, Punchline, The AKAs, Gym Class Heroes, Panic! At the Disco and Days Away. Roger, meanwhile, is in a second band, called Rehasher, for whom he composes lyrics and plays guitar. JR played sax on the last track of Off Key Melodies. JR works with a promoting company called the CT Mafia, as well as composing solo music. He contributed one track to the Drive-Thru compilation tribute to Bob Dylan, using the band name The Stay At Home Joneses (Roger sang backup for this track).

Roger and Vinnie have an unexplained fetish for Pez candy and they reportedly have sizeable dispenser collections. This love for Pez goes so far as to name one of their albums, Pezcore (parodying of the way in which many bands are described as [something]-core, starting with hardcore) and Pez dispenser motifs are a common feature of their merchandise.

Roger's employment history includes a smoke shop in the band's hometown Gainesville, Florida known as Knuckleheads which has since been transformed into a similar establishment named Smoke. Band member haunts have included Eddie C's, the Hardback (which was transformed into the Lyric), and Insomnia (which used to be the Covered Dish, and is now the new location of Common Grounds).

The members of Less Than Jake also served as backup musicians for Asian Man Records owner Mike Park in the B.Lee Band (once called "The Bruce Lee Band", changed for legal reasons).

The track "Look What Happened" appeared on two of their albums, "Borders & Boundaries" (2000) and "Anthem." (2003) The "Anthem" version is completely re-recorded, and has eschewed the brass at the beginning of the song that was featured in the previous recording. The re-recording features guest vocals from Teen Idols/Bullets To Broadway's Heather.

They have also re-recorded many other songs, including "Johnny Quest Thinks We're Sellouts," "Jen Doesn't Like Me Anymore" and "Shotgun".

They recorded the main theme song "We're all Dudes" for the 1997 film "Goodburger" based on the sketch from the Nikelodeon TV show "All That." The song features Kel Mitchell (main character, Ed, in the movie). The song is based off of the jingle "Ed" would always sing while waiting for the next situation to come up in the Goodburger sketches. At the end of the song Mitchell says "Ah, Ed and Less than Jake, oh, uh... no?"

In 2004, Less Than Jake appeared on the Projekt Revolution Tour, joining such artists as The Used, Snoop Dogg, Korn, and the headlining band: Linkin Park.

Greetings From Less Than Jake (EP)