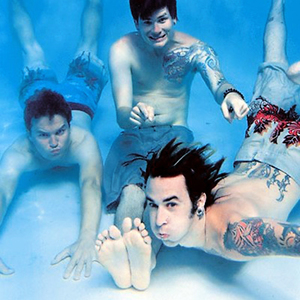 Blink-182 is a pop punk band from San Diego, California formed in 1992 by Tom DeLonge, Mark Hoppus, and Scott Raynor. In 1998, Raynor was replaced by Travis Barker, and in early 2005 DeLonge left the group, initiating an indefinite hiatus. DeLonge went on to form Angels & Airwaves, while Hoppus and Barker formed +44. On February 8, 2009, blink-182 announced that they had reunited. Early years (1992-1998)

In May 1993, Blink recorded their first demo tape, entitled "Flyswatter", in drummer Scott Raynor's bedroom. A 4-track was used to record the material. According to Hoppus, only around fifty copies of the demo were produced to give to their family and friends. Before the end of the year, the band released another two demos, one commonly known as Demo #2 while the other was entitled Buddha. Of this last record around 1,000 copies were produced by Filter Records, an independent record company headed by Hoppus's boss.

In early 1994, Blink signed with Cargo Records. The band recorded their d?but full-length album, "Cheshire Cat" in three days. The album contained a number of updated versions of songs such as "Carousel", "Strings", "Sometimes" and "TV" that had appeared on the "Buddha Promo Tape" as well as some originals.

Shortly after the release of "Cheshire Cat", Blink was threatened with legal action by a pop band in Ireland of the same name. In order to avoid a dispute, Blink appended "182" to the end of their name. The band has cited a variety of reasons for ultimately choosing 182, with some of the more common explanations being the number of times Tony Montana utters the word "fuck" in Scarface, references to the 1985 Timothy Hutton film, Turk 182!, the band's ideal weight, the number of half the days in a year and the number of miles Hoppus had to drive to visit his girlfriend. However, DeLonge has stated that it is just a number that they "pulled out of their ass".

After moving to Encinitas, California, the band recorded the album "Dude Ranch" in 1996 with producer Mark Trombino. blink-182 recorded the album under Cargo Records, but signed with MCA which later became Geffen Records in 1996, in order to handle increased distribution. The album was released in 1997 and was relatively commercially successful, selling 4 million copies worldwide.

The single "Dammit" did well on U.S. modern rock charts, however drummer Scott Raynor later left the band. There are two common explanations for his removal - that Raynor had a serious drinking problem and was asked to go into rehab or face ejection, or alternately, that he departed in order to attend college. Raynor claims he agreed to go to rehab, but that DeLonge and Hoppus were doubtful of his sincerity and subsequently fired him over the phone.

Hoppus and DeLonge had asked drummer Travis Barker of blink-182's support band The Aquabats to fill in for Raynor for the remainder of the tour, thus he had to learn all of the songs in a matter of hours before the show. He ultimately went on to join the band permanently afterwards, leaving The Aquabats.

In 1999, blink-182 hired Jerry Finn as its producer and recorded "Enema of the State". This album propelled the band into the mainstream with hit singles "What's My Age Again?", "All the Small Things" and "Adam's Song". All gained a significant amount of airtime on radio and MTV. Enema of the State went on to sell over 10 million copies worldwide making it the band's best-selling album to that point.

In 1999 the band also had small parts in the film American Pie, though Travis Barker was incorrectly credited as Scott Raynor.

In 2000, the band released The Urethra Chronicles, a DVD which featured behind-the-scenes information. "The Mark, Tom, and Travis Show: The Enema Strikes Back", blink-182's live album, was also released in 2000, featuring songs from their three full-length records. The album also included one new studio song, "Man Overboard," among the live renditions. The album quickly went out of print making it a much sought after item. A limited edition was printed in October 2006.

The band continued its commercial success with "Take Off Your Pants and Jacket" in 2001, which was in the same vein as "Enema of the State". However, a European tour in winter 2001 was canceled in the aftermath of the September 11th attacks. Rescheduled dates in early 2002 were also canceled due to DeLonge's problems with his back.

In 2002, blink-182 co-headlined the Pop Disaster Tour with Green Day, along with supporting acts Jimmy Eat World and a little known band called Kut U Up. The tour was documented, from Kut U Up's point of view, on the DVD Riding In Vans With Boys.

After taking some time off in 2002, recording of the next record began in early 2003. The band released its next studio album on November 18, 2003. It featured the hit singles "Feeling This", "I Miss You", "Down", and "Always". According to Barker, the "Untitled" record was supposed to represent a new blink-182. It received significant airplay on radio and TV. The Cure front man Robert Smith, often cited as a major influence on the band, appeared on "All of This". During late 2003, the band embarked on the "Dolla Bill" tour, named for the inexpensive ticket costs (It was originally planned to be completely free but later realised that it would be necessary to charge something for the ticket). A tour with No Doubt in the summer of 2004 was also very successful.

In mid-February 2005 the band inexplicably cancelled a performance at Music for Relief's Concert for South Asia (a show put on to aid victims of the devastating 2004 Indian Ocean earthquake). Shortly there after, before a planned final US spring tour, on February 22, 2005, the band announced they were going on an "indefinite hiatus".

Geffen Records released a Greatest Hits compilation on November 1, 2005 in the U.S., one previously unreleased track was included "Another Girl Another Planet" (a cover song originally by The Only Ones). The song was also used as the theme song to Barker's new reality TV show, Meet the Barkers. Included was the previously issued "I Miss You" B-side and blink-182 album bonus track "Not Now". The album reached number 6 on the Billboard 200 in the United States.

DeLonge announced his new band, Angels & Airwaves. As his reason for why blink-182 went on indefinite hiatus, DeLonge suggested the mounting tension between himself and Hoppus, ultimately caused by DeLonge's desire for a break with his family coupled with Hoppus' feelings of betrayal after the formation of Box Car Racer. He also announced his plans to create a film about the final days of blink-182. Angels & Airwaves released their debut album "We Don't Need to Whisper" on May 23rd, 2006, where it debuted at number 4 on the Billboard 200.

Hoppus and Barker's new project +44 surfaced on December 13, 2005 with the song, "No It Isn't". Coincidentally, the song was released on +44's official MySpace on the same day that Angels & Airwaves were slated to release their first song (and also Tom DeLonge's 30th birthday), though the release of the latter was delayed. Initially, Hoppus was hesitant to admit any deliberate correlation between the song and breakup, but has since admitted the song was about DeLonge and the breakup of the band. +44 released their first album "When Your Heart Stops Beating" on November 14, 2006 and debuted at number 10 on the Billboard 200.

In August 2006, Hoppus gave an extensive interview with B182.com. The interview focused on blink-182 and the unexplained events that had led to the band's hiatus. Contrary to DeLonge's statements, Hoppus said that the band had been getting along at the time of their final album. Hoppus went on to say that DeLonge requested a half-year respite from touring to spend time with his family, despite a planned final spring U.S. tour. Hoppus and Barker hesitantly conceded, leading to the cancellation of the upcoming tour. Further problems arose in discussions regarding the band's future recording endeavors. It was at this point that Hoppus felt that blink-182 had ceased functioning as a band. Hoppus went on to state that he and Barker eventually formed +44 at the end of the European leg out of frustration for DeLonge's constant reluctance's.

On April 5, 2007, it was confirmed that blink-182, along with Rancid and Green Day are some of the bands set to feature in a documentary about modern punk music. The film is titled One Nine Nine Four and looks at the genre of music in the nineties. It will consist of band interviews and archive footage, which will be all compiled together by the documentary makers Robot Academy Films in [pace]Australia. It's expected to be released early next year. Skateboarding legend Tony Hawk will narrate the film, which also features the likes of NOFX and The Offspring.

Travis Barker of +44 currently was asked if the band would get back together. He said "I don't know, I haven't talked to Tom in a long time. I do however talk to Mark everyday."

On November 18th, 2008, after Travis Barker was in a small plane crash, Mark Hoppus updated his blog, himynameismark, with this statement:
"in the midst of everything else that has happened lately, tom, Travis, and i have all spoken together. first through a number of phone calls, and then a couple of weeks ago we all hung out for a few hours. they've all been great, very positive conversations. we're just reconnecting as friends after four years of not talking. it's a good thing."

He also stated that this doesn't mean a blink-182 reunion, but after several years they have finally begun speaking to each other again. Hoppus also talked about Travis Barker's brush with death in a plane crash in September 2008 and the death of their great friend and longtime producer Jerry Finn.

Not Another Christmas Song (CDS)

Blame It On My Youth (CDS)