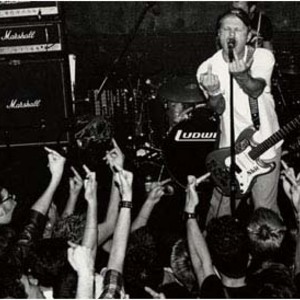 The Queers are a pop punk band from Portsmouth, New Hampshire, formed in 1982. Singer/Guitarist/Songwriter Joe King has been the principal member of the group, with a vast number of musicians cycling in and out of the band over the years. Supposedly, the band name 'Queers' was used simply to poke fun at what he called the "Art Fag" community in NH. That same brand of humor and inanity has become a staple of The Queers music, who have produced songs such as "Can't Stop Farting", "Born To Do Dishes", and "I Didn't Get Invited To The Prom" in their own Ramones-esque style.

While some punk rock bands attempt to use their music to impart a social or political message, King has made it clear that The Queers exist simply to play punk rock for the fun of it.

The Queers play a Ramones style of pop punk with songs about girls and beer. King has often collaborated with Ben Weasel, from Screeching Weasel. The band begun with a notoriety primarily in their own backyard, but with the release of Love Songs for the Retarded, recorded by legendary punk producer Mass Giorgini, their following grew to international proportions. They have collaborated with Mass Giorgini several times since.

Along with his casual acquaintance Ben Weasel, Joe King has criticized the re-emergence of the street punk scene and what he sees as the glorification of violence and class warfare by certain bands. The song, "Little Rich Working Class Oi Boy" from the album Beyond the Valley of the Assfuckers takes aim at the working class pretensions and bellicose attitudes of some members of the Oi! scene. In a 2005 post to The Queers official website, King criticizes the effect of Boston punk band, the Dropkick Murphys. Writes King, "With all this stupid fucking Irish/Dropkick BS these days the whole punk scene (what's left of it) is full of assholes that just wanna fight."

Back to the Basement

Love Songs For The Retarded