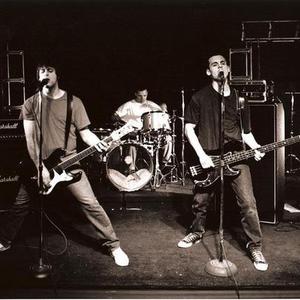 Riverdales are an American punk rock band from Chicago, Illinois made up of former Screeching Weasel members. Bassist Dan Vapid (born Dan Schafer) and guitarist Ben Weasel (n?e Ben Foster) both served as front men, splitting time singing lead vocals for the group. The Riverdales' original run lasted from 1994-1997. They reformed in 2003 to record their third album, and they once again reformed in 2008 and released a new record in July of 2009, followed by another exactly a year later.

Named after the small town of Riverdale from the Archie Comics, The Riverdales formed in 1994. The founding members, Foster (guitar), Dan Schafer (bass), and Dan Sullivan (drums), were all former members of Screeching Weasel, who had broken up earlier that year. Unlike Screeching Weasel, the members of The Riverdales would be credited under their real names. They released their self-titled debut album on July 7, 1995, on Lookout! Records. It was produced by Green Day's Billie Joe Armstrong and Squirtgun's Mass Giorgini. They toured extensively that year as the opening act for the Mr. T Experience, and then for Green Day. Playing off this synergy, the Riverdales supported Green Day's 1995 tour. Also that year, the bands song "Back To You" appeared in the movie Angus. Despite the reformation of Screeching Weasel in 1996, the Riverdales did not split until after recording a second album, Storm The Streets in 1997, and only reforming briefly in 2003 to record Phase 3.

In 2004, Ben Foster rescinded all of the Riverdales masters from Lookout! Records after being unable to resolve a breach of contract dispute over unpaid royalties with the label. All of these masters had then been licensed to Asian Man Records. Asian Man reissued the first Riverdales album in 2006 with re-mastered sound and a slew of bonus tracks including three unreleased tracks, "No Sense" from the Storm the Streets sessions, and live tracks from their tour with Green Day. The Label also re-issued Phase 3 on October 7th, 2008 with five bonus tracks.

On November 19th, 2008, on his ESPN radio show, Weasel Radio, Ben Weasel announced that he and Danny Vapid had been demoing songs for a new Riverdales album, and recording would begin in February of 2009. He also announced that The Riverdales will be playing live shows again and that Adam Cargin (of the Blueheels) would be the band's new drummer. The album, titled Invasion USA was released on July 14, 2009.

In September 2009, it was announced that Simon Lamb would be joining the band as second guitarist [5]. Prior to that, for live purposes, Dan Schafer was playing second guitar (with a notably louder amp) and singing while Justin Perkins, who had recorded Invasion U.S.A., played bass. A couple months later, in November, 2009, Mike Park of Asian Man Records announced that Ben had decided to sever his relationship with the label and that Recess Records would now be carrying the Screeching Weasel, Riverdales, and Ben Weasel solo back catalogs.

On December 13, 2009, Ben Weasel announced on his Twitter that the fifth Riverdales album would be called Tarantula. They began recording the next day. Ben has stated that if he had it his way, Invasion USA would have been a double LP and to consider Tarantula part 2 of Invasion USA. So the songs on this album will be similar to the songs on Invasion USA, having titles based on old, low budget sci fi and horror films, but with a sound closer to The Ramones album "Subterranean Jungle." Tarantula was released in July 2010.

In December 2010, the band announced they had signed to Fat Wreck Chords, and the label would be re-releasing some of their old material.

In March 2011, Ben Weasel was involved in an altercation with two female audience members at a Screeching Weasel show at the Austin, Texas SXSW Festival. This resulted in the other members of both Screeching Weasel and the Riverdales quitting the band. In the aftermath of this, former members Dan Vapid and Simon Lamb started a solo project called Dan Vapid and The Cheats with whom Vapid will be singing his Riverdales songs.