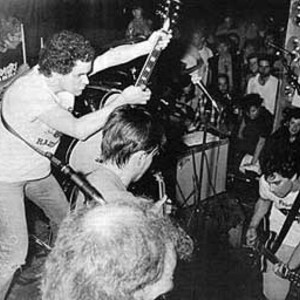 Angry Samoans are an early Los Angeles, CA, USA hardcore punk band, formed by rock critics "Metal" Mike Saunders and Gregg Turner after the demise of Vom, with fellow critic Richard Meltzer in 1978. Their unspecified grudges against influential KROQ DJ Rodney Bingenheimer caused them to write a defamatory song called "Get Off the Air," which caused many Los Angeles clubs to avoid booking them until the mid 1980s. The band's particularly offensive, politically incorrect attitude and lyrical content probably contributed to this situation as well.

AS put out a 7 inch as The Queer Pills in 1981 including the classic punk anthem "They Saved Hitler's Cock" which seems to be played on XM Radio's Fungus 53 station with hilarious regularity in 2007.

Angry Samoans began as Vom in 1976, a self-described beat combo featuring the reknowned writer and critic Richard Meltzer on vocals, with Turner on guitar and 2nd vocals and Saunders on drums. The band also featured Dave Guzman on "tuneless rhythm guitar," 'Gurl' on bass guitar, and Phil Koehn on lead guitar. The name Vom is short for 'vomit', as their early live act is said by Meltzer and Turner to have included throwing various 'viscera', cow parts and food substances at the audience to provoke reaction.

The first Angry Samoans gig was opening for Roky Erickson And The Aliens in Richmond, CA in 1978. In the middle 1980s Angry Samoans returned to their roots in 1960s garage rock (they had always cited the 13th Floor Elevators as being their major influence) and put out two releases, Yesterday Started Tomorrow EP and Stp Not Lsd. Singer/bassist Todd Homer left in 1989, and formed The Mooseheart Faith Stellar Groove Band with Larry Robinson, formerly of 1970s teen pop-soul band Apollo. Turner left soon afterwards, putting out an album in 1993 with The Mistaken before forming his current band, The Blood Drained Cows. Metal Mike formed his own group, featuring a catchy cover, "My Girlfriend Is A Rock." Angry Samoans continued with Saunders, drummer Bill Vockeroth, and a wide variety of other individuals, like Kevin Joseph AKA Mutt, sporadically active throughout the 1990s and into the new millennium.