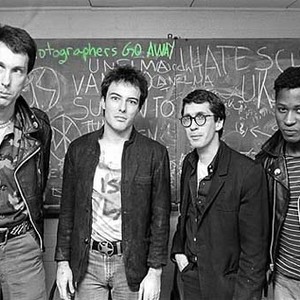 Dead Kennedys are a hardcore punk/punk rock band from San Francisco, California. During the 1980s the band gained a large underground following in the international punk music scene. Their music mixed the more experimental elements of English 1970s punk with the raw energy of the 1980s American hardcore punk scene. Dead Kennedys' songs mix the deliberately shocking lyrics of punk with a satirical and sarcastic left-wing commentary on social and political issues.

Many of the band's songs criticize the religious right and the Ronald Reagan administration, along with many other personalities and ideas.

Dead Kennedys formed in San Francisco in 1978 when vocalist Jello Biafra (Eric Reed Boucher) and bassist Klaus Flouride (Geoffrey Lyall) responded to a magazine ad placed by guitarist 'East Bay Ray' (Raymond Pepperell). The three joined with drummer '6025' (Carlos Cadona) as a drummer, but he was quickly replaced by 'Ted' (Bruce Slesinger) and formed one of the most successful hardcore punk bands of the 80s. Later the same year, '6025' was invited back as a second guitarist, but he quit the band again in 1979.

The band played hard and fast punk that matched the raw energy of the West-coast scene with twists such as Ray's surf-guitar influences and Jello's nasal machine-gun vocals and political fervor conveyed through furious left-wing rants. Their first show was on July 19, 1978, at the Mabuhay Gardens in San Francisco, California.

After this The Dead Kennedys played numerous shows at local venues afterwards. Due to the band's provocative name, they sometimes played under pseudonyms, including "The Sharks", "The Creamsicles" and "The Pink Twinkies". The name, despite popular belief, was not meant to insult the assassinated Kennedy brothers, but to quote Biafra, "to bring attention to the end of the American Dream".

The band released their first single, "California Uber Alles" in 1979 and first album, Fresh Fruit for Rotting Vegetables in 1980 on Jello's own Alternative Tentacles record label. Fresh Fruit for Rotting Vegetables is considered a punk classic. The album reached #33 in the UK Albums Chart. In January of 1981, Ted announced that he wanted to leave to pursue a career in architecture and would help look for a replacement. He played his last concert in February. His replacement was D.H. Peligro (Darren Henley).

In May, the band released the single "Too Drunk to Fuck". The song caused much controversy in the UK as BBC feared the single would reach the Top 30; this would require a mention of the song on Top of the Pops. However, this never came to be as the single peaked at #31. It is also likely that had "Too Drunk to Fuck" (retitled "Too Drunk To" by the BBC) hit the top 30, it would have been banned from playing, in the fashion of The Exploited.

With Peligro's propulsive drums behind the band, 1981's EP In God We Trust, Inc. saw them moving toward full on hardcore/thrash. In addition to the EP's controversial artwork depicting a gold Christ figure on a cross of dollar bills, the lyrics contained Biafra's most biting social and political commentary yet, and songs such as "Moral Majority", "Nazi Punks Fuck Off" and "We've Got a Bigger Problem Now" put the DKs on the map as the leaders of a social movement (which would not see fruition until "alternative" music gained mainstream acceptance a decade later with grunge).

The band continued touring all over the United States, as well as Europe and Australia, and gained a large underground following. While they continued to play live shows during 1983 and '84, they took a break from releasing new records to concentrate on the Alternative Tentacles record label, which would become synonymous with D.I.Y. alternative culture, independent from and in contrast to the commercialized sterile cultural landscape the world had become since the "cultural revolution" of the '60s faded into the yuppie '80s.

The Kennedys were beset by controversy with the 1985 release of their Frankenchrist album, which was packaged with an 'obscene' poster by Swiss artist H.R. Giger. The resulting trial ravaged the band financially and personally, and in February 1986 they broke up the band only to still record material and release the album Bedtime for Democracy in November. Protracted royalty battles between Jello and his ex-bandmates, which lasted up through the 1990's dashed any hope of a complete reunion.

However, in 2001, Ray, Flouride and Peligro united with singer Brandon Cruz under the name DK Kennedys. After performing several concerts under this name, the name was changed back to the original Dead Kennedys. In 2003 Cruz was replaced by Jeff Penalty. Two live compilations have been released since the partial reunion: Mutiny on the Bay, notably featuring a version of "Kill the Poor" from their final show with Biafra in 1986, and Live at the Deaf Club, a recording of a 1976 performance prior to the release of Fresh Fruit for Rotting Vegetables, which features 6025 as second guitar and Ted as drummer. In October 2007 a best-of album entitled Milking The Sacred Cow was released.

Jeff Penalty left the band in March 2008 on bad terms and was replaced by former Wynona Riders singer Skip. D.H. Peligro also left due to personal reasons and was replaced by Dave Schreff. On August 21, 2008, the band announced they would not tour in the foreseeable future due to the health issues of Flouride and Peligro. Flouride would continue performing locally and Ray and Skip have announced they will continue to release work under a new band name.

Mutiny On The Bay