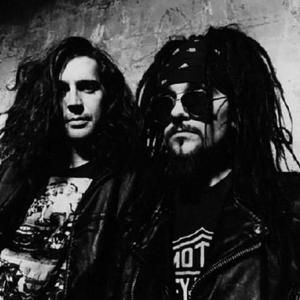 Ministry was formed in Chicago, Illinois in 1981 by Alain Jourgensen (born Oct. 8, 1958, Havana, Cuba), who had previously been in a new wave band called Special Affect (fronted by future My Life with the Thrill Kill Kult leader Frankie Nardiello, aka Groovie Mann). With drummer Stephen George, Ministry debuted with the Wax Trax! single Cold Life, which -- typical of their early output -- was in the synth pop/dance style of new wavers like the Human League and Thompson Twins.

With drummer Stephen George, Ministry debuted with the Wax Trax! single Cold Life, which -- typical of their early output -- was in the synth pop/dance style of new wavers like the Human League and Thompson Twins. The album With Sympathy, on the major label Arista in 1983, followed a similar musical direction -- one that Jourgensen was dissatisfied with. He returned to Wax Trax! and recorded several singles while rethinking the band's style and forming his notorious side project, the Revolting Cocks.

In 1985, with Jourgensen the only official member of Ministry, the Adrian Sherwood-produced Twitch was released by Sire Records. While not as aggressive as the group's later material, it took definite steps in that direction. Following a 1987 single with Skinny Puppy's Kevin Ogilvie (aka nivek ogre) as PTP, Jourgensen once again revamped Ministry, with former Blackouts bassist Paul Barker officially joining the lineup to complement Jourgensen's rediscovery of the guitar. Fellow ex-Blackouts William Rieflin (drums) and Mike Scaccia (guitar), as well as vocalist Chris Connelly, were heavily showcased as collaborators for the first of several times on 1988's The Land of Rape and Honey. With Jourgensen and Barker credited as Hypo Luxa and Hermes Pan, respectively, this album proved to be Ministry's stylistic breakthrough, a taut, explosive fusion of heavy metal, industrial dance beats, samples and punk aggression.

1989's The Mind Is a Terrible Thing to Taste built on its predecessor's artistic success, and In Case You Didn't Feel Like Showing Up was recorded on its supporting tour, introducing collaborators like drummer Martin Atkins (ex-Public Image Ltd., later of Pigface), guitarist William Tucker, and Jello Biafra). Jourgensen embarked on a flurry of side projects, including the Revolting Cocks (with Barker, Barker's brother Roland, Front 242 members Luc Van Acker and Richard 23, and many more), 1000 Homo DJs (with Biafra, Rieflin, and Trent Reznor), Acid Horse (with Cabaret Voltaire), Pailhead (with Ian MacKaye), and Lard (with Biafra, Barker and Rieflin).

In late 1991, Ministry issued the single Jesus Built My Hotrod, a driving rocker featuring manic nonsense vocals by co-writer Gibby Haynes of the Butthole Surfers; its exposure on MTV helped build anticipation for the following year's full-length Psalm 69 (subtitled The Way to Succeed & the Way to Suck Eggs, although the only title that appears on the album consists of a few Greek letters and symbols). The record reached the Top 30 and went platinum, producing two further MTV hits, N.W.O. and Just One Fix. Ministry consolidated its following with a spot on the second Lollapalooza tour that summer, joined by guitarist Louis Svitek. However, drug and legal problems sidelined the band in the wake of its newfound popularity, resulting in the clouded Filth Pig being released in 1995, too late to capitalize on their prior success.

More problems with drugs and arrests followed, and Jourgensen returned to some of his side projects, recording a new album with Lard, among others. In 1999, the single Bad Blood was featured prominently in the sci-fi blockbuster The Matrix, setting the stage for the release of Dark Side of the Spoon (the title a reference to the band's heroin problems) later that summer.

The band was nominated for a Grammy in 2000 for "Bad Blood," but they lost to Black Sabbath, and were dropped from Warner Bros. around the same time. They were also added to the Ozzfest tour but were kicked off before it began because of a management change. To compound their sorrows, Ipecac Records announced three live albums to be released, with material from the Psalm 69 tour being the main focus, but when Warner Bros. caught wind of the project they stamped it out, despite the CDs already being ready for printing.

In 2001, the band filmed a scene for Steven Spielberg's A.I. and released the song from the film on a greatest-hits album, appropriately titled Greatest Fits. The group signed to Sanctuary Records later in the year. They released the Sphinctour album and DVD in the spring of 2002 to satisfy fans who were disappointed by the Ipecac situation. The next spring, Animositisomina was released, advertised as a return to the Psalm 69 style of songwriting, and featuring a cover of Magazine's The Light Pours Out of Me. Houses Of The Mol&eacute; followed in June 2004.

In September 2005 Ministry celebrated their 25th anniversary with Rantology. Jourgensen remixed such hits as "Jesus Built My Hotrod" and "N.W.O. for the set, which also included live material, rarities, and the new track Great Satan. An extensive tour with Revolting Cocks followed.

In 2007, after nearly three decades, nearly a dozen studio albums, and four Grammy nominations, Ministry announced that the album The Last Sucker would be its last. The album completed an uber-critical trilogy aimed at exposing the foils, failures and fabrications of the George W. Bush administration. Ministry embarked on its "final" world tour in the spring of 2008 ? the ?C U LaTour.?

Jourgenson then concentrated on running his label, 13th Planet Records. Three post-break-up Ministry albums were released: The Last Dubber, a remix album of The Last Sucker; Cover Up, a compilation of new and old cover versions by Ministry; and Adios, a live album documenting the "C U LaTour".

On August 7, 2011, it was announced that Ministry was reforming and would play at Germany's Wacken Open Air festival, set to take place August 2-4, 2012. The reunion lineup featured Jourgensen on vocals, Scaccia and Tommy Victor both on guitar, Aaron Rossi on drums, John Bechdel on keyboards and Tony Campos on bass.

Jourgensen told Metal Hammer in August 2011 that Ministry had been working on a new album called Relapse. "Bush is gone, so it's time for something new," he said. "I think this is actually gonna wind up being the fastest and heaviest record I've ever done."

Ministry announced on their website that they entered the studio on September 1, 2011 with engineer Sammy D'Ambruoso to begin recording their new album. On December 23, 2011, Ministry released "99%", the first single from Relapse. The album was released on March 23, 2012.

Houses Of The Mole - Limited Gold