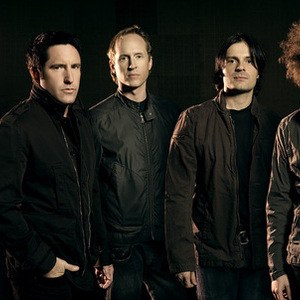 Nine Inch Nails is an American industrial rock band that was formed in Cleveland, Ohio, United States in 1988 by Trent Reznor, the only constant member of the band. He is generally credited for popularizing the genre known as "industrial rock". Born Michael Trent Reznor, he was raised by his maternal grandparents in Mercer, Pennsylvania, USA. Reznor took up piano at the age of five and in high school took up the tuba and saxophone. During the early to mid 80s Trent played with various synthpop and new wave groups such as Exotic Birds and Option 30 before beginning his solo project.

Born Michael Trent Reznor, he was raised by his maternal grandparents in Mercer, Pennsylvania, USA. Reznor took up piano at the age of five and in high school took up the tuba and saxophone. During the early to mid 80s Trent played with various synthpop and new wave groups such as Exotic Birds and Option 30 before beginning his solo project. As a member of Exotic Birds, he appeared in the Michael J. Fox & Joan Jett film Light of Day.

Nine Inch Nails has issued eight major albums. With the inclusion of Broken EP, the band's primary releases are:

In 2002, a live album (their second live release, the first being the video Closure Documentary) entitled And All That Could Have Been was released on DVD & CD, the Deluxe version of the CD came packaged with a mini album called Still. "Still" features several previously released songs in a stripped down, near-acoustic format, along with several other new compositions.

Historically, NIN releases have been assigned a "Halo" index number.

Nine Inch Nails as a live band is generally understood to be a separate entity from its recording studio-based component. Occasionally, past band members are invited to participate in the process, but when not directly involved with recording new material, Nine Inch Nails' lineup tends to change drastically between major tours. Aside from Trent Reznor remaining on lead vocals, nothing about the live band has remained constant since its inception. Reznor cited the long gestation period between studio albums as part of the reason for these frequent personnel changes. Beginning in late 2005, the live band featured Aaron North on guitar, Jeordie White on bass guitar, Alessandro Cortini on keyboards, and Josh Freese on drums, though all occasionally performed with different instruments. This lineup toured Europe, Asia, Australia, and America through 2007. Trent Reznor reported that he would disband the "rock band configuration" of his touring lineup after their concert in Honolulu, Hawaii on September 18, 2007, and would explore other means to perform Nine Inch Nails material on subsequent tours. Despite this claim he has regained the rock group lineup for the 'Lights In The Sky Over...' tours with Robin Finck returning on guitar and Justin Meldal-Johnsen of Beck and other projects accompanying Cortini and Freese.

The September 14, 2007 edition of the Honolulu Star-Bulletin reported that the September 18 show in Honolulu, Hawaii would be the last performance of the current incarnation of the Nine Inch Nails live band. Trent Reznor was quoted as stating, "at this point, I want to switch things around a bit. Nine Inch Nails as a rock band configuration, we've done it and we've done it again. I see other ways I can present the material in concert, more challenging, something new. I don't want it to go stale."

A DVD/Blu-Ray/HD-DVD of live material from the 2006 With Teeth tour was released in late February 2007 entitled Nine Inch Nails Live: Beside You In Time. All three formats include 24 songs from the summer and winter 2006 tours, plus bonus material.

Information about Nine Inch Nails concerts can be found on the NIN website.

Ghosts I-IV was released on March 2, 2008. It contains 36 instrumental tracks and was recorded in ten weeks of fall 2007. Initially intended to be a five-track EP, the album is presented in the form of four nine-track EPs. The tracks do not have names, and are only identified by their track listing and position on the EPs. Ghosts I-IV also adds to the recent experimentation with digital distribution; the album is available in many different ways, including a digital download, for purchase or (partially) free, a CD set, and a deluxe edition set.

The eighth album called "The Slip" was officially released on May 5, 2008. The whole album can be downloaded for free from this website: Nine Inch Nails - The Slip

On February 16th 2009, Trent announced that he would begin his last tour. Nine Inch Nails would indefinitely end. However, it is not likely that this is the end of his music career. In his letter, he hinted that he may do something with Jane's Addiction. In addition, Reznor has said outright in an interview on the official website that he is not done making music as Nine Inch Nails, but that he is done touring.

Trivia:
* Trent Reznor has worked with several big names in musical collaboration outside of NIN in recent years, including time rocker artist David Bowie, Maynard James Keenan of Tool, Zach De La Rocha of Rage Against the Machine, Peter Murphy of Bauhaus, Josh Wink, Ice Cube, Dr. Dre, slam poet Saul Williams, hip-hop producer Puff Daddy & The Family, Peter Gabriel, Henry Rollins and more recently, hip-hop producer El-P and Queens of the Stone Age.
* Contrary to popular belief, Suck is technically a cover and not an original. The song was originally performed by the band Pigface on the album Gub (1991), a band which Trent worked with in the past. Trent is given vocal and writing credits and the song was later re-recorded for the Broken EP (1992) as a hidden track .
* Legendary country star Johnny Cash covered Hurt on the album The Man Comes Around.
* NIN along with Marilyn Manson, Maynard James Keenan, Phil Anselmo and other artists worked together to produce the Tapeworm Project, a side project that existed from the mid-1990s through to 2004.