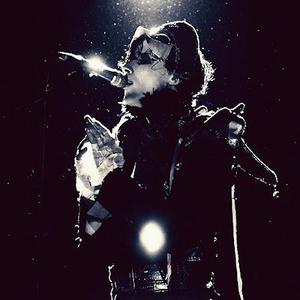 IAMX is the solo musical project of Chris Corner (of Sneaker Pimps). Corner has repeatedly said that IAMX is very different to his actual, real-life personality and is a kind of quasi ?act?. Whether an act or not, IAMX's music is primarily concerned with subjects such as outlandish sex, death, narcotic intoxication, bisexuality, obsession, alienation and vague allusions to politics. Some musicians are meant to be heard but not seen - merely an auditory experience and nothing more. IAMX, on the other hand, isn't merely a band.

Some musicians are meant to be heard but not seen - merely an auditory experience and nothing more. IAMX, on the other hand, isn't merely a band... it's an event - a full-on aural and visual attack with the dynamic and inimitable musician and songwriter Chris Corner (of Sneaker Pimps) leading the charge.

With the European marketplace going crazy for his blend of dramatic synth-rock, darkness-infused pop, and intricately-constructed indie dance, IAMX, originally from the Middlesbrough, United Kingdom but currently based in Berlin, has been headlining festivals in Austria, Belgium, Czech Republic, Poland, Ukraine etc. and sharing the stage with Placebo, Franz Ferdinand, and The Cardigans among others.

Like an 80s electro glam soundtrack to a Jan ?vankmajer film or an almost unfathomable hybrid between the sexy swagger of Prince and the cool and collected respectability of Roxy Music, IAMX mixes Chris' erotically-charged vocals with music that is, at once, frantic yet controlled.

With such strikingly cinematic songs as the waltzy drama of "President" to the percussive sexual predatory dirtiness of "The Negative Sex" to the indelibly infectious synthpop of the sweeping "Spit It Out", The Alternative is exactly just that - the alternative to the cookie-cutter music scene that dominates the airwaves. Considering the rabid reception he receives from his performances, it seems it's time for the masses to grasp The Alternative.

The beginning of 2011 have witnessed the newest IAMX effort, Volatile Times. The sound quality being on par with virtually no fillers, the album draws on cabaret style (Bernadette is an example), another highlights include a fragile and haunting hymn of I Salute You, Christopher, wooshing and energetically charged Into the Asylum with probably the most outspoken hysteria feel ever seen on Corner's songs, as well a sonic masterpiece Commanded by Voices with its waving and rippling yet mellow intro chords..

The first single from Volatile Times, Ghosts of Utopia, was released in Feb. 2011 and the video premiered in a short span of time. What would be the next Corners' artistic step is remaining to be seen.

Everything Is Burning (Metanoia Addendum) CD2

Everything Is Burning (Metanoia Addendum) CD1