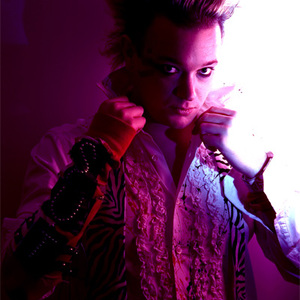 John Bryn Williams (born 1977 in Maidenhead, Berkshire, United Kingdom) is a drum and bass DJ and producer from the UK. He is widely known for having very wild hair and a talent for producing cutting edge drum and bass tracks. While his trademark sound has evolved through the years, it generally involves catchy female vocals and trance-like synths (at one point this style was dubbed "trance and bass").

His most recent sound of choice is '80s and electroclash influenced, electro/drum n bass (at one point dubbed "electrostep") which at first (around early 2002) seemed very odd (and comical) to some in the drum and bass community. However, this move has given John the ability to carrying drum and bass forward in his own special way. He has dabbled in dark tearout drum n bass, as well as experimenting in jazz influences, and other styles too numerous to list here.

John B started producing music at the age of 13 and now is the head of drum and bass record label called Beta Recordings. He also runs three other sub-labels called Nu Electro, Tangent, and Chihuahua respectively. These labels were formed to cater to the more diverse subgenres of drum n bass.

He was educated at Durham University...