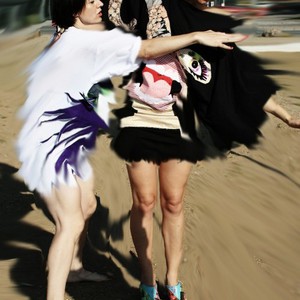 Chicks on Speed are a female electroclash band, born when Alex and Melissa met at the Munich Art Academy in 1997. Chicks on Speed's core members are Melissa Logan (Upstate NY, USA) and Alex Murray-Leslie (Bowral, Australia), who collaborate with amongst others Anat Ben-David (Tel Aviv, Israel), Kathi Glas (Berlin, Germany) and A.L. Steiner (NY, USA). Around Chicks on Speed there is grouped a large and ever-changing collective of musicians, producers, fashion and graphic artists, designers, film and video makers, and so on.

Though usually considered part of such musical genres as electroclash, actually Chicks on Speed started as a multidisciplinary art group, who applied punk-inspired DIY ethic to performance art, collage graphics and home-made fashion (they have created their own stage costumes with cheap and recycled material such as plastic bags and gaffa tape, for example). They originally got their name when they earned some extra money at art galleries by hanging paintings to the walls, and someone quipped that they worked like "chicks on speed". They had their own club nights at Munich's Seppi Bar: Chicks on Speed had created an installation piece which was called "I Wanna Be A DJ, Baby", where they stood behind DJ decks and smashed records while a sound collage tape was playing. For this project they also put together a "box set" with a T-shirt, a cassette, a paper record and a fake interview for their "band", at this stage yet imaginary. During this time period they met Upstart (a.k.a. Peter Wacha) of Disko B record label who helped Chicks on Speed to actually get started in music.

Chicks on Speed's attitude, combining punk rock aesthetics and feminism -- inspired among all by the cultural criticism of such people as Situationists, Valerie Solanas or Stewart Home -- towards music-making is mischievous, prankish and not a little bit ambiguous; they have jokingly called themselves a "fake band", as a sort of parody of producer-led girl groups like Spice Girls. On the other hand they are very serious about running the whole business; with single and album releases, promotional videos, tours and their own record label, not to mention their art exhibitions, performances, fashion designs and similar activities. The ambiguity is about whether they want to remain an experimental art project or aspire towards being a pop act making it all the way to the charts.

The critical and audience responses to Chicks on Speed have been mixed: they have had their championing proponents -- such as British journalists Piers Martin and Jill Mingo (who works as their PR/press officer), and pHinn (who has maintained their extensive "Official Unofficial" fan site since 2000 at pHinnWeb) -- who think that their approach is fresh and innovative, not to speak about their dedicated hardcore fans, but negative comments have been heard too from the critics (often male) who think Chicks on Speed are just faddish and dilettante-ish, their cultural criticism only half-baked and contrived sloganeering (this was obvious, for example, by the less-than-enthusiastic reception their 2004 album Press the Spacebar had among many critics). The worst audience response to Chicks on Speed was probably had when in June 2004 they played as the warm-up act for the Red Hot Chili Peppers' UK tour, which reached its climax at Hyde Park, London: Chicks on Speed were bottled off of the stage virtually on every date by the Red Hot Chili Peppers fans who were less than understanding towards the Chicks' art-punk attitudes and their Hymn "We Don't play Guitars".
The 2004 Manchester UK needs to be seen on context, Anthony Kiedis criticised the audience reaction to the Chicks without realising that such a reception in Manchester is often an indicator of future long-term success, for example the 1966 reaction to Bob Dylan ("Judas") and the Sex Pistols Lesser Free Trade Hall gig (?That's rubbish! We could do so much better than that.")
Chicks on Speed's very first release was the cassette Analog Internet in 1997 on their own Stop Records. Their first vinyl release, Warm Leatherette 7" (1998), was a stripped-to-the-bone cover version of Daniel Miller's 1978 song he recorded as The Normal. The record was produced by Tobi Neumann, with a backing track by Dj Hell. In 2000 the band relocated to Berlin. Chicks on Speed have toured all over the world: in Europe, Americas, Australia and Asia. As additional live members have been Ann Shenton of Large Number (ex-Add N to (X)).

Chicks on Speed have released the albums The Un-Releases (2000) (a compilation of rare tracks), the debut album proper Chicks on Speed Will Save Us All (2000), 99 Cents (2003) (one of its tracks, 'Wordy Rappinghood', featured such guest vocalists as Peaches, Miss Kittin and Nicola Kuperus of ADULT.) and Press the Spacebar (2004) (together with Spanish band No Heads and producer Cristian Vogel). Furthermore, in 2000 they released a four-track EP Chix 52, with cover versions of the songs by The B-52's. In 2001 was released another EP, with German postrock band Kreidler, called The Chicks on Speed / Kreidler Sessions. They have worked also with such producers as Glove (Tobi Neuman and Thies Mynther), Vienna's Cheap Records artists Christopher Just, Patrick Pulsinger and Gerhard Potuznik; also Ed DMX of DMX Krew, Hecker, Mika Vainio and Pan Sonic and others. Chicks on Speed also appeared as guests on the live album of Finland's Club Telex Noise Ensemble. British band Sand and Finnish Pan sonic are some other artists they have performed with live. Chicks on Speed have had close contacts with the people of Vienna's Mego label, and have created cover art for both albums of Fenn O'Berg. Fashion designer Karl Lagerfeld did a photo session for the sleeve of their Fashion Rules single (2002). COS have also collaborated with other fashion designers, Jean Charles de Castelbajac and Jeremy Scott.

COS have released cover versions from the songs of such artists as The B-52's, Nick Cave, Cracker, Delta 5, Malaria!, David Bowie and Tom Tom Club.

There are music videos for Chicks on Speed's singles Glamour Girl (directed by Deborah Schamoni/Smoczek Policzek, 2000), Kaltes Klares Wasser (there are two versions of this: the first directed by Juliane Solmsdorf in 2000, the second for MTV's distribution by Deborah Schamoni/Smoczek Policzek, 2001), and We Don't Play Guitars (featuring Peaches, 2003). Chicks on Speed also have some more experimental type of videos such as Don't Work, Trade (2000), Trading Post (?), and Sellout (2001). Additionally, there is a one-hour length documentary video Chicks On Speed, A Retrospective (directed by Juliane Solmsdorf, 2001), consisting of home videos from the band's archives. Deborah Schamoni has made an experimental and surreal dance piece short film Visitors (2005), where Chicks on Speed arrive as aliens to New York City, slowely getting beaten up and eventually becoming homeless and losing each other, made for Deitch Projects, New York. Other new videos include 2 edits for the song Super Surfer Girl, by Mariah Garnet.

Chicks on Speed's first book, It's A Project, was published in 2004 by UK's Booth-Clibborn Editions: being a picture book type of collection of press clippings and personal memento, with a CD of rare and unreleased tracks, dress designs, and so on; all packed in a fabric bag.

Kiki Moorse, once collaborator of COS from 1998 - 2006 is currently pursuing solo projects www.kikimoorse.com

Press The Space Bar (With The No Heads)

The Re-Releases Of The Un-Releases

Chicks on Speed Will Save Us All