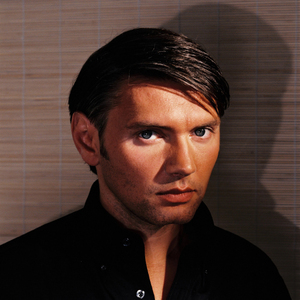 Born in 1968 in Vienna my career starts as a DJ in a Viennese gay bar called "Motto" in 1982. Together with my studio partner DJ PURE I create the project ILSA GOLD and release the first 12 Up on the label Mainframe in 1992. Catchy samples paired with an ironic breeze is the trademark of Ilsa Gold, the tracks UP and SILKE become celebrated anthems of the Rave- and Technoscene with numerous performances all over Europe following.

The release of the album DIE ZIPFELMUETZE, DER HANDWAGEN UND DIE GUMMIMUSCHI on our own label GSICHT WIA DA BEIDL VON AN OIDN MANN RECORDS in 1995 shows the God of Techno Sven Vaeth with a prick cap on the cover and provokes a middle sized scandal in Germany.

In the same time I publish serious productions on the labels Cheap, Pomelo, Labworks and test tube and found the the retro-hardcore label petra in 1996. With PUNK ANDERSON - SHAVE THAT PUSSY I herald the 80s trash revival and succeed with I'M A DISCO DANCER (Gigolo / XL) in the worldwide clubscene. With the persiflage of a frustrated electronic nerd called GERHARD I shine on the label Wiener Stadtwerke and as ROY EDEL I foresee a sad and folksy future to rave-music. In the following years my activities are limited to remixing, amongst others Pulp, Chicks On Speed, Stereo Total and Divine.

In 2002 I strike back with my own productions on Cheap and Giant Wheel and with ACID JOSEPH I cover the Ecstasy Club classic I LOVE THE ACID. For the ten year anniversary of Ilsa Gold I produce the double CD REGRETTEN? RIEN! on Mego and re-release my album Jeans & Electronic on the Combination Records' Forever Young series.
HOUSE 2 as a sequel to House appears on Cheap in November 2004 and I decide to focus all of my attention to the production of a long play record - my first since Jeans & Electronic in 1997.

ROLAND FLICK FAIRMONT PRINCESS ..1527 is the result, describing my present ideas about producing electronic music for more than one decade. The first take of it POPPER, followed by the Tricky Disco cover DISCO 128 is a co-production with my brother RAPHAEL and portrays the euphoric and innocent feeling of the first Techno parties in the early 90s - a time far away from the current postelectronic reflection.